"I was really frustrated by the way the [nudity ban] played out," said cowriter Conner Habib to The Huffington Post. "I like Scott [Wiener] a lot, but I don't think he was truly interacting with the community when he drafted that legislation. The whole thing was pretty ridiculous."

While the NSFW scenes were shot in more clandestine locations, the film's public nudity ban protest scene drew plenty of attention on Sunday.

"The actors and extras were holding these 're-elect Supervisor Scott Cox' signs and people were very confused," said Habib. "Everyone kept saying, 'I thought his name was Scott Wiener.' But eventually people were really interested."

According to Habib, the filming also give shunned local nudists another shot in the spotlight.

"Part of the idea was inviting people from the community to be extras in the fictional rally," said Habib. "A lot of the nudists who were there were excited to have a chance to speak since their voice has been stifled."

Did the crew manage to slip in any steamy scenes at Sunday's rally?

"I don't think we could get a permit for that!" laughed Habib. "But if you find out, let me know."

Check out some photos of the crew prepping for the film's protest scene in the slideshow below:

PHOTO GALLERY
'The Cover Up'
Download
Calling all HuffPost superfans!
Sign up for membership to become a founding member and help shape HuffPost's next chapter
Join HuffPost 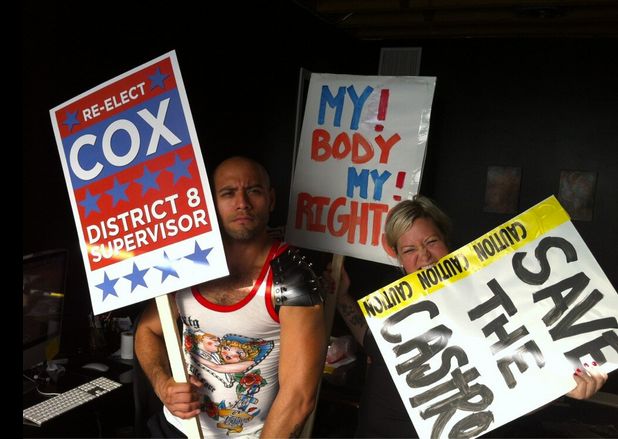