Deep in the heart of Texas, Gov. Rick Perry talks darkly of his state seceding from the union. Up in Washington meanwhile, in a Marriott "ballroom", the participants at CPAC gathering of the red-meat far-right have long since seceded from reality. This year the grand old coots were tea baggin' it old skool with the parodically racist, fluoride-fearing John Birch Society because, as the odious Noah Cross observes in Chinatown: "politicians, ugly buildings and whores get respectable if they stay around long enough". 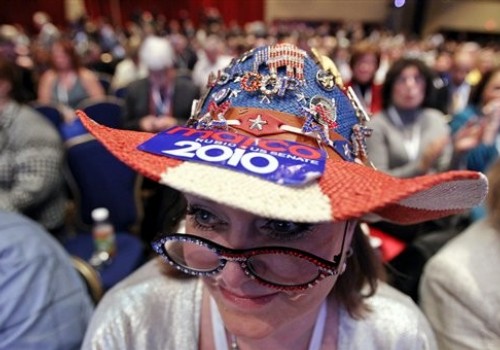 I don't really care about CPAC during the Olympics cycle, but like a horrific car-crash featuring asphalt liberally -- yeah, liberally -- smeared with brains and viscera, I can't tear my eyes away from it either. It's a cult, that much is obvious from the severity and doggedness of the group-think on display, one nation under a collective mass-delusion, saving their hosannahs for the most rigid of the ideologues onstage. It's also a zoo, featuring scarcely domesticated wild beasts with dripping maws and reddened fangs howling at the moon.

When Glenn Beck's onstage giving his keynote address, it's more like an NA meeting -- as it was when Rush Limbaugh gave his herky jerky, Jim Jones on speedballs imitation in 2009 -- and whenever Good Ol' Reb Jim DeMint gets near a microphone you wish someone would just stage a hostile intervention with a butterfly net and some masking tape. In the minds of some of the younger, heartier bucks, it's a Beer-hall Putsch for fratboys, with an evil new Weimar Republic howling its socialistic siren-song outside the meeting hall and all across the land (yeah, if only).

The Carnival of the Animals, The Insane Clown Posse, a night on Witch Mountain, Titicut Follies -- CPAC is all of these, and more. They call their gathering the Woodstock of True Conservatives. I call it the All-Ages Altamont of Angry Old Farts, a kind of Total-Estrangement-From-Reality Television. In an actual oxygen-breathing, factually-verifiable reality, though, it's the same old parade, the same full gamut of paranoid, hostile, geriatric gargoyles and dinosaurs, old-school Southern bigots, and attention-seeking young pretenders to the throne of Big Rightie, all doing variations on the same old political striptease for the rubes.

We had Tim Pawlenty trying to play the heavy and with his timorous, knock-kneed demeanor, it was a stretch for him -- and calling for all good and true patriots to smash the windshield of Big Bad Government with a not-so-metaphorical nine-iron, Tiger-style (always with the golf metaphors, these rock-ribbed suburbanites). We had that fool who called tax-hating Grover Norquist to the podium whilst referencing the maniac who flew his plane into the IRS office in Austin, TX, only the day before -- stay classy, CPAC! Pawlenty should take lessons in mean from Grandpa Cheney, who showed up unannounced and uncredited -- just like Kevin Spacey in Se7en -- to scare the little children and rile up the madly faithful after being introduced by his robotic daughter -- man, the bloodlust runs red and hot in that family's veins!

The pols who turned up pimping for red-meat votes included dejected has-beens like Rick Santorum and JC Watts (the JC stands for Julius Caesar, I kid you not), and snarling up-and-comers like Michelle Bachman and Marco Rubio. The NRA's Wayne LaPierre, the Pierre-Meter himself, Mr. Lawyers, Guns and Money -- favored us with his lysergic, parallel-universe retailing of the history of gun-control legislation, and bemoaned again the weight of the liberal-facist-guv'mint boot-heel forever pressing down on the nation's throat. All hail Dick Armey, a gravel-voiced Lee J Cobb of the Tea Party Conspiracy (Washington Branch), in fine fire-breathing form, and talking the veriest horseshit, as he often will.

And then there was that proudly homophobic young buck who chastised the conference for letting the gays in this year, then strutted the stage like some teenage nazi auditioning for concentration-camp guard, while calling out his enemies by name. You think he cares they booed him off? Wrong: his Fred Phelps-style over-the-top gay-bashing only seals his bona fides among the troops on the ground -- he'll be the king of his frathouse next semester, count on it.

And Ann Coulter -- who has been Cinderella at five minutes to midnight ever since Obama won -- emerged from her locked bedroom where she has been guzzling bottles of Chardonnay and dreaming up more loathsome shit to spew on the rest of us next time someone remembered to invite her before a camera. It feels like she's been gone for a decade already -- and no, I hadn't missed her at all.

Ann's been outstripped these days by the likes of Andrew Breitbart, who can take a common little crook like James O'Keefe and act like he's the risen ghost of Woodward and Bernstein. Breitbart is your basic liberal-apostate right-wing hustler and he's perfected Coulter's abysmal schtick of throwing rhetorical hand grenades and slashing insults while simultaneously bitching and moaning about how mean everybody on the left is to "real Americans." His sense of victimhood and embattlement, the essential tool in rousing this angry, self-pitying audience, has been honed to a gleaming sharp edge. His behavior may seem outlandish, even unhinged, to those of us in the land of the sane, but at CPAC, you could mutilate kittens and puppies on stage and, with the right kind of self-pitying special pleading, convince the audience that the evil liberals made you do it.

But don't worry, in the final analysis there's nothing real about this ridiculous get-together except as political news-porn for the cable networks. You can tell that by examining the results of the annual straw poll they conduct of likely Presidential candidates for the next Big Show. It's about as legitimate and grounded in reality as the contest for World's Greatest Grandpa. This year the big winner was... Ron Paul- - and we all saw how he fared in the '08 Election (lots of noisy fans, none of them au fait with political reality. Result: nada) He was followed, at a great distance, by empty-suit weirdo Mitt Romney. And Sarah Palin limped in third with a dismal seven percent, so if she thinks she's the hard right's new Queen of the Night, she may have another thing coming. 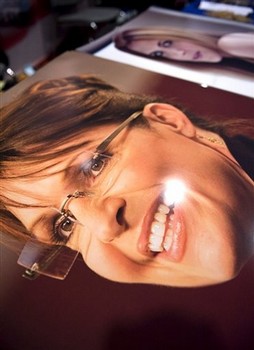