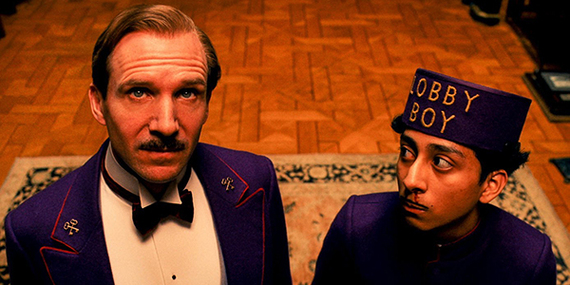 There's a real-life version of the Society of Crossed Keys! At least concierge life is nothing like a Wes Anderson movie... sorta.

Concierges have to deal with a lot of sh*t. I have a theory that we reveal the true versions of ourselves when we travel. Wait, let me rephrase that because I think it often happens unwittingly: I have a theory that the true versions of ourselves are revealed when we travel. And I think the people who hold up the metaphorical mirror, are all those who deal with us in our neediest, craziest and frankest moments.

Concierges in particular handle a whole lot of crazy, I think, and the stories are out there to prove that. People interact with them assuming confidentiality is a given, so much gets revealed. Often too much. And they have to nod and smile without a hint of judgment while making wild requests a reality.

Our interview with Isabelle Hogan
, head concierge at The Mark Hotel, shows that sometimes that the most mundane sounding thing can be much more than that in just a day's work:

One of my guests was 16 years old and her dad had given her $100,000 cash to go shopping. Because I had lived in Saudi Arabia myself and I was a woman the father asked me if I could go shopping with her for the day. So, we were in a stretch limo with her assistant who had the $100,000 cash in a briefcase. I remember, I was six months pregnant and we went from one store to the other and she was buying the same thing in different colors. We spent eight hours shopping.

Of course, there are drug requests.

Sure, the concierge is getting paid and even with a nice tip, that might only guarantee protection so far. Legally they're required to report any shady (illegal) activity. Reddit user UpUrsWBC
posted
:

(I get asked for drugs) on average about once every 6 months. Do you want anyone on the hotel staff knowing you're doing drugs in your room?

That also goes for prostitutes.

Concierges are supposed to stick to the law, as any citizen, in countries where prostitution is illegal. But that doesn't stop people from asking. Good concierges can find find creative ways to avoid the request. Concierge, Mike Holovacs,
explained
:

The only time you are allowed to say no is if the request is illegal, immoral, or physically impossible. I once creatively used this caveat to deny a member of a powerful NYC family a hooker for the evening.

Guy: "Can you get me a girl for tonight?"
Me: "I just read an article that 1 in 40 residents in this city are HIV-positive. With all due respect, if you want to go fishing in that lake, that's on you, sir."

This Quora user then added that the guy "palmed" him a $50 and then quietly left in response.

On a side note, I've also talked to concierges at prominent five-star hotels before who have told me they have awareness programs in place to watch for and report suspected human trafficking violations. Concierges to the rescue! That makes me feel good.

People have some really unpredictable whims. Like, you can't make this stuff up.

The strangest request one ex-Ritz Carlton concierge ever fulfilled, per Reddit:

A bowl of lychee nuts delivered to the sauna filled with nude guests (men).

Or maybe it can be made up.

Some wily guests have even put the concierge's meet-all-requests promises to the test, including one man's
strange, diva-like request
. It was still honored:

Three red M&Ms on the counter. Not packages, just three single M&Ms. One for me, one for my girlfriend and one to split if we get hungry late at night. And a picture of bacon on the bed. I love pictures of bacon.

Thrillist also recently posted about one strange let's-see-if-they-do-it Nicolas Cage request. A woman asked for her room to be decorated with framed photos of him when she checked in. And the hotel staff did it--no questions asked.

Savoy Butler training is just about the most prestigious hospitality training there is out there. (It happens in the UK, naturally.) If those butlers would talk... well, some of them have.

Thank god I'm not a concierge.

Those poor concierges. They have enough honest-to-god crazy to deal with. As for the Society of Crossed Keys, it's based on the very real Clef D'or, an international society of hotel concierges. Their insignia? A set of crossed keys.