By Jackson Gates, Harvard Class of 2019 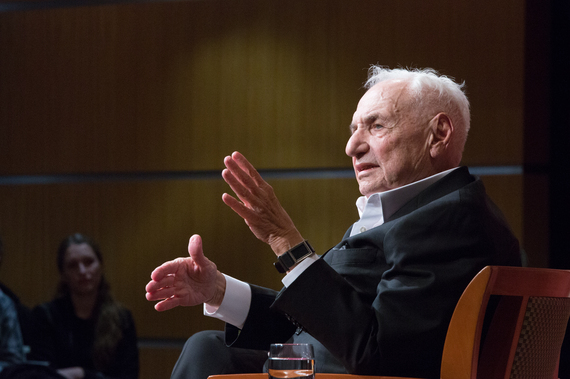 Frank Gehry's visit to the John F. Kennedy Jr. Forum had many members of the Harvard community, myself among them, thrilled to hear one of the great architects of our time discuss his work. His work, after all, is responsible for his fame.

While this seems an obvious, if not unnecessary, point, I left Gehry's event struck less by his work and more by the man behind the spectacularly creative and forward thinking buildings. That his character outshone his artistic genius speaks volumes about the impression Frank Gehry made on me.

Now closing in on the end of my first semester as a freshman at Harvard, my eyes have been opened to the success paradigm we've fostered here at Harvard and in the U.S. at large. The subject of our culture around success is controversial and oft discussed, and it is not my aim to launch into a thorough critique of such a nuanced and complicated issue; I would, however, like to touch on one facet of this culture in light of beginning to understand the person behind Frank Gehry's fame.

Over the course of my brief time here, I've been counseled on, warned about, given tools to deal with, and received care packages specifically designed to counteract stress. It seems to be the primary concern of both the faculty and the students, what parents most worry about for the kids, and, ironically, routinely heralded as the catalyst for success. While Harvard's lineup of impressive alumnus undeniably speaks to stress' capacity to enable achievement, Frank Gehry illustrated for me how stress is only one of many paths to success, and that the rewards of arriving at success by other means are all too often overlooked.

Before he began to answer questions, a video of Gehry reciting a letter he wrote to himself was played for the audience. The letter recounted some of the achievements Gehry was most proud of, the lessons he'd learned over the course of his career, and his hopes for himself going forward. The video was simple, powerful, and beautiful; I was already impressed before he closed the letter with "it's about people, so make buildings for people".

The profundity of this simple phrase shook me to my core. Having attained the sort of success the pressure cooker system strives to produce, Frank Gehry closed his letter to arguably the world's greatest architect by reminding himself that the success and the fame are not what count in the end.

Frank Gehry was a soldier and a truck driver before he was famous. Gifted in a wide array of artistic disciplines, he elected to become an architect not necessarily because it was the discipline in which he was most gifted, but because "people don't often equate architecture with social consciousness". Frank Gehry, from the heights of achievement, helped remind me that the pressure-filled tunnel to success is an illusion; success might be patiently waiting for us right outside the confines of stress, and we need only to open ourselves up to the idea that Harvard's way might not be the only way.