The Creative Vitality Index (CVI), created in 2002 by the Western States Arts Federation (WESTAF), in cooperation with the Washington State Arts Commission, and the Seattle Office of Arts & Culture. CVI helps communities understand and articulate their creative status, and the "area's economic landscape." 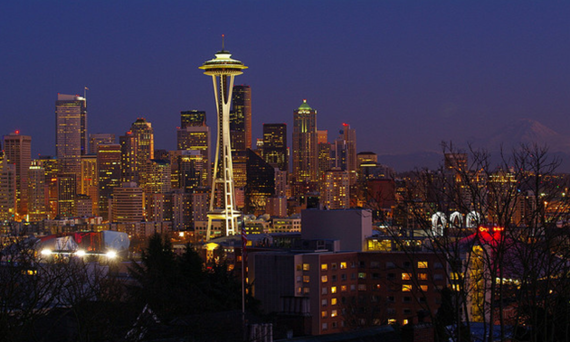 According to Bryce Merrill, of WESTAF, the CVI was beta tested for almost two years in Seattle. By 2004 the CVI was being used by more and more cities (now, for as little as $3500), as the best way to measure the creative vitality of a region, and to better understand what the creative sector was contributing to the local economy.

Art and Culture Districts--with a critical mass of art galleries, theaters, cinemas, music venues, and public squares for performances--are fast becoming the secret to ensuring a vibrant economic activity in our cities.

More often, such places attract restaurants, cafes, retail shops, offices and residences and are foreshadowing a whole new economy based upon creativity and innovation. But financing and funding these new districts is not well understood. Moreover, convincing politicians and citizens that such districts, indeed, all art and culture institutions, are key to increasing the number of creative jobs and creative industries, is a challenge.

The contribution such amenities provide to strengthening the fabric and the economic prowess of the larger community requires constant marketing, continuing analysis and measurement.

Today, using "nearly 100 different vetted national, and third-party data streams", the CVSuiteTM offers an accurate measure of the health of a region's for-profit and nonprofit creative economy." The CVI can tell where people are finding the creative jobs as measured by 59 occupations, in over 78 creative industries, what the per capita income is, and how the region is doing in this new and growing sector of the economy.

As more and more cities are asking themselves what more can they do to attract, retain and nurture the creative workforce--and the creative industries--one way to make a difference is to encourage the development of art and culture districts, particularly downtown, which has become the "living room" for communities across the country.

These benchmarks help generate investments, not to mention gifts, grants, and policy for the region.

The idea for such districts however, can come from almost anywhere or anyone. It is clear that such investments, particularly, mayors or chambers or other leaders within the community cannot create art and culture districts, unilaterally. Rather, a successful district only evolves if a network of creative workers, art and culture and economic organizations, developers and architects and others come together to explore their joint interests, develop a vision and a strategy for reinvent their community for the creative age.

Fortunately, Americans for the Arts(AFTA), who as early as 1998 researched the emergence of such districts in which the arts were used as part of a strategy for revitalizing cities, has now launched an even more ambitious effort. A plan to produce an update of the earlier report with Issue Briefs, and more importantly, an ongoing effort inviting mayors and other city executives, architects, city planners, and experts in the field to help cities and towns reinvent their community for the new age, represents a major leap forward. Not to be confused with WESTAF's CVI, AFTA also produces an index to let people know how well the creative sector is doing nationally and locally.

More recently also, the National Endowment for the Arts (NEA) have supported 190 projects totaling more than $16 million in all 50 states and the District of Columbia.

Together with ArtPlace, a non-profit composed of the NEA and major philanthropic institutions that have traditionally funded the Arts, the nation's largest banks and eight federal agencies are helping communities reinvent their downtown and neighborhoods.

ArtPlace, has been even more aggressive, awarding a total of $42.1 million in 134 grants to 124 organizations in 79 communities across the U.S. (and a statewide project in Connecticut).

These grants, important as they are, are only part of the picture. What each state, each community--city or town--does to bring differing interests, differing people together is essential.

According to the National Assembly of State Art Agencies (NASAA), Arkansas, Colorado, Kentucky and Massachusetts are the most recent state agencies to establish such initiatives. Eight other states recognized such districts as tax free enterprises and have adopted similar efforts. The appointees, usually loyal friends of the elected Governor, don't often take on issues of local economic development. But this seems to be changing, as many appointees are visionary leaders, action oriented, and making their voices heard.

States use a variety of tax incentives to encourage business development within local cultural districts. Examples of state incentives include sales, income, or property tax credits or exemptions for goods produced or sold within the district; or preservation tax credits for historic property renovations and rehabilitation. Maybe a state will offer an amusement or admission tax waiver for events within the district. All the plans vary.

All these projects are, in a sense, the new incubators of creativity, by both luring the creative class to such places and by adding significantly to the establishment of a thriving creative sector, increasingly seen as a powerful economic development asset.

At a time when creativity and innovation have become key indicators of success in the new knowledge based economy, the look and feel of our cities is a vitally important measure of how a city sees itself, and how well it is meeting the challenges of a very new age.

These are the essential ingredients to nurturing, retaining, and attracting the creative workforce America needs.