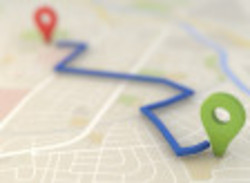 I am not the most technologically advanced guy, but I have surprisingly embraced the GPS function of my phone -- a little too willingly for my taste. I was once a map man, capable of reading and remembering routes and shortcuts that could get me from point A to point B in the most efficient manner. I still like to show off my short cut prowess when I approach the George Washington Bridge, and most times can avoid the long lines at the toll booths when I cleverly take an end-around exit that few people seem to know about. Try and find a local road map today and you will see how apparently obsolete these treasure troves of information have become.

Having recently moved to the Atlanta -- a city notorious for its congested roads and a place that has developed in a typically sprawling, nonsensical fashion -- I can testify to being frustratingly turned around and moving in the wrong direction of my planned destination on more than one occasion. The unfamiliarity of the local terrain, the lack of a grid and roads that change names, have all been stubborn deterrents to taking trips, even local ones, without the aid of my GPS.

With continued use comes dependence, and like living with a brace, when you finally take it off and walk without one, it can be unsettling. I never wanted to become one of those road ignorant idiots who blindly follow the voice of the woman squawking politely in her English accent from some electronic device. "Make the next right turn; merge left off the next exit."

Slowly, that is exactly what I have become.

It is alarming how easily I was lulled into the comfort of believing I had an infallible friend on board; an all-seeing, all-knowing, road omnipotent that could make all the right choices for me, leaving my brain free to ponder the myriad of other distractions that confront me when I am driving.

The sad truth is my blind dependence on technology has created its own anxiety. How many times do I aimlessly get directed down some crowded road that could have easily been avoided? The slightest effort on my part -- exploring, studying alternate routes, consulting a map, even daring to follow that guy that seems to know his way around the congestion -- could easily remedy this enslaving behavior.

My dependence became most apparent this past weekend when I went to my son's wedding in New Jersey and rented a car. Now I am unabashedly a Jersey boy. I was born in Jersey City and spent my first 25 years in Rutherford in the shadows of the Meadowlands and New York City. I cut my driving eye teeth motoring on the roads of Bergen, Hudson and Passaic Counties, and often made excursions to the Jersey Shore and points south, as well as upstate New York, and of course N.Y.C. and Long Island. Well, clearly I wouldn't need a GPS for my travels on this weekend. After all, this was my home turf!

Despite having lived in Connecticut much of the last three decades, I was convinced my muscle driving memory would go on auto pilot when needed. But after venturing from Newark Airport to points east and south, I found myself increasingly uncomfortable with my internal compass. Sure I knew the general direction of my intended destination. One could always rely on the old adage, "The sun rises in the east and sets in the west," but as I made my way from the six-lane super highway to more unfamiliar side roads and streets, I found myself grabbing for my phone's GPS to verify my route and get my ETA. It was a moment of clarity as well as a feeling of comfort. I realized how totally dependent I had become on the new technology, and I wondered if we all weren't falling into this same false sense of security through technology?

I guess it is inevitable that when we cede our involvement in our decision-making, no matter how seemingly inconsequential that involvement may be, we step-by-step create a world where things are handled for us. People have routinely let their medical doctor make consequential life decisions for them without ever questioning the soundness of their doctor's advice. Medical professionals are increasingly allowing bio algorithms to dictate what type of medicine should be prescribed, often without tailoring the information to the patient. Computer generated trades on Wall Street have sent markets into wild swings that have no economic justification.

So, in essence, we have given the designers of time and thought saving applications a grave responsibility. We have implicitly allowed them to choose for us what presumably will be in our best interests. I, for one, find the natural progression of that prospect extremely scary and amazingly it is all self-imposed!

Google, Amazon and Facebook do this all the time by mining our data, targeting us with custom advertising and even creating profiles that in practice could rival ones that our intelligence agencies keep on criminals and terrorists.

And here is the thing: We all are complicit in allowing this to happen. So next time when you turn on your GPS or phone, which by the way pin-points to within twenty feet of where you are at any time of the day or night, remember the power you are ceding to that vast network in the sky. Do the powers that operate that network really have our best interests in mind or will they one day decide to direct us all to drive off the proverbial cliff? I, for one, will be dusting off my old Rand McNally road maps