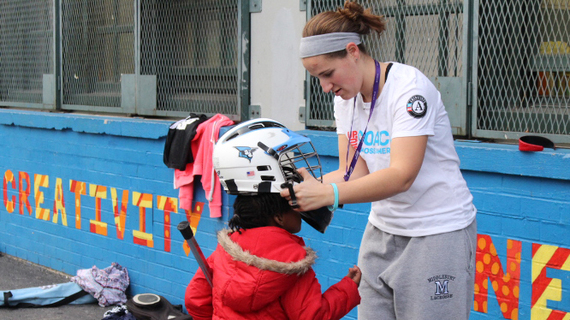 Today, a child waking up in a low income urban community is four times less likely to play sports after school than a child waking up in a more affluent community a mile down the road. Today, kids who should be kicking soccer balls and swinging baseball bats after school, instead, will spend part of today hanging out on the street or getting locked in their apartment by a parent who has no other option for ensuring their safety.

Youth sports have become de-prioritized in a public education system that is measuring itself exclusively by whether or not a child can pass a standardized test. The result of this "all-hands-on-test" philosophy is budget cuts aimed increasingly at "non-essential" programs like sports. This is a crisis. Not because we are failing to cultivate a future Olympic gold medalist or NBA star, but because it hurts our public schools and our communities. We know from numerous studies that youth who play sports have more positive outcomes than those who do not. Youth athletes are less likely to join gangs. They are less likely to get in fights at school, and they are less likely to carry weapons. Student athletes also exhibit stronger executive function skills that are associated with greater academic performance and they experience less anxiety and depression, which are linked to substance abuse and teen suicide.

Solving the crisis of sports in inner-city America requires that we raise public awareness of the problem and its consequences for the well-being of America's youth. Sports are essential to academic success, community safety, public health and even our economy. After all, the cost of hiring a coach in the south side of Chicago can save taxpayers as much as twenty-nine times that amount in dollars saved from kids being incarcerated or dropping out of school.

Revitalizing youth sports will also necessitate more public-private partnerships to invest in sports in just the same way that these investments impact education, the environment, and our public infrastructure. This kind of investment is largely a human capital one because sports programs require coaches. That's where AmeriCorps comes in. AmeriCorps is a program of the Corporation for National and Community Service that engages 75,000 Americans each year in intensive service in nonprofits, schools, public agencies and faith-based institutions. This federally funded agency has been the catalyst for addressing many societal needs, and now it can be credited with one more: the formidable task of saving youth sports. Through AmeriCorps, Up2Us Sports launched a program called Coach Across America, which hires and trains young adults to be coaches for at-risk youth in underserved communities. Nearly 2,000 coaches have been trained in major cities across the U.S. and have helped launch and expand sports programs in more than 240 urban communities. Private companies play a major role in the effort. Health corporations match AmeriCorps funding to provide coaches to address childhood obesity. Professional sports teams match AmeriCorps funding to hire coaches to reduce community violence. Defense corporations match AmeriCorps funding to hire returning veterans as coaches. Each of these public-private partnerships also provides jobs to the thousands of young adults who use their coaching roles to launch careers in health, recreation and nonprofit management.

The work to address the crisis of youth sports has just begun, but the foundation laid by AmeriCorps to leverage corporate investment is making a tangible difference. Today, nearly fifty thousand youth are waking up excited to go school because they know they have a team they belong to and a coach who cares about their future. That's the unique power of service and the impact of those corporations that invest in it.