You'd think -- given the sophisticated sorts of folks who annually attend the Berlin Film Festival -- that this wouldn't be the sort of crowd which would enthusiastically embrace something as crass-sounding as The Croods.

But that's actually what happened last Friday night at the world premiere of this DreamWorks Animation production. As the credits began to roll for this out-of-competition screening, an audience of 2000 got to its feet and began to applaud wildly for this silly, sweet yet surprisingly sophisticated animated feature.

And while all the DWA & Fox who were on hand for the world premiere of The Croods were thrilled with the reception that this new feature-length cartoon received, no one was more excited -- or more relieved -- than the film's two directors, Chris Sanders and Kirk DeMicco. 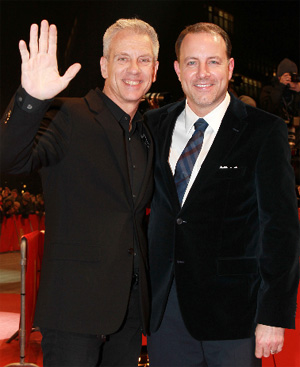 For Kirk, Friday night's screening was the end of an especially long road. You see, he'd been working on this particular project since May of 2005. Back when this DWA production was originally supposed to have been done in stop motion by the talented artists at Aardman Animations.

"Back then, this film had a different title: Crood Awakenings," DeMicco explained.

Its story also had a somewhat different slant. My co-writer on that earlier version of this project -- Monty Python's John Cleese -- is deathly afraid that technology is ultimately going to ruin civilization. So we were looking to use this battle of one-upmanship between two cavemen as a way to comically illustrate this concept.

But as often happens with animated features, as Crood Awakenings moved through DWA's development pipeline (More importantly, as Aardman Animations stepped away from its five-picture deal with DreamWorks Animation in January of 2007), the storyline of this prehistoric comic adventure began to change. Gradually shifting from being about a single caveman (i.e. Crood, Leader of the Hunt, who felt threatened when a more evolved caveman arrived on the scene armed with radical new inventions like fire) to being about this family of cavemen who were struggling to survive in a world fraught with change.

This movie really doesn't have a villain. The thing that keeps pushing our set of characters forward, that constantly challenges them is change. The very ground that they're standing on -- thanks to the continental split -- is constantly changing due to earthquakes and all of these great chasms opening up. So the only way that this family of cavemen can hope to survive amid this upheaval is by embracing change.

Which -- I know -- makes The Croods sound kind of dry, which this new production is anything but. You see, Kirk and Chris have set their story in the Croodaceous Period, which is this yet-to-be-discovered prehistoric era when a lot of the species that we know today were still going through some pretty wild permutations. So the skies were filled with colorful creatures who were part sea-turtle and part parrot. And cavemen constantly had to be on the lookout for vicious owl bears or run for cover whenever swarms of piranha birds suddenly took flight.

Mind you, what makes a lot of the prehistoric animals that appear in The Croods so much fun is that they've been filtered through Chris Sanders' unique design sensibility. Anyone who remembers Disney's Lilo & Stitch, Toothless from DWA's March 2010 release, How to Train Your Dragon or who frequents Sanders' own website will know exactly what I'm talking about. 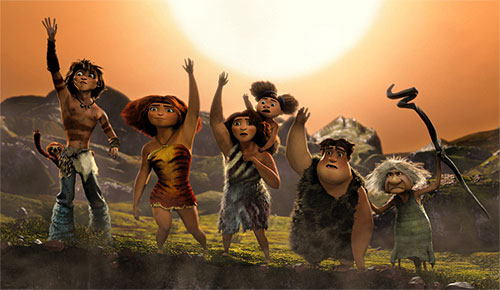 Getting back now to last week's world premiere of The Croods, what pleased Kirk and Chris the most, what made them feel that all of those years which they'd spent reworking this movie's story had ultimately been worth it, was the reaction that the audience in Berlin had to what happens in Act 3. Which is when (SLIGHT SPOILERS AHEAD) this animated feature makes a deft left turn. Transforming from a broad comic adventure which is loaded with slapstick to this sweet & sincere story where our caveman family is suddenly faced with some very real peril. And one member of this comical clan has to make a pretty huge sacrifice.

"We actually built this movie around that moment," Kirk explained.

We deliberately loaded the first two acts of The Croods with fun comic sequences because we wanted the audience to laugh and slowly fall in love with our cavemen characters. Just so -- when we get to that sacrifice in Act 3 -- the stakes are suddenly so high that the audience then can't help but get caught up in the emotion of the moment.

Based on the reaction that The Croods got at the Berlin Film Festival last Friday night, DeMicco and Sanders' story structuring gamble paid off. Which is why festival attendees came away from this world premiere of this new animated feature comparing it to some of the stronger titles that DreamWorks Animation has released over the past 15 years. Among them the original Shrek, the first Kung Fu Panda, and Chris's DWA directorial debut, How to Train Your Dragon.

So don't let the title of this distributed-by-20th-Century-Fox film throw you. Though DreamWorks Animation's The Croods may sound crude, based on the enthusiastic response that this film got during its world premiere last week in Berlin, this animated comedy has a sweet & sophisticated side. Which is why you may want to check it when this DWA production opens stateside on March 22nd.