On Monday, a turkey will board a flight from San Francisco to Washington to be pardoned by President Obama on Thanksgiving. Don't call him lucky though. If he survives the trip and the presidential paparazzi (and he may not), he'll almost certainly be dead by this time next year.

That's because the turkey, like the vast majority of slightly less fortunate birds Americans will slice into this holiday, came from a factory farm. Turkeys and chickens raised on industrial farms are bred to grow so large so quickly that their bones and organs can't support their weight. Each year, millions of them succumb to their own genetics before they even reach the slaughterhouse.

This particular turkey stands even less of a chance. He was bred and raised by Foster Farms, one of America's largest poultry producers and a company notorious for animal abuse and neglect.

Foster Farms is also known for shady PR tactics not unlike the corporate gimmick of the presidential turkey pardon. Many Foster Farms products are stamped with gold seals bearing the words "American Humane Certified." As a recent undercover investigation by my organization, Mercy For Animals, reveals, this seal is nothing but a scam.

Employed at a "humane certified" poultry farm, our investigators witnessed workers throwing newly hatched chicks onto the ground, ripping out live chickens' feathers for fun, and flinging birds as if they were doing basketball drills. Chickens were run over by trucks and thrown, punched, and maliciously tormented as they were slammed upside down into metal shackles on the slaughter line. All this before their throats were slit and many were submerged alive in tanks of scalding water.

But the blame here should be shared. The footage we recorded exposes a culture of animal abuse at Foster Farms, but it also calls into question the integrity of the accrediting body: the Washington-based American Humane Association (AHA). This organization declares itself "the nation's voice for the protection of children and animals." As the undercover video illustrates, that voice is of no help to the thousands of birds abused by Foster Farms.

For more than a decade, AHA has been slapping its "humane" certification on products from some of the worst factory farms in North America, including big-name turkey producer Butterball--another company we've outed for rampant animal abuse.

Under AHA guidelines, producers like Foster Farms and Butterball can cram thousands of birds into tiny sheds and deny them access to the outdoors. They can slaughter animals using outdated systems that force conscious birds to endure unimaginable pain--despite the fact that less cruel methods exist. And they can endlessly manipulate birds' genes to pit their own tortured bodies against them.

The partnership between AHA and its certified farms is one of the most cunning collusions in the food industry today. According to the organization's own survey, more than 75 percent of consumers are willing to pay more for "humanely raised" meat, dairy, and eggs. Thanks to AHA's meaningless gold seal, consumers will pay thousands of dollars this holiday season for products they believe were made without cruelty.

This Thanksgiving, countless Americans will also buy the lie that Obama's pardon guarantees a lone turkey many days of happiness ahead. But even more of us will gobble up the bigger (and far more egregious) lie that 46 million animals like him didn't suffer on the way to our dinner plates.

Nathan Runkle is the founder and president of Mercy For Animals, an international nonprofit organization dedicated to preventing cruelty to farmed animals and promoting compassionate food choices and policies. 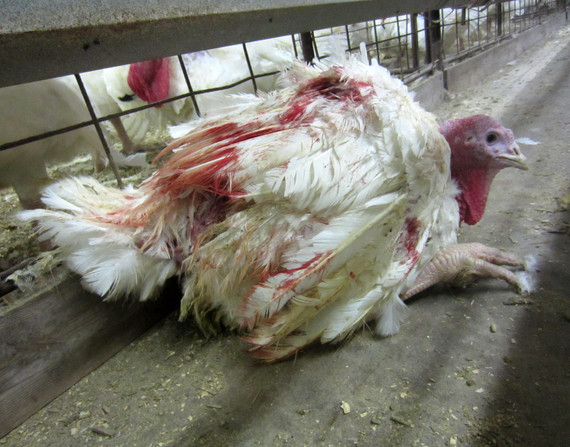