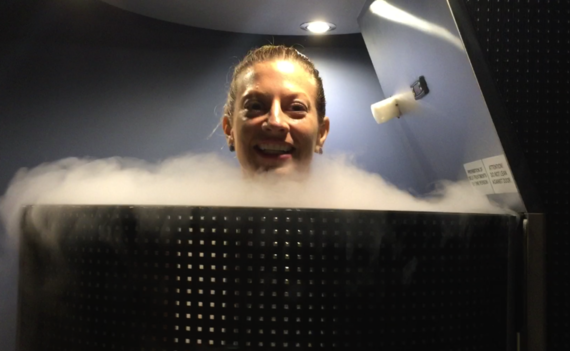 I'm not usually one for predictions, but I'm making an exception when it comes to the latest health craze sweeping our country. Cryotherapy, used throughout Europe for years now to treat and prevent multiple health issues, is starting to catch on in the US.

Whole body cryotherapy, which essentially means "cold treatment," (the Greek in me must point out that "cryos" in Greek means "cold" - and there you go!) is a procedure that exposes the body to temperatures colder than negative 200 degrees for about 3 minutes. The practice originated in Japan in the late 1970s when a Japanese rheumatologist used it to treat his patients painful joints.

Whole body cryotherapy involves stepping into a chamber almost naked for the cold blast of air. Local cryotherapy, used to treat inflamed or injured areas, involves the technician blasting cold air out of a handheld instrument to target the area.

Decreasing inflammation, redirecting blood flow to vital organs, and tricking your body into a "fight or flight" mode so that it boosts its immune system and metabolism are all claims of cryotherapy. It's true that the work your body must do in the hours post treatment burns energy; up to 500-800 calories per treatment.

These claims are based on the idea that after 3 minutes in freezing cold, blood circulation increases, metabolism boosts, post workout soreness goes down, and joint and muscle pains are relieved.

Ever twist an ankle? Regular icing is proven to decrease the soreness after.

After serious workouts, athletes are encouraged to dunk in an ice bath (even more stressful than whole body cryotherapy!) to decrease inflammation and post workout soreness. It is much easier to stand in a cryotherapy chamber for 3 minutes and be on your way.

Easier, but not cheaper.

At an average of $85 for a whole body treatment for whole body, few of us are in a financial position to add this to their fitness/alternative health/beauty regimen. Pricing varies depending on where you live. In some areas of the country, you can buy a monthly unlimited for around $300/month.

The fact is that, according to the FDA, cryotherapy is not intended to "diagnose, treat, cure or prevent any disease." Also, there is no formal accreditation or training to run a cryotherapy.

OK, so none of the claims are not yet grounded in credible scientific evidence, but that is largely because the studies haven't been done yet!

Cryo's effects, while short term, are real on a perspective level: most claim more energy and focus, a boosted metabolism, better tolerance to chronic pain, and faster-growing hair and nails. With local treatments of injured or inflamed areas, people claim decreased pain and increased mobility.

Those who use the local skin treatment for rashes related to inflammatory diseases such as psoriasis and rheumatoid arthritis swear by its improving effects over time. Likewise, those undergoing frequent cryotherapy facial treatment notice younger looking skin.

While training for my first ever marathon earlier this fall, I indulged in almost daily treatments, sometimes whole body and sometimes local on my pesky IT band and knee issues due to the stresses of running. I have to say I'm not sure I would have survived such a rigorous training time without those local cryotherapy treatments.

Not much medically - there have been no proven detrimental effects of cryotherapy if it is done in an accredited place with someone observing at all times. Of course this is as long as those with uncontrolled hypertension are properly vetted out beforehand when you fill out medical forms. Frostbite is also an issue if you enter the chamber with wet clothing. Both of these unwanted outcomes are avoided with blood pressure checks pretreatment as well as proper accompaniment during sessions. (An exhaustive internet search for "deaths due to cryotherapy" only yields a single case by an employee who entered the chamber alone without being accompanied in the room - leading to death by asphyxiation)

SO really no downside? Unfortunately the economics of it. Cryotherapy can be done once a day for whole body, with local treatments as often as you'd like. Few Americans can afford the routine use of these chambers. Considering the effects are short term, you would ideally want to go every day to treat joint pains in an acute setting, and almost every day over the long term if one is taking on a new fitness endeavor or weight loss goal.

First off, the lack of scientific basis so far really doesn't mean much - we need large studies done! Nothing has been disproven, it just requires a lot of from your wallet without the scientific backup just yet.

As for the claims, I am always cautious of a "magic bullet" philosophy. When it comes to health and wellness, we need to look at the big picture. A viable weight loss tool? Cryotherapy alone won't give it to you - for that you need real diet and lifestyle change. A way to better skin? Cryo facials may help, but they are no replacement for staying out of the sun, not smoking, and keeping hydrated.

Cryotherapy is already a powerful adjunctive therapy. This was clear to me during my recent frequent visits, which revealed the diverse and consistent patronage over months: wheelchair bound arthritics, young sufferers of eczema, injured weekend warriors determined to avoid surgery, and of course the fitness-crazed millennial with extra pocket change and a dedication to preventive health.

First, we need our government to take some of the billions of dollars we put into the pharmaceutical industry each year and invest those dollars into researching alternative health treatments like cryotherapy. A large prospective study (that follows a diverse population of patients over time) following cryotherapy treatments is sorely needed.

Studies that evaluate outcomes like how often injured athletes had to go on to surgery or how debilitating joint inflammation progressed over time with less or more medication. We must also look at subjective outcomes such as how cryotherapy patients reported improvement in depression, anxiety, and soreness.

Cryotherapy represents an important non-surgical, non-pharmaceutical way to treat many chronic diseases. It is also a potentially crucial adjunct to a generally healthy and active lifestyle.

If our country's federal agencies wake up to this as those of many European countries have, we can have more scientific data to backup the cryotherapy claims. And then, hopefully, health insurance will cover this amazing treatment!

After trying it out myself at the only cryotherapy chamber available in my large and diverse suburban NYC county, I am smitten! Check out my subzero encounter below.