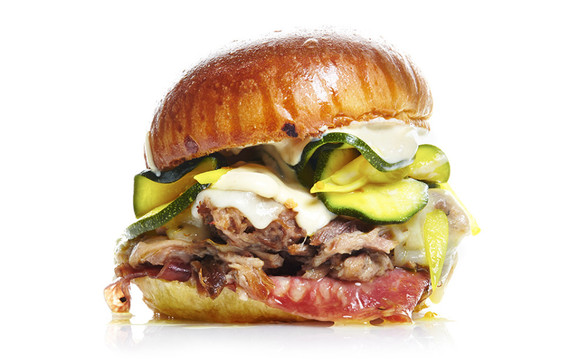 This sandwich is more like an epic feast between two slices of bread: pickles, onion, carrot, celery, pepper jack cheese, soppressata, and -- oh -- did we mention the braised pork shoulder? Yeah, you're gonna need an extra napkin.

CUBAN SANDWICH WITH ZUCCHINI PICKLES
Park 121 makes its own zucchini pickles for these messy (in a good way) sandwiches; substitute with thinly sliced dill or bread-and-butter pickles if you like.

Toss zucchini, onion, and salt in a large bowl and let stand until zucchini releases moisture, 30-35 minutes. Pat zucchini and onion dry and transfer to a large jar. Pour pickling liquid over vegetables to submerge. Cover and chill at least 12 hours.

DO AHEAD: Zucchini can be pickled 4 days ahead. Keep chilled.

SEE MORE: 7 Fried Chicken Mistakes You're Making, and How to Avoid Them

Transfer pork to a large bowl, reserving 1 cup cooking liquid, and shred with a fork. Add cooking liquid as needed to moisten pork (you may not use all of it).

Meanwhile, increase oven temperature to 400°. Mix mayonnaise and mustard in a small bowl and set aside.

DO AHEAD: Pork can be braised and shredded 3 days ahead. Cover and chill. Bring to room temperature before using.