After a wait of several minutes, the doors of a no-frills construction elevator open precisely at noon. We enter the metal-framed box that scales the outside rear of the Royal Opera House (Kungliga Operan) of Stockholm, transporting us from the street to our rooftop destination, The Electrolux Cube.

At the end of the elevator ride, Ludvig Jureskog, tall, blond and immaculately attired in a black suit, greets us and the other luncheon guests with flutes of champagne. (We later learn he won last year's competition as Sweden's waiter of the year.)

Located in the historic heart of Stockholm, this neoclassical structure was built between 1892-1898, designed by Swedish architect Axel Anderberg. The views are more spectacular than we imagined. From here, we can see the massive Riksdagshuset (House of Parliament), the sprawling Royal Castle, and the bustling waterways of the Stockholm archipelago, comprised of some 20,000 islands.

The genesis of The Cube
Electrolux is a household name in America, usually associated with vacuum cleaners. But in Europe, the 90-year-old brand (which began in Sweden) is the choice supplier of kitchen equipment for fifty percent of Michelin-starred restaurants. (It's also the second largest appliance seller in the world, after Whirlpool.) In a stroke of marketing genius, Electrolux partnered with Park Associati, an innovative, Milan-based architectural studio, to design a nomadic restaurant that would create an international "buzz."

Two cubes were built to appear simultaneously in different cities. The first two popped up last year in Brussels, on top of the Parc du Cinquantenaire, and in Milan, above the Piazza del Duomo. Currently, cubes are in Stockholm and London (at the Royal Festival Hall overlooking the Thames.) Typically, it takes three weeks to set up the 1200-foot, glass and aluminum shelled structures but much longer to engineer the logistics and negotiate placements at iconic sites chosen for their classic appeal and spectacular views.

The intimate meals, served twice a day at lunch and dinner, are limited to 12-18 guests at each sitting so reservations are hard to come by. Some of the most outstanding chefs in each country (all of whom use Electrolux equipment in their own restaurant kitchens) are chosen to prepare the meals using the finest locally sourced, seasonal ingredients. 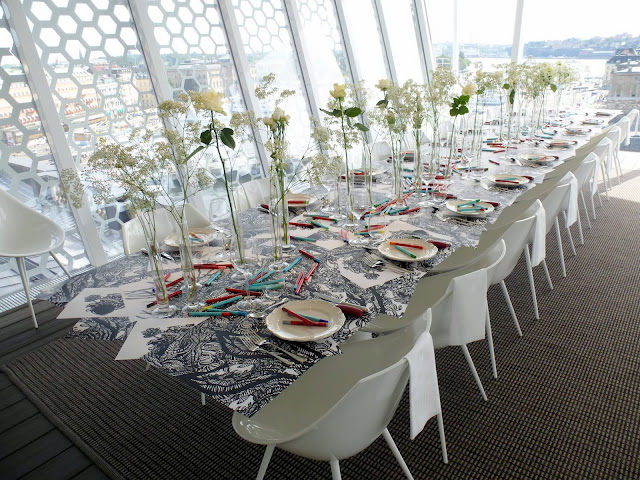 The table setting at lunch is informal but elegant

A succession of eight chefs will cook at the Stockholm Cube, including Mathias Dahlgren, Magnus Ek, Stefano Catanecci, and Klas Lindberg, the Swedish chef of the year. Our guest chef was Ludvig's brother, Johan Jureskog, Executive Chef of Stockholm's trendy AG Restaurang and Bar. 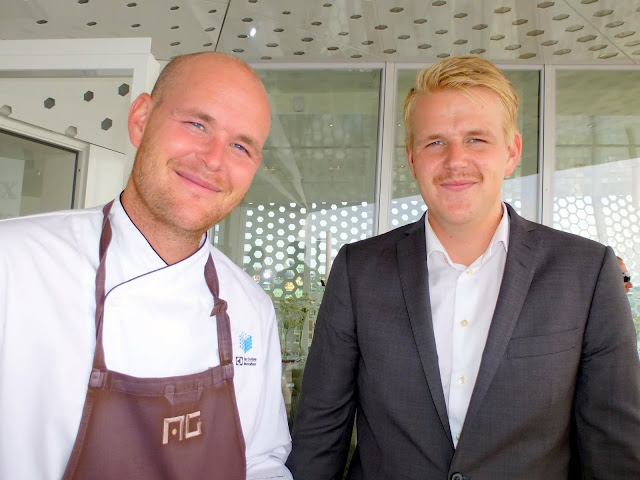 The tasty canapￃﾩs served on the sun-soaked deck included locally sourced steak tartar with dry aged fat, vendance roe, and silver onion; crispy pig's feet with a cream of vinegar and dill; and grilled heart of ox with beetroots and lemon. (AG is known for its wonderful preparations of meat dishes.)

The moveable feast
As we entered The Cube, the familiar musical theme to the TV series Dallas played in the background. The minimalist Scandinavian-style table, with molded white chairs, was informally set in white, with airy, floral centerpieces. Each playful place setting included colorful markers that encouraged scribbling on the paper placemats. After my second glass of wine, I forgot I was sitting in a lightweight, temporary structure perched on top of a tall building above a river.

The ambiance and size of our group of 12 made it feel like a dinner party with friends. The long table encouraged conversation and the open-kitchen with white Corian counters allowed the personable, bilingual chef and his small crew to explain each course as it was presented.

The leisurely three-course lunch began with a starter of quenelles of pike with crayfish, served with a sauce of crown dill and Vasterbotten cheese (a Swedish goat cheese that is nicknamed the Emperor of Cheeses). Crayfish season lasts only a couple of months in these cold waters and we were glad to taste this delicacy. 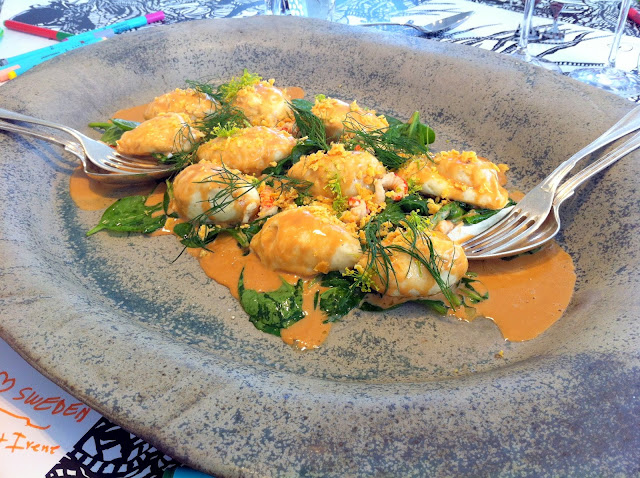 Quenelles of pike with crayfish 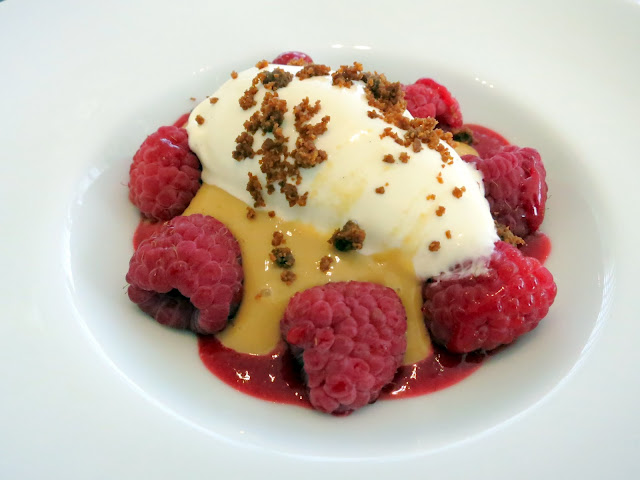 Getting there
Ironically, we snagged seats at this ultimate foodie experience by sheer luck. We arrived a few days before our Baltic cruise was set to depart from the Port of Stockholm. For three days, we explored the lovely sights and museums of Stockholm--by boat, bus and foot.

We learned that Stockholm is a pricey city to visit, making even Paris look like a bargain. A small bottle of water costs $3 to $5; a slice of bread and cappuccino at a cafￃﾩ, $30 for two; a light lunch and coffee at an outdoors cafￃﾩ near the Nobel museum ($140 for two including the tip). By the end of the long weekend, we had sampled a virtual smorgasbord of Swedish cuisine: reindeer, gravlax, cooked salmon, every kind of herring imaginable, meatballs and sausages, crispbreads (knackebrod), cinnamon rolls (kanelbulle), and lingonberry jam.

When we realized how often we were converting dollars to Swedish kroners, we made a pact to eat no more than two meals a day. But that afternoon, we went online at our hotel to find one more proper restaurant before our sailaway the next day. One click led to another, and we learned that two lunch seats were still available at The Cube for the last day of our stay. We hadn't heard of this pop-up before, but reviews suggested it was a once-in-a-lifetime experience, well worth the splurge. Our rationale: The price wasn't much more than the cost of dinner at any fine restaurant in Stockholm.

Where will The Cube pop-up next?
The meal was truly memorable in terms of ingredients, preparation, presentation and setting. I tried to pry the next locations of The Cube out of the Jureskog brothers but they wouldn't bite. Maybe they didn't know. The talk at the table was that Moscow or even New York, Chicago or San Francisco might be possibilities. Clearly, Electrolux has set the benchmark very high and the element of surprise is one of the key ingredients.

IF YOU GO
The Stockholm Cube ended its run on October 21, 2012; the one in London has been extended until December 31. Tickets, usually released a month in advance, are available online.