An Open Letter to My Trump-Supporting Friends

On this day before the election I am saddened and stunned, as I have been for months, that such a large fraction of Americans could be so easily suckered by Donald Trump. I probably shouldn't be, since I've read enough memoirs by former cult members to have a feel for the phenomenon, but it's frightening that we as a nation have come this close to embracing fascism. So here, I hope, are my closing thoughts on the subject.

To all my Trump-supporting friends, especially the Christian conservatives among you: What would it take to persuade you that you have been mistaken in your devotion to Trump? What evidence of moral turpitude, bigotry, cruelty, dishonesty, selfishness, impulsiveness, intemperance, ignorance, and incompetence on his part would convince you that he is unfit to be president? If your answer is "nothing would change my mind", then you are a cult member, not a truth seeker.

The first step in honest truth seeking is to admit to yourself that your current views may be mistaken and that you may need to discard some cherished and comforting beliefs if the evidence compels it. That hurts. It's the reason that truth seeking takes courage.

I won't recount the evidence against Trump, because you've already heard it. You dismiss each revelation with rationalization, or you conjure a new conspiracy theory that lets you sweep it under the rug. Only yesterday I saw Trumpsters on Facebook denying the reality of the KKK's endorsement of Trump, insisting that the KKK had made huge donations to Hillary, or that Bill Clinton was a Klan member. A good Christian Facebook friend of mine -- a sweet little old lady of my generation who shares charming cat videos -- invites Trump to grope her any time he wants. Others openly liken him to God himself. 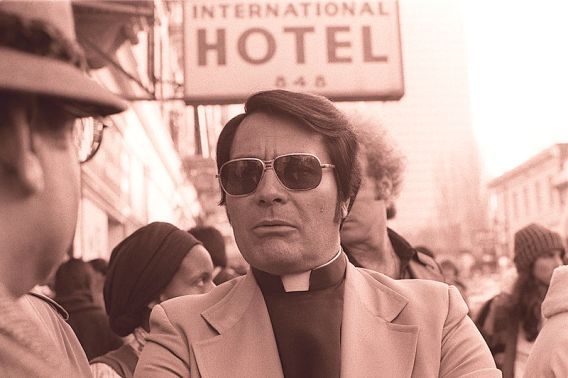 The Reverend Jim Jones at a protest in front of the International Hotel in San Francisco,1977. Image credit: Wikimedia: Nancy Wong.

Back in the 1970s, some fine church-going folks in my home state of California did much the same as their charismatic preacher gradually became more extreme in his sermons and in the way he treated his flock. Like the proverbial frog in the pot of slowly heating water, they never hopped out. Each act of heresy, physical cruelty, sexual abuse, financial exploitation, and pathological self-aggrandizement could be rationalized away. Follow that path far enough and you can end up serving cyanide-laced Kool-Aid to your own children, or showering starving, naked people of all ages with pellets of Zyklon B.

If we're lucky, reason will win out over alt-right group-think tomorrow, and I can go back to boring you with my vacation pictures.

Love and peace to all.