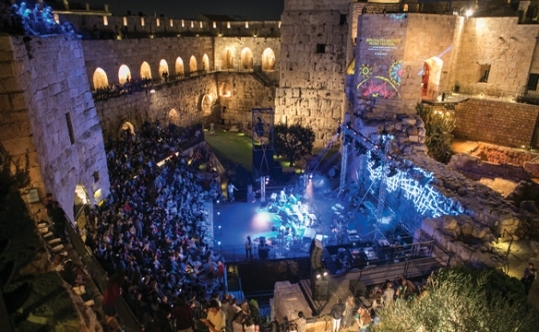 Although Jerusalem today is awash in cultural events -- including a light festival, an arts festival in the Musrara neighborhood and the Israel Festival, with its international dance, music and theater productions -- there is none as engaging, nor as engaged in the fabric of the city, as the Jerusalem Season of Culture (JSOC). The season runs from July 27 through Sept. 4 this year and, for the last five, has presented a series of unique, newly commissioned, site-specific theater, music and public art performances.

Much of last year's program was canceled in the face of the Gaza war, but JSOC is back this year in full force with several festivals that feature everything from sacred music to public art exhibitions to impromptu performances in guests' hotel rooms.

Together, these artists confront the continued tension and distrust among Jerusalem's residents by believing in culture as a healing and uniting force. As the JSOC website states: "The city has not yet returned to itself and is looking for a new direction. And right now, as we stand at the crossroads, we feel honored to sound the alternative voice that is rising up from this city, even in difficult times, and to be part of the creative process."

Recently, I traveled to Jerusalem at the invitation of JSOC to attend a press preview of its upcoming events. As I toured the city, attended performances and met with a variety of JSOC executives -- including Naomi Bloch Fortis, executive director; Itay Mautner, artistic director; and Tamar Gur, director of international initiatives -- I came to understand not only what JSOC offers this summer but also the vital part it plays in the cultural life of Jerusalem.

JSOC offers a vision of the city that is pluralistic, diverse, devoted and questioning of the status quo, yet immersed in and respectful of its rich history and traditions. It is the Jerusalem of pilgrims who visit the Church of the Holy Sepulchre, the Western Wall, the Temple Mount and Dome of the Rock. It is home to the Israel Museum (celebrating its 50th year) but also Al-Hoash, a museum of Palestinian art in East Jerusalem, and Raphie Etgar's Museum on the Seam, which features art born of conflict.

It is a foodie's Jerusalem -- home to such incredible restaurants as chef Assaf Granit's Talbiya and Ilan Garussi's Satya, and Old City favorites such as Lina, with its famous hummus, and Zalatimo's, which has been making the cheese-filled pastry known as mutabak since 1860. Then there's the remarkable Um Sami, who founded the Women's Cooking Collective to cook Palestinian dishes and support women in the Palestinian village of Sharafat.

It is the Jerusalem of an Orthodox male dance troupe and of distinctive vocalists -- such as Victoria Hanna, who made a hit singing the Alef Bet, and Mark Eliyahu, who plays an ancient Persian string instrument called the kamancha. It is home to musical collaborations with international artists as well as an independent music scene that plays out in gardens, homes, bars and clubs late into the night.

As Fortis tells it, the story of JSOC mirrors the recent history of Jerusalem. After the First and Second Intifadas, "A whole generation left Jerusalem," she said. While serving as executive director and co-artistic director of the Batsheva Dance Company, she had relocated to Tel Aviv and was spending more time in London and New York than Jerusalem. Then, some seven years ago, Fortis was approached to lead JSOC, which had been generously seeded by the Charles and Lynn Schusterman Family Foundation. Fortis decided, "OK, I'm ready to fall in love [again] with Jerusalem."

Similarly, Mautner, who co-founded Tel Aviv's Art TLV contemporary art biennial, returned to Jerusalem, saying, "The reasons I left are the reasons I came back," to be part of a cultural scene that is "artistic, deep, authentic, searching for truth." In JSOC, Mautner saw the opportunity, in his words, "to tell the unique story of Jerusalem in the language we speak: arts and culture."

The development of Jerusalem as a high-tech and venture hub, as well as Mayor Nir Barkat's belief that investment in culture would drive tourism, increased the lure of the city to young and secular Israelis. JSOC seized an opportunity to commission original work, including pieces that were site-specific to Jerusalem. In doing so, JSOC created an infrastructure for the arts and artists -- all of the festivals under JSOC's umbrella have artistic directors as well as producers, creating year-round work and cementing JSOC's role in sustaining creative life in the city.

This summer's JSOC is a series of grouped or themed performances, beginning with the In-House Festival, July 27-30. Artistic director Dafna Kron and producer Lia Lerer have organized events in artists' homes as well as other site-specific performances.

"The question of home is a huge, loaded term," Kron explained. "I invite artists and ask them what home is for them." Each performance takes place in a different Jerusalem neighborhood. "It's like chapters in a book," Kron added.

Among the featured performers are the creators of Radiolab, a radio program inspired by "This American Life," who will return to the apartment balcony where they first conceived of their program for a live show; Sami and theater director Hannah Vazana Greenwald will talk as they roll grapevines in Sami's village; artists will take over a public library; and a special sound and performance art installation has been created in the ruins of abandoned buildings in the village of Lifta.

JSOC takes over the Israel Museum from dusk to dawn on Aug. 6 for Contact Point, a night of public and interactive performances inside and outside the museum. Attend, and you just may find yourself dancing in the Billy Rose garden. Knock Knock takes place Aug. 10-13, when the Prima Royale Hotel rooms are taken over by guests, whose rooms become host to 40 artists and their impromptu performances. (Already sold out!)

Frontline, the independent music festival that runs Aug. 17-20, will broadcast from the courtyard of the Nevi'im ORT school with musician interviews, followed by live performances in the evening curated by Jerusalem music impresario Gilly Levy of Raash Hour and produced by David Kosher. Among the bands playing are Masters of Ceremony and Entrenched.

Under the Mountain (Aug. 25-28) is a festival of new public art that explores the contentious fault lines of Jerusalem and reveals them in new combinations to start a new dialogue. This year's theme, the Temple Mount, will offer artworks that, according to the JSOC, "will construct an alternative mythology" while highlighting "the architectural, artistic, archaeological, performative and symbolic significance of the mountain."

"We want to broaden the conversation, but in a delicate way," Mautner said.

Saving the most popular and tourist-friendly for last, the Jerusalem Sacred Music Festival runs Aug. 30-Sept. 4. This festival, Fortis said, is about "pluralism [and] how important it is to come together" and features six days of individual and collaborative performances by Jerusalem-based and world artists. They include Corey Harris, Omri Mor and Karim Ziad, Max Romeo with Zvuloon Dub System; as well as study sessions with Father Olivia Toma Winard, Sheikh Ghassan Manasra and Rabbi Tamar Elad-Appelbaum; and Kabbalat Shabbat with the Zion community.

The Sacred Music Festival, like JSOC itself, is meant as nothing more or less than "a huge umbrella of peace and tolerance," Fortis said. It's part of what makes JSOC -- in all its creativity, diversity and concern for Jerusalem -- more than a summer festival. It is an expression of Jerusalem itself.