Over the summer the Culture Wars flared up again, but in a new form. The old warfare had its roots in the 1960s but it was Allan Bloom's 1987 Closing of the American Mind that shaped the debate around the content of the college curriculum, especially the alleged displacement of the traditional canon of Western civilization by new content, such as cultural studies and theoretical approaches such as deconstructionism.

This summer's skirmishes targeted not content or theory but statistics. They began late in May when Harvard released a well-documented report on the Humanities, "Mapping the Future." Some of the report's figures showed problems specific to Harvard, others pointed to what seemed more widespread evidence of decline. The Wall Street Journal soon jumped on that part of the story, producing a graph labeled "Decline and Fall," and showing a decline in the percentage of degrees granted in the humanities from the late 1960s to 2010. This accompanied an article, "The Humanities Fall from Favor. "

The headline "Decline and Fall" seemed to say it all; soon conservative commentators started looking for culprits. David Brooks wrote:

Somewhere along the way, many people in the humanities lost faith in this uplifting mission. The humanities turned from an inward to an outward focus. They were less about the old notions of truth, beauty and goodness and more about political and social categories like race, class and gender.

So "people in the humanities," presumably teachers and scholars who no longer focused on beauty and truth were responsible for the alleged decline and fall of their fields. No surprise then when House Republicans proposed a 50% cut in funding for the National Endowment for the Humanities.

But then the blogosphere struck back. Ben Schmidt, now an assistant professor at Northeastern, went back to data from the 1950s and in his blog showed that the Wall Street Journal graph was seriously misleading. By beginning with the 1960s it started at a peak; much of the apparent decline was actually a return to the situation in the 1950s, as his graph shows: 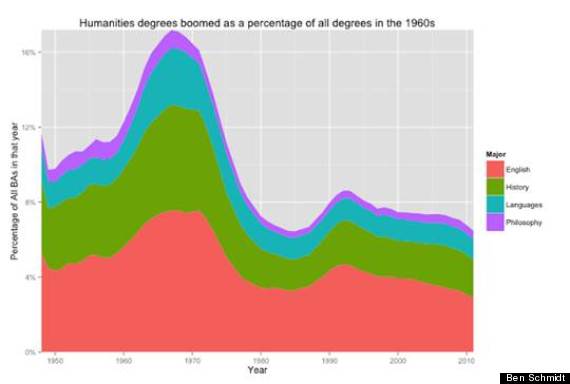 In fact, the "radical Sixties" were when the humanities flourished -- not what conservative culture warriors would have us believe.

Meantime, at the Times, Nate Silver in his 538 blog noted that as more Americans attend college "the distribution of majors has become more career-focused, but these degrees may be going to students who would not have gone to college at all in prior generations." Silver showed that the shift did not affect just the humanities. Math, for example, shows a steeper decline in majors than English.

Indeed most long-established non-vocational majors in the arts and sciences have shown a decrease in thepercentage of students majoring in them over the past half century. Of course they have. If there are now more majors to choose from, the typical field will show a percentage decline. And since the last half century has been a time of vast increase in human knowledge, some of it in the humanities but more spectacularly in science, medicine and technology, new fields of study had to be introduced into the curriculum.

My alma mater provided a test case of the change. The Hamilton College web site lists 52 fields in which one can now major; how many majors were there, I wondered, when I was a student over fifty years ago? The answer is twenty. The choices have more than doubled during that period. At Hamilton most of the added fields are in the creative arts, ethnic or identity studies, and the natural sciences. Some are in the social sciences, but only a few in the humanities. So, in a purely statistical sense, the percentage of degrees awarded in the humanities would be likely to decline over this period.

Hamilton, a private liberal arts college, is by no means representative of American higher education as a whole, but one major way it differs is in its resistance to the addition of programs aimed at specific careers, for examples Criminal Justice, Law Enforcement, Marketing, and Parks and Recreation. Many colleges and universities have added such majors. For example, you can now earn a bachelor's degrees in Mortuary Science at nineteen American institutions of higher learning.

These trends mean that the percentage of students majoring in a typical long established field will have declined over the past few decades. Does this provide a new weapon for culture warriors, or is it simply a fact of statistical life? A better indicator of the health of the humanities would be the total enrollment in the fields, but such data are not systematically collected, except by the Modern Language Association for foreign languages. Their most recent figures show a 6.6% increase in foreign language enrollments from 2006 to 2009, though with dramatic differences among the languages. (The biggest gains were in Chinese and Korean; the biggest decline was in Modern Hebrew.)

So humanistic fields are not all in precipitous decline, nor have all teachers and scholars in the humanities "lost faith in their uplifting mission." Such talk plays into the hands of culture warriors who want to turn the clock back rather than think in fresh ways about how the perennial value of these fields can be advanced and enhanced amid rapid demographic, technological, economic and cultural change. There's need for vigorous debate on this question, but little to be gained by more hand wringing or finger pointing about the alleged decline and fall of the humanities.