When you agree to give a talk at a conference, you never really know who's going to show up. So when I signed up to present at Vidcon this year, a presentation with the title: "Curation: The Secret Sauce To Scaling Video," I frankly didn't know who would be interested at the mostly YouTube focused event. Boy, was I in for a surprise. The full house of 350 was an engaged, smart group of creator who are now begining to think about themselves as curators as well. 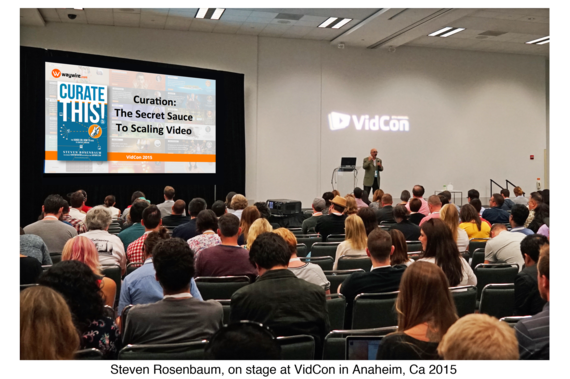 What's changed? Why is curation the new hot thing?

After years of promising to replace people with smarter algorithms, it appears that the battle is over. And, at least for the next chapter of the Web, humans have won.

There's been a flood of new product announcements from the biggest players YouTube, Facebook, Apple, Amazon, AOL, Flipboard, Snapchat and LinkedIn. Each of them promising to solve content discovery with a human curated product offering.

On the face of it, this is good news, even great news. Who among us hasn't been feeling the fatigue of content overload as the firehose stream of raw, unfiltered information overwhelms us? And, as much as we hunger for the newness and speed of instant publishing, the endless scrolling and channel changing has, at it's core, the endless "needle in a haystack" search for relevance.

Curation, on it's face, solves that.

But not all curators are created equal it turns out. And some of the products that have emerged in the rush to curation turn out to be more window dressing than truly human-centric solutions.

The question is simple: What is truly a curation solution, and what is a hastily conceived product enhancement with the word of the moment pasted on top?

Let's take a walk down curation lane and visit some of our newest neighbors.

Music is perhaps the most frothy new space. Back when I wrote Curation Nation, Colby Hall explained that really good curators were like DJs, creating a fresh new mix using tracks we've all come to know and love. At the time, Hall was Managing Editor of mediate, and now he's VP, Creative Director for iHeartMedia, so he's come to know a thing or two about DJs.

Apple's latest take on music, iTunes Music, is chock full of curators. If you tap on Apple Music Editors, Activities and Curators you can access human-created playlists. The Curator section includes music influencers, like Rolling Stone magazine, Pitchfork and NME. And over on Beats 1, Curator (dj) Zane Lowe is spinning great tunes and putting on a show. Conclusion: Apple gets it right by giving humans both a platform and a voice to DJ great music and with point of view.

Of course Apple isn't alone in curating music. Rdio has released a series of curated stations created by a combination of in-house and outside experts. As Rdio CEO Anthony Bay explains it, we are "offering the industry's most expansive array of computer generated and expertly curated stations customized for any mood, activity or genre." They are offering stations from "influencer" like country singer Hunter Hayes, Hype Machine, Consequence of Sound, A.V.Club, and Country Weekly. But they add fashion website Refinery29, and Yelp. Having non-music sites curate music makes no sense, and diminishing their understanding of curation. It's a bad call.

In the complicated area of News, the number of emerging "curation" products is growing dramatically. Early leaders in human curation Flipboard are doubling down in advance of Apple's announcement of a "Curated" news product that looks to be a direct competitor to Mike McCue's wonderful user-friendly content platform.

Curation is nothing new for the Flipboard, but the new "compose" tool allows magazine creators to take it one step further. According to Flipboard's blog, creators can now ask readers questions, comment on news stories, add personal photos and more. The tool also makes it easier for people to collaborate more effectively with other users on the platform and even offers them the option to create private group magazines. Marci McCue, the head of Marketing at Flipboard told 9 To 5 Mac: "You'll see us continue to invest in people curating on Flipboard -- not just our own editorial staff. That's why the product is so diverse and the quality of stories can be so rich."

Meanwhile at first look, Apple News seems to get it all wrong. The company is running ads for human editors to curate news, but here there appears to be no brand name curators, no public facing editorial voice, simply a fast moving feed of RSS news, with some editors filtering and sorting the news page. That's not curation, and it won't bring a new POV or news offering to the market. Fail.

But the two most interesting takes on curation are taking place at Twitter and Snapchat.

Twitter is finally acknowledging that the average visitor is overwhelmed with the shear volume and lack of clarity in the Twitter stream. Their answer is Project Lightning. Project Lightning is a hub that will curate Tweets on the platform centered around events, news and trends. This time around however, it's not an algorithm doing the heavy lifting. Twitter's put together a team of editors to "select what it thinks are the best and most relevant tweets and package them into a collection." The company is developing an editorial policy to assure content is reviewed before being included in Lightning. Lightning collections will include Vine and Periscope content as well. The lack of name curators, or trusted editorial brands makes this a risky also ran... allowing nameless, faceless curators to organize risks bland collections of safe, ad friendly content that doesn't share the unique voice and edge of the Twitter network. I'm skeptical here, as curators need to be more than 'info-workers' or they won't rise above algorithms.

On the other hand - Snapchat's Live Stories are already working. And Snapchat now has more than 40 human curators working on the Live Story team (up from 10) and features "multiple events per day." Live Stories feature users shared photos and videos of a live event or happening. Live Stories is 'live' for just a day. Now Live Stories is attracing about 20 million people in a 24-hour period, that totals ad space on a 20 million view story that can be worth $400,000 according to a report in Recode. For example the music festival Coachella's "LiveStory" drew more than 40 million unique viewers.

And while Snapchat curators are unknown, the powerful voice and POV of the content that they curate makes Livestories a great example of using human editorial to drive relevance and quality.

There are a number of other "human curated" news products launching. YouTube's Newswire will gathers and verifies eyewitness current events videos. The service is a joint project between Storyful, a News Corp-owned startup, and YouTube. And Linked in Pulse, which is added human editors to add a "human voice" to the product.

While lots of folks are working to integrate human editorial into their formerly algorithmic process, Pinterest was built to be human first. Said Pinterst CEO Ben Silberman "Search is a dissatisfying process. It is good at getting facts but it is not good at showing possibilities." For Silberman search isn't inspirational. It won't help us or shape our tastes and interests. "There is still something missing from search, it is great at facts but not as good at surveying lots of information or open-ended questions. It isn't good at questions in which the answers are different for me or you," says Silberman. The end goal is for people to feel as though "walking into Pinterest feels like walking into your favorite store", and that can only mean curated video is on the horizon.

Meanwhile, Amazon is taking a page from the Pinterest book, launching a curated product page named Amazon Stream. The ecommerce site has a lot of reasons for experimenting with new curation layouts. Amazon Stream transforms the conventional "search-led" online shopping experience into a more "browsing-led" experience that is closer to brick-and-mortar retail experience, as Silberman predicted. And much like media, in an a space with almost unlimited choice and selection - the need to find style and taste that is relevant and related can't be left to an algorithm.

There's no doubt that video is driving the trend from aggregation to curation. Video needs to be valuable on a number of related axis. Quality, relevance, timelines and voice all play a part. And as more and more video creation opportunities come on line, the need to curate quality to the top of the stack becomes more critical.

Yes, consumers want human filters. But they don't want nameless human filters. They don't want information workers, 'curating' for them, they want real people, with voices and passions, and faces, and personalities. They want Curators who drive a clear curation game plan and sign their work because they're proud of it.

Curation is -- to borrow a phrase from Soylent Green -- people!