What do a measles outbreak in Disneyland and Washington's panic over Russia's leadership have in common? Both of them are red scares that should have died out by the 1960s.

And, as of today, they have one more thing in common: junk science about autism. 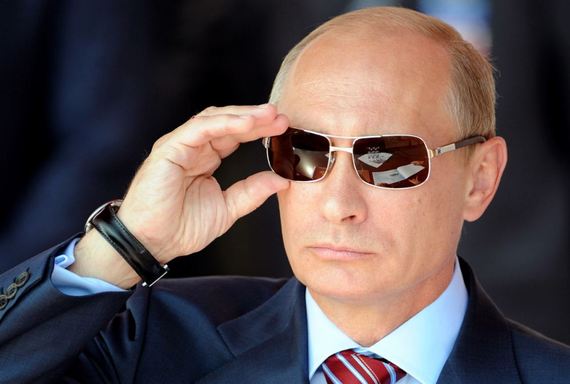 Newspapers, newsfeeds, and television broadcasts are inevitably subject to strange, almost transcendent moments of coincidence (along the lines of what Neal Postman disparaged as the "And now, this" syndrome). When I was a teenager, our local newspaper featured a front-page, banner headline about the latest in a series of horrific attacks: "Ski mask rapist strikes again." A few inches below was a fluffy feature photo about people making the best of the day's snowfall: it showed a man in a ski mask and the phrase "every cloud has a silver lining."

My personal world of media consumption is so saturated by Russia (the focus of my professional life) and autism (the preoccupation of my family life) that it takes me some time to recognize their convergence as something that isn't just going on inside my head.

My wife and I are nonplussed by the media's discovery of the "anti-vaxxers" in the wake of the Disneyland measles outbreak, since, as the parents of an eleven-year-old autistic boy, we see this as very old news. I've spent years forcing myself to be civil around people whose views on epidemiology appear to be informed by a cross between The Crucible and The Village of the Damned.

Now, as we watch would-be Republican presidential candidates trying to develop vaccine policy positions that would satisfy both moderates and their Flat Earther base, comes a report about a 2008 Pentagon study suggesting that Russian President Vladimir Putin has Asperger's Syndrome.

There are so many things wrong with this idea, I don't really know where to begin. Looked at most broadly, the report is an example of the unrelenting, wrongheaded demonization of Vladimir Putin. I say this as someone who despises Putin's government, particularly given the harsh approach to civil liberties that has characterized his third presidential term. And I certainly see him as fair game for criticism and satire. But the media have been obsessed with explaining everything that goes on in Russia as the personal handiwork of Putin himself, while indulging in the crudest forms of pathology to explain a person whom they can't understand as a political actor.

As disturbing as this story is for people who follow Russia, it's particularly outrageous for those in the disability community. It's one thing to pathologize a world leader, and quite another to find one's own medical, psychological, or social status invoked as a pathology. The implication is not only that Putin is difficult and deviant because of an alleged diagnosis, but that the diagnosis itself not only is, but must be seen as a stigma. Should we understand FDR's New Deal and his policies during World War II as a function of his inability to walk? And are the policies themselves "defective" by virtue of their "defective" source?

The "news" about Putin's condition broke thanks to USA Today ("Spoon-feeding you the news since 1982"), which got the report through a Freedom of Information Act request. In addition to providing the stunningly vapid insights of a specialist in "movement pattern analysis" (all the phrenologists must have been busy), USA Today cites the conclusion of a University of North Carolina psychiatry professor that "Putin carries a form of autism." The speculation includes the possibility that, as a child, Putin endured a "huge hemispheric event" (a phrase that is probably more applicable to his current foreign policy).

While I have to admit that many of us in the autism community do engage in speculative diagnosis, we would never commit ourselves to it in print (or expect to be paid for it). For one thing, a real diagnosis necessitates a clinical evaluation by a team of specialists. But if USA Today is representing this report at all accurately, we may be better qualified than the so-called experts consulted by the Pentagon:

Researchers can't prove their theory about Putin and Asperger's, the report said, because they were not able to perform a brain scan on the Russian president.

And if they were? There is no brain scan for diagnosing Autism Spectrum Disorder (the umbrella term that includes what clinicians used to call Asperger's). In any case, who needs a brain scan, when George W. Bush has already looked into Putin's eyes and seen his soul? Clearly, both Bush and the Pentagon's experts are used to seeing what's not really there.

The report's assertion is appalling even by Jenny McCarthy standards (after all, Putin is too old to be a "victim" of the measles vaccine). But it is useful for one thing: it reminds us of the lengths to which a moribund political establishment will go to come up with a totalizing explanatory framework.

This is far from the first time that Western elites have entertained themselves with long-distance diagnosis of Russian leaders. If some scholars and pundits are to be believed, we can understand both Peter the Great and Lenin as victims of syphilis, and Ivan the Terrible as suffering from either encephalitis or mercury poisoning (somebody alert Jenny McCarthy!) And space does not permit me to even begin talking about diagnoses of Stalin.

So, in the spirit of the report (and with extra brainstorming assistance from my old friend, Christy Prahl), I would like to propose some alternative frameworks that should be at least as trustworthy as a long-distance medical diagnosis by people ignorant of the diagnostic criteria:

The possibilities, of course, are endless, but they require information to which I don't have access. What food should Putin eat, according to the Blood Type Diet? Does it matter whether Putin dresses to the left or to the right? Presumably, he's been leaning right for years. And, oh, what the Pentagon wouldn't give for a Putin stool sample!

If only there were a reliable test for rank stupidity.