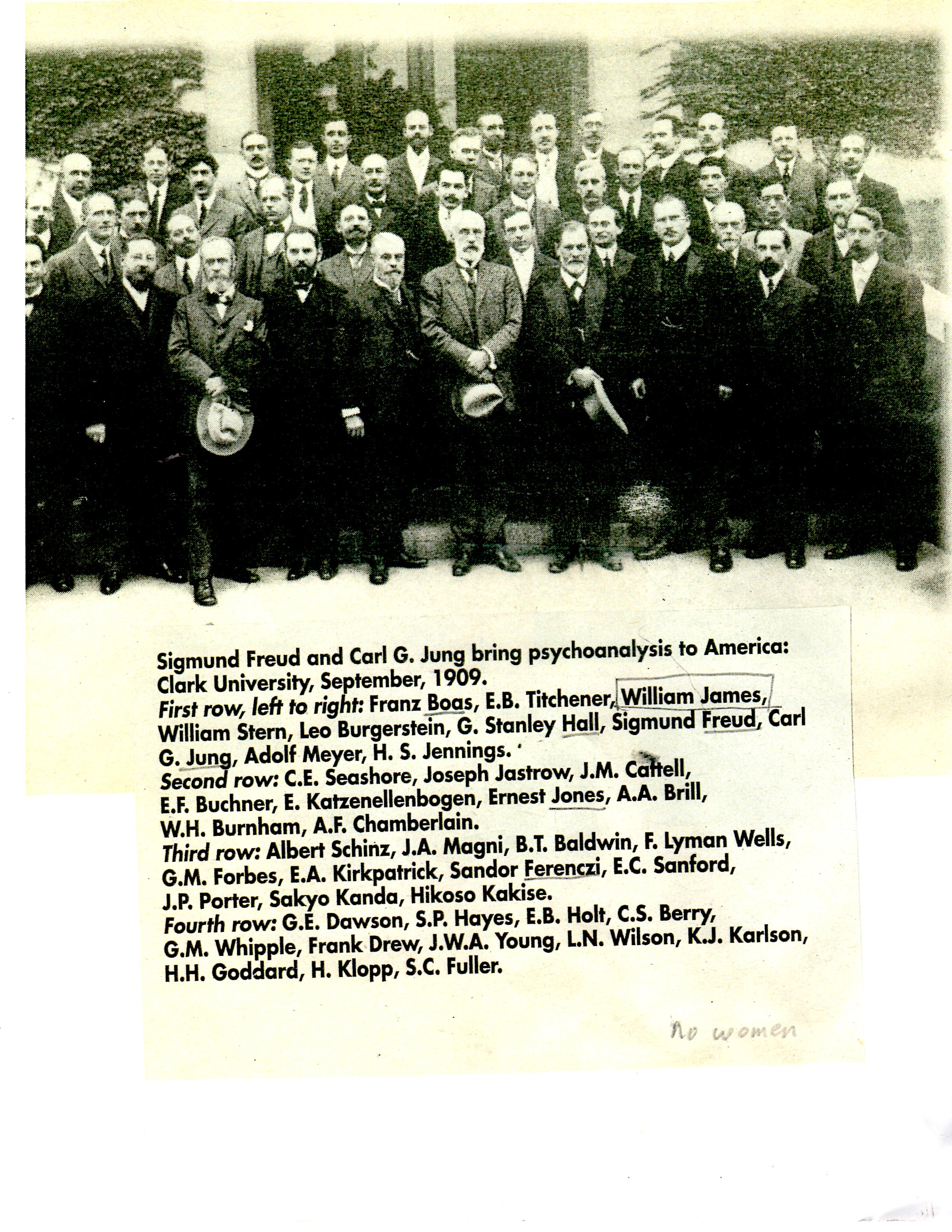 The mental health profession, not content with trying to solve real problems, has over the years proposed solving imaginary ones. The current debate is over the right to even try to cure homosexuality. The adage that there's no harm in trying doesn't hold. There is great harm in trying.

Let's cut to a century ago, when the problem was different but the answer was the same. We can see things better from a distance.

Above is a group portrait of the preeminent mental health professionals in the Western World in 1909. Freud himself is in the front row with Carl Jung just to his right. You can also see William James, the father of American psychology, and G. Stanley Hall., the great American psychologist who invited Freud to America to speak.

It was no small feat getting Freud to our shore. Freud despised the U.S. for being "too egalitarian" and having no strong leaders, and he came here only once. The picture was taken at Clark College, in Worcester, Mass., where Hall was a professor. If you are familiar with the names of some of these people, you are likely to look at them with curiosity and even a touch of reverence.

Maybe you're looking at this picture in another way, too, as I am. You've noticed that those in it are all men and almost all of them are white and middle-aged or older. A few women were invited to hear Freud, but none made it into the picture.

Observe, too, that some of these gentlemen have their hats over their penises, including Hall and Freud himself; others are protecting their genitals with their hands. I would like to explain why, much as Freud himself might have. It has to do with an early version of reparative therapy and its inevitable consequences--self- loathing and guilt.

Hall recommended that any adolescent boy avoid prolonged sitting or standing, never sit in a rock chair, and get up early in the morning. Parents were advised to buy pants for their teen-aged sons with pockets sewed far back to remove temptation. He had a lot more to say.

It would be easy to disparage Hall for trying to repair what isn't a problem. He certainly deserves demerits for taking folklore, including his own irrational fears and prejudices, and offering them as if they were science. Hall did considerable harm to people by instilling guilt and self-hatred when he had absolutely no data to back up his conclusions.

These eminent men were in some cases profound, but they were gutless. Not one of them, so far as I know, opposed Hall. Not one said "By the way, G. Stanley. I jerk off and I don't think I ruined my mind. How can you be so sure that my children will come out badly?"

I picture some of them saying to themselves, "I hate myself for what I am doing. Something is wrong with me. If I didn't jerk off, maybe I would have been Freud and everyone would have come here to listen to me. And look what I did to my children."

As a professional, I don't want to be like one of the sideliners. I know that no act is neutral. By whatever we do, we send messages and whole pictures to our own minds--about who we are and about who we ought to be. You can't try to change something without seeing it more as a deficit, as a disqualification. We all feel intrinsically that life has broken some promise to us--alienation is a fact of life--and when you try to repair homosexuality, at any age, you see it as the reason why you are alone.

In my opinion, every mental health profession has a scientific and ethical duty to oppose reparative therapy for homosexuality--to decry it and to mark it as an abuse.

This must be done because being in reparative therapy for homosexuality is never a neutral experience. It consumes more than time and money; it leaves a mark on the psyche that will take time and serious effort to erase. Our duty is to consider it not merely as an experiment but to oppose it in any way we can and with all the vigor we can muster. My own preference would be to outlaw it and to punish those who practice it because they ought to know better by now.

California banned conversion therapy for minors last year. New York and New Jersey are considering similar legislation. The sooner we end this destructive practice, the better. It is time to learn from past mistakes and to avoid expressing old brutality in a new form. Let's stop teaching minors to despise themselves by treating them for a natural variation on the human theme.

George Weinberg is a psychotherapist in New York City. He coined the term "homophobia" in the late 1960s and crusaded for its acceptance. He has written 12 books, including Society and the Healthy Homosexual, published in 1972. His next book is The Tools Psychology Didn't Give You