Consumers around the globe are helping fuel a booming illegal wildlife trade that's estimated to be valued at as much as $10 billion per year. In recent years, it's grown to the point that wildlife trafficking is now in the top five illicit activities worldwide - up there with counterfeiting and drugs. 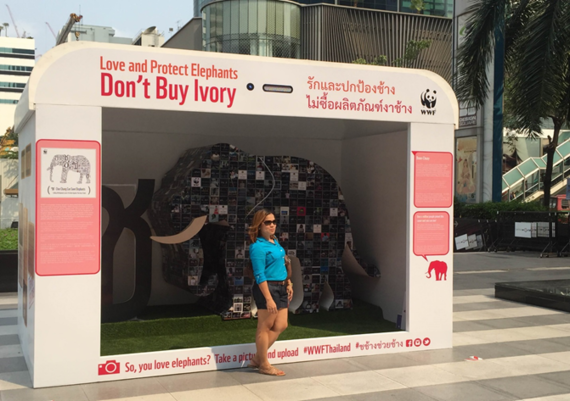 WWF's successful 'Chor Chang Campaign' elicited a significant response from the Thai public. The letter in the Thai alphabet called 'Chor' is the same first letter of the word for elephant, 'Chang'. The campaign asked people to remove the letter 'Chor' from their names to demonstrate what a life without elephants would be, and many responded via social media with their names missing that particular letter. Photo Credit: © WWF-Thailand

Whether naively or deliberately, global consumers are snapping up everything from high-end luxury goods to tourists' trinkets made from elephant ivory, illegally sourced reptile skin and endangered sea turtle shells.

Elephant ivory, for instance, is so coveted in some markets that it's driving a poaching crisis in Africa on an unprecedented scale. As many as 30,000 African elephants are killed every year to supply the illegal ivory market globally, including in the United States.

Fortunately, there is hope. If consumer desire for products like ivory can be changed - and the multibillion-dollar advertising and marketing industry would not exist if consumers couldn't be influenced - then the black market driving elephant poaching dries up. And key governments alarmed at the growth of this wildlife crime have recently made public policy changes that open up important opportunities to change consumer buying.

In one of the biggest wins for elephants, the presidents of China and the United States agreed last year to enact near-total bans on ivory sales in each country. This was an enormous step by two of the world's biggest consumer markets for wildlife products. And other international leaders soon followed suit. Officials from Hong Kong and Singapore joined the global roster of ivory markets committed to ending their domestic trade. Shutting down the legal supply in this way will immediately end some consumer purchasing; to address the rest, it's critical that efforts to influence lingering consumption are ramped up.

The conservation community, including WWF and our partners, as well as funders and governments, are increasing investments in consumer "demand reduction" efforts to do just that. This work is an essential complement to our anti-poaching and anti-trafficking programs. By combining consumer outreach with public policy advocacy, these initiatives are engaging both the general public and targeted consumer groups (from fashion-conscious middle-class buyers in Thailand to high-end investors in China) through increasingly sophisticated approaches to educate and change consumer behavior. A workshop at the IUCN World Conservation Congress on Sept. 4 will explore some of the new approaches being used by conservation organizations to reduce consumers' desire for illegal and unsustainable wildlife products.

Demand reduction is one of the most innovative, creative areas of conservation at the moment. It taps into new-to-this-space psychosocial approaches, adopting commercial marketing techniques and working with consumer research firms to identify attitudes and motivations of buyers. WWF and other groups are deploying digital outreach and advocacy, connecting with consumers at key points like airports and tourist markets, and recruiting influencers from an array of spectrums, from respected business leaders in China to revered Buddhist monks in Thailand.

In Thailand, which until last year had the world's largest unregulated ivory market, WWF combined public policy advocacy - pushing for strengthened laws and enforcement - with public outreach. We launched a campaign that tapped into Thai people's affinity for their national animal to show what a world without elephants would look like. It kicked off a public dialogue for the first time in that country about the connection between buying ivory and poached elephants. At the same time, we worked to amend national legislation to address black market ivory sales. While Thailand still has a way to go - ivory sales are still allowed, unfortunately - its market is no longer completely unfettered.

Today's wildlife trafficking crisis is fueled by consumer choices. The solution can be too.