I have been anxiously awaiting an alternative to conventional electric power and the economic benefits that follow. Of course solar comes to mind, and while I love solar power, it can be expensive and because of the space requirements for panel installation, it is not for everybody.

My prayers were finally answered, as ClearEdge Power of Portland, OR, has rolled out the first home fuel cell. Initially available only in California, the ClearEdge5 self-contained fuel cell was actually announced last year but that was somewhat of a well-kept secret. The availability of this product marks the first time in America that fuel cell technology has become available to individual consumers. The ClearEdge5 can create energy that can power, heat and cool your home, and swimming pool, without using electric power from the utility company. You'll reduce the power you pull from the grid while using natural gas - the cheapest power source available at least for now. 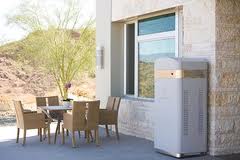 "After significant private equity investment and seven years of research by our 50+ R & D team, ClearEdge Power is proud to be the first to offer this groundbreaking technology to California's homeowners," said Russell Ford, CEO of ClearEdge Power. "This is a major development in America's push to become energy independent. We hope to roll this product out to other states, beginning with New York in the early part of 2011. But California is the first, and homeowners can receive federal and local incentives up to $17,500 by installing a ClearEdge5 kilowatt fuel cell."

A fuel cell is an electrochemical device which converts a source fuel into electrical current. The electricity generated inside the cell is a reaction between the fuel and an oxidant. Fuel cells can operate indefinitely, so long as the necessary reactants and oxidants are replenished. A hydrogen fuel cell uses hydrogen as its fuel and oxygen as an oxidant. Fuel cells can also use hydrocarbons or alcohol as fuel and chlorine or chlorine dioxide as oxidants.

Unlike petroleum-based fossil fuels, fuel cells are a clean energy source creating virtually no toxins or pollutants. The main byproducts are water, heat, and carbon dioxide. The CO2 emissions are substantially less than those produced by conventional power systems.

I contacted a real-world customer of ClearEdge Power to find out more about how the home fuel cell actually works. Gary Dillabough, of Atherton, CA, is a green industry professional who wanted to find an energy alternative with a smaller footprint than solar panels. "The payback is just over three years," Dillabough explained. "I think several of my friends will also adopt this technology after seeing how well it works." Admittedly, Dillabough is a sophisticated investor and early adopter of advanced technology, and the ClearEdge5 penciled nicely for his larger home. As should be the case for a pioneer, he is among the first people in the country, if not the world, to try a home fuel cell. But hopefully his favorable experience is a precursor to much more volume, and lower prices as the technology progresses. 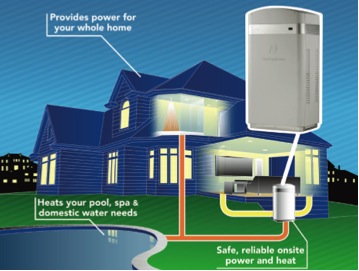 You may have heard of the other significant fuel cell provider, Bloom Energy. Unlike ClearEdge Power, Bloom has received tons of publicity. While Bloom focuses on commercial applications - their initial deliveries to corporate headquarters buildings for Google, E-Bay and FedEx among others, attracted lots of attention - I think ClearEdge Power can potentially be even a bigger player in this space because of its suitability for single family homes and small commercial applications. The hype surrounding Bloom has yet to be proven, as the cost to install and run those commercial applications still exceeds the savings by a significant margin. (I should disclose here that I personally have a small investment in Bloom Energy).

Billions of dollars have been invested in alternative and renewable energy technologies. Bloom is rumored to have spent over $450 million to date, and its product is still in the developmental stages. ClearEdge Power is a true pioneer in America's vision to create energy independence. You can now power your home while reducing your energy bills by as much as 50% and reducing your carbon footprint by as much as 40%.

I should note that initially, the ClearEdge5 makes most sense for homes with a larger footprint and power needs, but as the technology is further developed and power costs continue to rise, future CEP models will become accessible to homeowners with smaller homes. We urge you to visit the Sierra Club Green Home website to learn more about this stunning new technology.