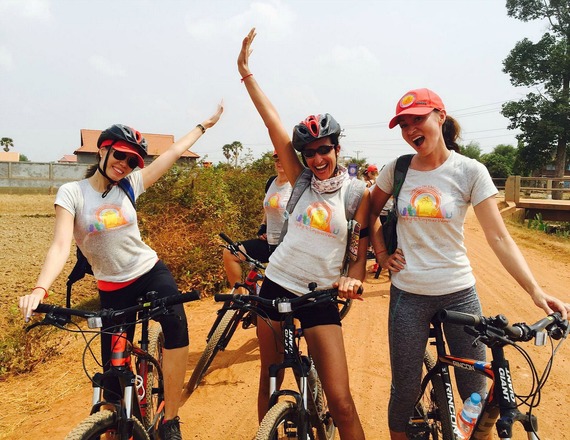 The young woman sat on the edge of the wooden porch of her house in Mechrey, a floating village on the northern reaches of the Tonle Sap, west of Siem Reap. She stared dreamily at the riverbank, as her feet splashed gently in the murky waters below. This was the house of her parents, the house she, Ratha, was born in. Her father had been a fisherman for as long as she could remember, and her mother, despite her poor health, tended the house and took care of the six younger siblings.

Ratha felt happy to be home for a few days to see her family and had that warm fuzzy feeling inside her. Soon she would be heading back to work at the luxurious and glitzy five-star hotel in central Siem Reap, wearing her elegant silk uniform and welcoming international guests from all over the world. As she thought about her life and how lucky she was, a bright smile lit up her face. "I'll never forget the day father agreed to let me go to study at Sala Baï... Mama was so sad to see me go, but both Papa and her knew in their hearts such an opportunity was rare. It was a dream come true for our family," she reminisced. 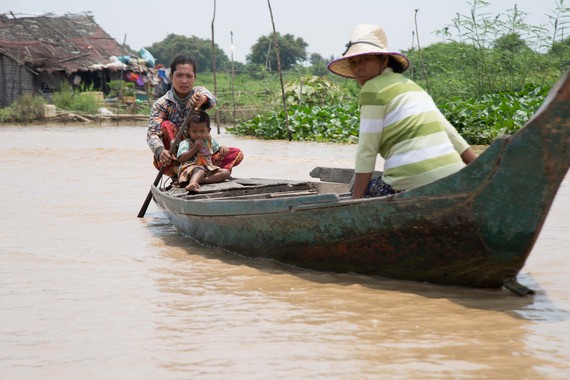 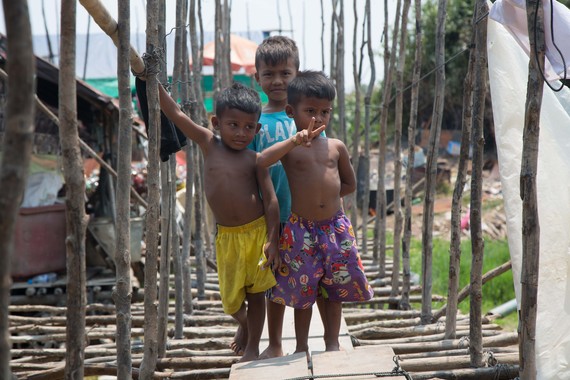 Ratha was just one of the students that our Women On A Mission (WOAM) biking team met on our tour of Cambodia. She was one of the lucky students to graduate from Sala Baï -- a hotel and restaurant school that was launched in 2002 by the French NGO 'Agir pour le Cambodge'. Since its launch, the school has seen more than 1,300 students graduate and each student has been employed within four weeks of graduation. During their free 11-month course, the students study English, French, labour laws and technical skills for their chosen speciality. Students can take up catering, tourism, front of house and the school has just launched beauty therapy. With their new skill set, each student is then able to earn around three or four times their average household monthly income, which means the lives of these young adults and their families are changed forever.

Ratha is now able to help pay for her little siblings to go to school as well as buy her mother's precious medicine. Like Ratha's journey, the stories of other Sala Baï students are heart-warming and often heart wrenching. They remind us that education can change lives and give young people from underprivileged backgrounds a brighter future. In a country like Cambodia where primary school dropout rate is close to 40 per cent, Sala Baï is impacting the local community and making a difference. 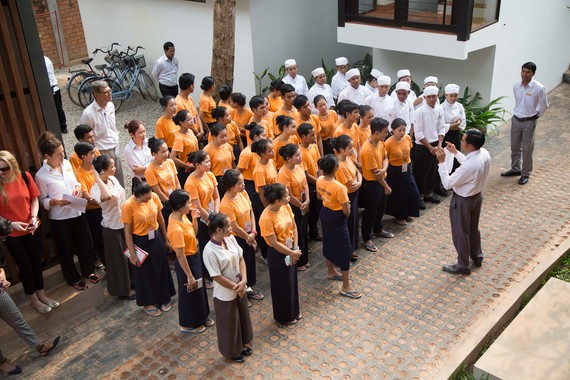 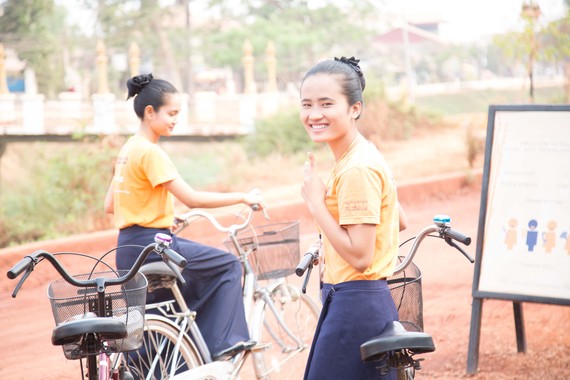 While the future for the students of Sala Baï is bright, the future of these school dropouts isn't always as rosy because Cambodia is a hunting ground for human traffickers. The traffickers are reportedly organised crime syndicates, parents, relatives, friends, intimate partners and neighbours. Children are trafficked for sexual exploitation and forced into organised begging rings or factories. A UNICEF survey found that 35 per cent of Cambodia's 15,000 prostitutes are children under the age of 16.

WOAM, the non-profit organisation my partners and I co-founded in 2012, has for objective to champion the cause of underprivileged and abused women and girls and shine more light on the tireless work that organisations like Sala Baï do to empower women and stop human trafficking in its tracks. So 14 members decided to head to the Cambodian city of Siem Reap to see what we could do to help. 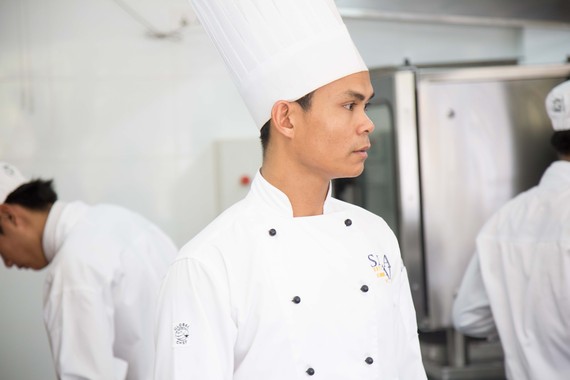 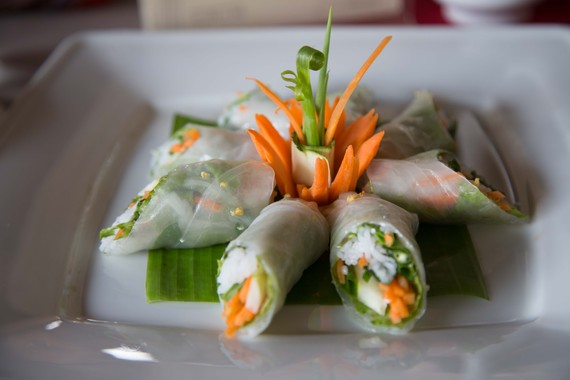 During our trip there in March 2016, the WOAM team visited Sala Baï during its annual alumni festival and met the students, graduates, teachers and managers. We were able to conduct interactive leadership development workshops at the school to share best practices from the hospitality industry in Singapore and in the region.

We also took an arduous 55km bike ride, in blistering heat, in and around Siem Reap's Unesco World Heritage sites and fell in love with the country's magnificent temples of Angkor, built by the Khmer Empire at the apogee of its power.

Our journey then led us out to the floating village of Mechrey, where many of Sala Baï's students grew up. It was our chance to see first-hand how this innovative project is changing communities. It was also there that we met Ratha and she was able to show us just how valuable the work of this NGO has been to her village. 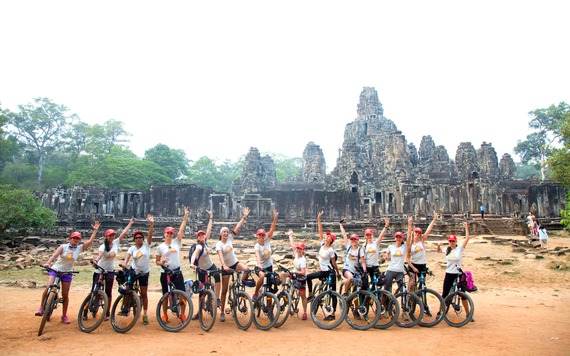 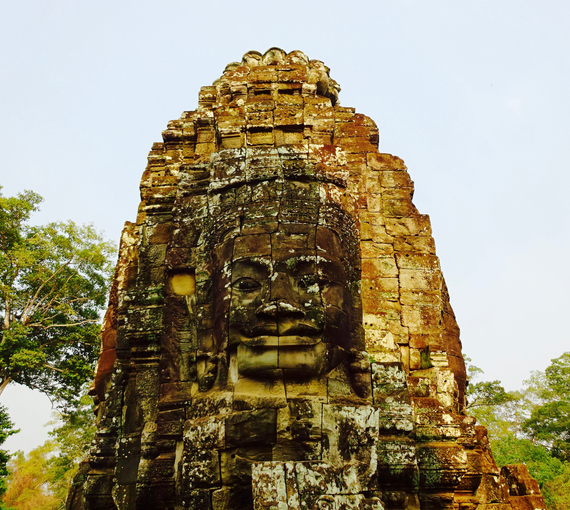 Cambodian history is fascinating even if marred by terrible violence and bloodshed. But it was when King Sihanouk was overthrown in 1970 and Cambodia was renamed the Khmer Republic that Cambodia entered its darkest period...
The Khmer Rouge killed nearly 1.5 million Cambodians and maybe as many as 3 million from 1975 to 1979, spreading like a virus from the jungles until they controlled the entire country, only to systematically dismantle and destroy it in the name of a Communist agrarian ideals.

Today, more than 35 years after Vietnamese soldiers removed the Khmer Rouge from power, the genocide trials still continue -- a bittersweet note of progress in an impoverished nation still struggling to rehabilitate its crippled economic and human resources. As we cycled through the countryside, we saw the scars from its war years, including the Killing Fields, where the Khmer Rouge had slaughtered millions of Cambodians.

However, despite the fact that Cambodia has faced such horrors and is still a poor country, there is every reason to be optimistic about its future. In the early years of the 21st Century, the Cambodian economy grew rapidly. As of today, the textile industry is booming and so is tourism, and in 2005 oil was discovered in the sea off Cambodia. But if you still had any concerns about the future of the country, the Sala Baï scheme would help placate them instantly. No longer do the young women of Cambodia see only one way out. Education has been proven to be one of the most efficient means to stop human trafficking before it starts. As they say, if you educate a woman you educate a nation... or in this case, save a community. 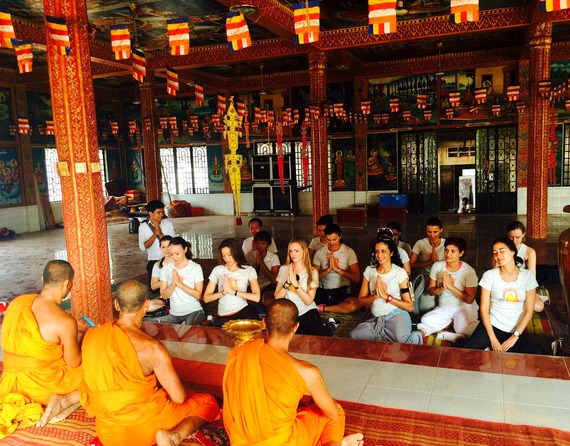 Women On A Mission (WOAM) is an non-profit organisation headquartered in Singapore, which combines challenging self-funded expeditionary travel to remote locations around the world, with the support of humanitarian causes.
This Cambodia bike trip had for objective to raise awareness and funds for Sala Baï, a Hotel and Restaurant training school in Siem Reap that is moving mountains to stop human trafficking in its tracks.
To make a donation to Sala Baï please click here.
Photo Credit: WOAM

Watch the highlights of the trip - film created and produced by WOAM teammate Savana Peetoom: