The Charles Bridge... a mansion designed by Mies van der Rohe... an ancient Jewish town center and synagogue. What do these and nine other equally diverse places have in common? They've all been designated UNESCO World Heritage sites in the Czech Republic.

When a site receives the highly prestigious UNESCO World Heritage status, it's rather like announcing that this is something exceptional and unique and will be protected for all the nations of the world. Here can be found a dozen such sites, all within easy reach of the capital with travel times ranging from 30 minutes to 3 hours by car. Czech has more than twice the world's average sites which makes this destination a kind of UNESCO super power. In fact, in all of Eastern Europe, only one country has more: Poland has 13 and it is two and a half times larger than the Czech Republic.

High Tides, Good Tidings
I visited seven of the twelve Czech sites recently, each one unique, each inspiring and worthy of its honored distinction. We began our tour in Prague where the whole of the city's center is recognized by UNESCO. A lucky city, this, because during two world wars and unlike many other European cities, Prague was spared devastating destruction. Thus, a large variety of historical buildings in architectural styles ranging from Gothic to Rococo and Art Nouveau are still standing. However, today one might also think "unlucky city" because of major flooding the city has undergone recently. Not so. Katerina Pavlitova, Director at the Prague Information Service, informs me that as of this date, all of the Prague tourist sites have been reopened and there is no significant damage to the city and none to the historical center.

This Castle Rocks!
Although suffering jet lag (we'd only just arrived a few hours before), we were off on a walking tour of Prague Castle. Out of the 4,500 castles here, it is the most popular for tourists; it is also a site entered into the Guinness Book of Records as the largest castle in the world. Since 870 it has been the residence of sovereigns and is now the home of the current president. 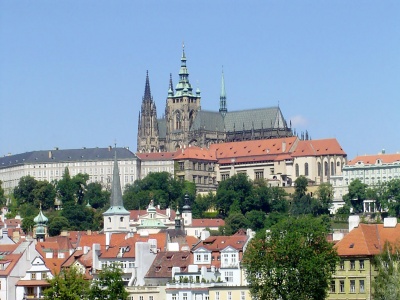 Impossible to see all in one day, yet with limited time we were dazzled by the Castle's picture gallery with works by Rubens, Titian, and a new collection dating from the mid-17th century with significant works by Italian, German, Flemish and other masters.

On the Castle grounds is the St. Vitas Cathedral, dating from 1344 and taking 600 years to complete. The late afternoon sun shone through the imaginative rose stained glass window, making misty rainbow colors bounce about the church's nave and coloring its stately columns in shades of pink, mauve and lavender - an experience memorable and very mystical, to be sure.

His Lips Were Sealed
We returned to our hotel via the Charles Bridge, the oldest in the city and founded by Charles IV in 1357. It is a glorious and majestic passage that beckons one to linger. In fact, the very reason to enter the bridge is less to cross the Vltava River than to experience the magnificent views from it and to gaze upon the thirty sculptures of saints. Everyone's favorite is that of St. John Nepomuk, a priest in Prague under King Wenceslas IV. The story goes that the Queen made her confession to John. The King, being a very suspicious man, pressed the priest to reveal the Queen's confession which he refused to do. John of Nepomuk was thus executed by being thrown from the bridge into the river and drowned. The bronze plaque on his statue shows a knight and his dog. It is said that if you rub the dog, you'll have good luck and a return visit to Prague is insured. Happily St. John is standing firm as ever, and I'd strongly recommend that you take a moment to rub away. You will have to return, if only to cover all the sites that one cannot possibly accomplish in just one visit. 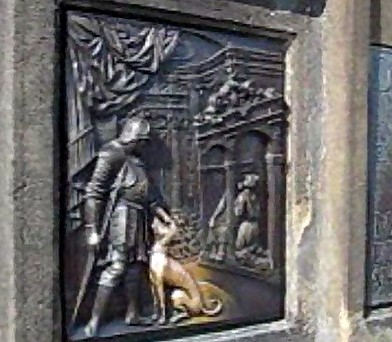 Let the Adventure Begin!
Bright and early the next morning we boarded a van for the 100 mile journey to the city of Telc (pronounced Telch). The trip through the Czech countryside was bucolic, skies a cerulean blue with wide swaths of intense green farmland, red-roofed homes and dense pine forests; fields sprinkled with Queen Ann's Lace, yellow Rape, and pink wildflowers. Telc is a town in southern Moravia, founded in the 13th century. The highlight here is the monumental 17th century Renaissance chateau with an English-style park. Telc's town square is a long plaza ringed by wonderfully- preserved Renaissance and Baroque 16th century houses in pastel shades of cream, pink, turquoise and salmon, with fanciful high gables and arcades. The town has been a UNESCO World Heritage site since 1992 and I challenge anyone gazing upon these fairytale-like dwellings to leave here without a smile.

The Jewish Quarter
On to Trebic (pronounced Trebich), another Moravian town with its well-known Jewish Quarter and St. Procopius Basilica, both World Heritage sites. The Romanesque Basilica originated in the early 12th century as a Benedictine monastery. Sitting in a cool, quiet pew in the back of the church, I gazed at its rare, ten-part rose window featuring rose petals, flowers and fruit, designed to represent the wheel of life. Trebic's synagogue is known as the Rear Synagogue. Built in 1737, over the years it fell into a deplorable condition and from 1920 it was no longer used for religious services. Fortunately, by the end of the 1980s, reconstruction of the synagogue began and was finally completed several years later. Since there is no longer a Jewish community in this city, the building is now used for meetings, exhibitions and concerts.

In 1996, the South Moravian village of Lednice has been included in the World Heritage list, calling it

an exceptional example of the designed landscape that evolved in the Enlightenment...

Here is found the country's largest park, as well as a 17th century Renaissance palace. It is a grand mansion and precisely what a castle should be like: luxury on steroids. One of my favorite sights: a winding staircase, all lacy, filigree-work in wooden artistry - the kind of work never to be repeated today.

See No Evil
Another day we visited the city of Brno (pronounced BRno). It is the largest city in the Republic after Prague, and the cultural center of the South Moravian Region. It has a thousand-year-old history and because it's a university town, most of its inhabitants speak English. The best part of my visit here was a tour of the UNESCO site VillaTugendhat, the most important European work of the architect Ludwig Mies van der Rohe, added to the World Heritage list in 2001. Built in 1929-30 for the Tugendhat family, upon seeing it one immediately thinks of the homes designed by Frank Lloyd Wright. Like his dwellings, this mansion snuggles into the hilltop and has commanding views from its many terraces. Cozy yet elegant, it is a charming home that, sadly, the family was forced to abandon in 1938 when soldiers of the Third Reich moved in. When I learned that the Tugendhats were Jews, I asked a guide what were the feelings of the average Czech when Hitler came on the scene.

I was told. And when Jews had to flee the country?

Our last two UNESCO sites were the villages of Zelena Hora and Kutna Hora. The former houses the church of Saint John Nepomuk, the Czech martyr. Architect Giovanni B.Santini used the symbol of the pentagram for the building in the Baroque/Gothic style with an altar depicting the martyr carried by angels to heaven. A quirky, distinctive structure, it is well worth a visit.

Kutna Hora is home to the Cathedral of St. Barbara. The unique shape of its magnificent soaring spires is a product of the late 15th to early 16th century. As St. Barbara is the patron saint of miners, many of the interior adornments reflect mining life and the ceiling murals include depictions of the miners'guild coat of arms.

When planning your Czech Republic visit, check out Miroslav Prokes
tourguides.viator.com › Find a Tour Guide › Czech Republic › Prague
A most capable guide, the man is fluent in English, German, Russian and Swedish and on his tours, he'll regale you with historical, (sometimes hysterical) stories as well as provide transportation to cities of interest; he'll also personalize the tour to your individual taste and needs.

Before I left the country, yes I did - I had to return to the Charles Bridge and St. John's statue. How could I depart this remarkable destination without the requisite rub to insure my return? After all, waiting in the wings are no less than sixteen more Czech sites on the Heritage list looking forward to UNESCO inscription. Chances are, on my next visit I'll have many more impressive sights to discover!