Late Sunday evening, both "The Daily Show" and "The Colbert Report" official Twitter accounts were hacked. It started with tweets telling people to follow a private Twitter account along with a link to this externally-hosted photo and the message, "Watch your security, bro <3." The tweets also included hashtag shout-outs to Anonymous, who have been very active since last week's Megaupload takedown, and Stop ACTA! a group in protest of the international anti-counterfeiting trade agreement.

Within minutes, requests to, "Ignore [their] last several tweets," went out, and it became clear that the tweets had been posted by someone without authorization. Other Viacom accounts, including @ComedyCentral and @Spike_TV were reportedly also compromised in the process, via Hoot Suite, which is where all of the unauthorized tweets originated (official tweets appeared to be posted via web).

As of Monday morning, the private Twitter account in question is suspended, and all traces of the tweets have been deleted from "The Daily Show" account. "The Colbert Report" has left up the hackers' tweet announcing that they're Anonymous supporters, but not affiliated, and what appears to be a final apology tweet reading simply, "#pleasedontbemean #girlsjustwannahavefun."

There's no word yet as to whether or not the offenders have been identified or if Viacom would be looking to press charges, but one thing seems certain: we're in for some jokes about it from Stewart and Colbert tonight. 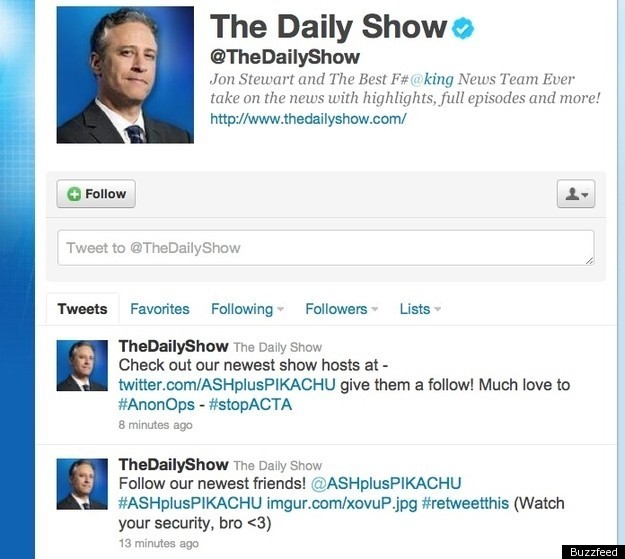 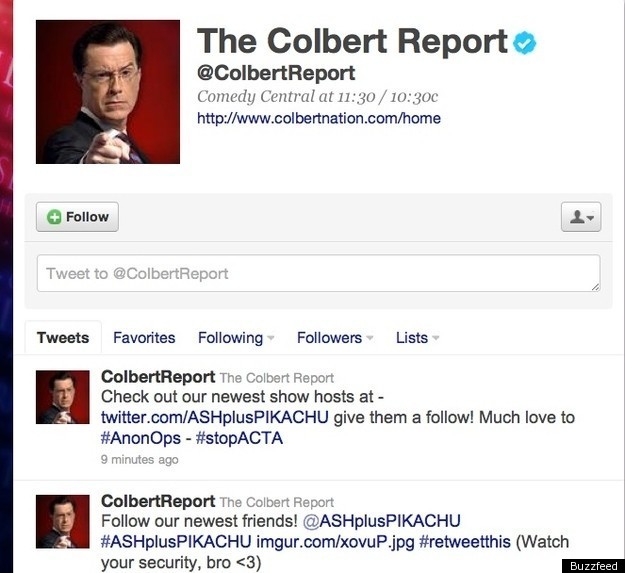