In February and March this year we witnessed the bizarre spectacle of groups of Western Buddhists in San Francisco and Washington, D.C., screaming at the Dalai Lama, accusing him of "religious persecution" and "abuse of basic human rights." The Dalai Lama, one of the most respected and trusted global figures and a recipient of the Nobel Peace Prize who has made interfaith dialogue and understanding a fundamental aspect of his life's mission! What on Earth, one may ask, is going on?

Italian journalist Raimondo Bultrini attempts to unravel this mystery in his new book, The Dalai Lama and the King Demon: Tracking a Triple Murder Mystery Through the Mists of Time (Hay House, 2013). Bultrini chronicles a controversy that has carved a jagged and painful path through Tibetan Buddhist society. In its passage, a serious threat to the Dalai Lama's authority, an unforgiving and occasionally violent divide between his people, a smear on the reputation of Buddhism itself, and a heaven-sent scenario for China's state actors to sow discord and distrust and win allies among the Tibetan people.

The extreme edge of this damage was the savage murder in 1997 of a senior monk, Geshe Lobsang Gyatso, and two junior monks. The attack, which sent shockwaves through the Tibetan exile community, took place in a monastery adjacent to the Dalai Lama's compound in Dharamsala, India. Gyatso, who had been an outspoken critic of the practice of a particular entity in the Tibetan Buddhist pantheon called Dorje Shugden, was stabbed 17 times and his throat slit. The subsequent police investigation implicated two Shugden followers. Arrest warrants were issued by Interpol, but the suspects were believed to have fled to Nepal and then to China. Although their guilt was never determined in a court of law, the majority of the Tibetan diaspora remain convinced that Shugdenites were to blame. An ancient spiritual feud had entered contemporary lethality. 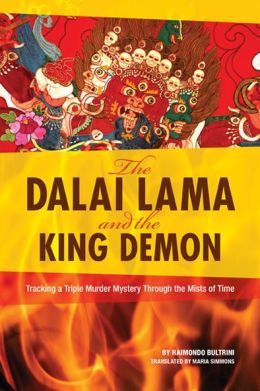 As early as the mid-'70s, the Dalai Lama began advising against the practice of Dorje Shugden, whom he calls Dogyal, or "demon king," explaining that it encourages discord and division between the different Tibetan Buddhist schools. Indeed, Shugden devotees represent an ultraconservative (some would say fundamentalist) branch of Tibetan Buddhism that seeks to maintain what they regard as a more authentic lineage. The Dalai Lama's later comments describing Shugden as "a spirit of the dark forces" and prohibiting followers from attending his teachings had a ripple effect within the diaspora. Though he never directly forbade the practice, the Dalai Lama's statements resulted in a de facto ban that was self-enforced by the majority of Tibetan exiles.

Shugden practitioners gradually became social pariahs. Shopkeepers refused to sell to them, and landlords refused to rent to them. In 2008 the Tibetan leadership ordered the monasteries in South India to purge their populations of Shugden devotees. Monks who had formerly lived like brothers were now forbidden to talk to one another. The more zealous engaged in violent scuffles and beatings. Hundreds of monks were expelled, and those who remained were required to publicly denounce the practice under the eyes of the abbots, eager to prove their loyalties. For their part, Shugden representatives began comparing the Dalai Lama and the Tibetan government's handling of the issue to the Nazis and cosying up to China.

The Dalai Lama and the King Demon veers from a semi-fictionalized account of the investigation of the murders by Indian police ("[W]hat kind of religion is this that unleashes a massacre of monks, butchered because of some invisible spirit?") into a first-person narrative of Bultrini's forays into Tibetan Buddhism and meanders into a chronicle of the controversy's obscure religious history. These different approaches to the story have their own merit, but the result makes for rather unwieldy and choppy reading.

There are a number of interesting dialogues with leading Shugden personalities such as Ganchen Tulku and Kundeling Rinpoche. Significantly absent, however, is the highly influential Geshe Kelsang Gyatso, who heads the New Kadampa Tradition that runs over 500 centers around the world. We never get to hear the personal perspective of ordinary Tibetan Shugden practitioners, either lay or monastic, whom Bultrini characterizes as "pawns" in the dispute.

Another omission is any substantial analysis of the Western Shugden Buddhists, who curiously have emerged as a well-funded and vocal lobby in what previously was a purely Tibetan domain. The Shugden Supporters Community, the Freedom Foundation, and, more recently, the International Shugden Community (ISC) are all fronts for the New Kadampa Tradition (NKT), who make the highly implausible claim of 4 million Shugden followers worldwide. Bultrini's inquiry would have benefited from an interview with American ISC spokesperson Rebecca Gauthier, for example, who, in between posts about "stress-busting" salad dressings, tweets things like "10 SIMPLE reasons why Dorje Shugden is a Buddha and NOT a spirit" and "The Dalai Lama is NOT REAL: find out why here."

This arcane religious dispute revolves largely around two of the four schools of Tibetan Buddhism: Nyingma and Gelug (the latter being the most dominant school, to which the Dalai Lama belongs). The historical origins reach back to the 17th century, when a rival of the fifth Dalai Lama, Drakpa Gyaltsen, died under mysterious circumstances and was later reincarnated as a fierce guardian of Gelugpa orthadoxy. In fact, as Bultrini points out, the Shugden issue has always involved tensions between staunch traditionalists and more liberal elements of Tibetan society and seems to raise its head whenever a Dalai Lama pursues a policy of modernization and religious inclusiveness. The present 14th Dalai Lama, as well as the 13th and fifth before him, all eschewed sectarianism and chose to receive some of their instruction from Nyingma masters. The Shugden ghost has haunted them all.

The agonizing choice that ordinary Shugden followers feel forced to make between loyalty to their beloved leader and their sacred vows to the teachers from whom they received the practice is difficult to fathom by those unfamiliar with the enormously important role that the guru plays in Tibetan Buddhism. These days, even among the educated, Shugden has taken on a Voldermort-like persona, and many Tibetans are scared to even utter the word "Shugden" out loud. Rumors abound about Gelug followers who practice Nyingma teachings having their lives cut short or meeting with sudden misfortune.

The attacks on the Dalai Lama by the Shugdenites, particularly by Westerners, are cultish, paranoid and extreme. While accusing him of religious discrimination, they themselves maintain a far less ecumenical approach by pressuring their own followers to not engage in Nyingma practices. But the Tibetan government's response has been less than skillful, with incendiary speeches that have been easily interpreted as encouraging violence. Most recently, the Central Tibetan Administration has made public a "blacklist" of Tibetan Shugdenites. Dorje Shugden is either a malevolent spirit or an enlightened being, depending upon whom you ask (and the book title is revealing of the author's own bias), but the "Shugden effect" in terms of both Tibetan society and the Tibetan cause appears to consist solely of damage. None of it seems particularly Buddhist.

Chinese authorities in Tibet have been quick to take advantage of the situation, knocking down statues sacred to followers of the Nyingma and erecting statues of Dorje Shugden. The Chinese-appointed Panchen Lama (as opposed to the one acknowledged by the Dalai Lama and the majority of Tibetans) finds support among key Shugden leaders, and Bultrini asserts that a number of Shugden projects are funded directly from Beijing.

It may all sound deeply superstitious and chimeric to outsiders, but the implications of the Shugden affair are eminently tangible in a society where light struggles to shine between politics and religion. The very language required to discuss it sounds more or less preposterous to those who are unfamiliar with the psycho-symbology of Tibetan Buddhism, and this is exactly why it is so difficult for the Dalai Lama to respond to his detractors in a way that is coherent to Western ears.

Although many in the Tibetan establishment express their preference to "let sleeping dogs lie," it is clear that this particular dog is not only awake but becoming increasingly active. Bultrini's book is a timely and well-researched contribution to the debate. His obvious devotion to the Dalai Lama and his immersion in Tibetan Buddhism could be viewed as a hindrance to his objectivity, although it is hard to imagine anyone not personally invested in the Tibetan Buddhist world having the patience or persistence to produce an entire book on such an abstruse topic. The audience will, necessarily, be small but attentive.

Perhaps Bultrini's greatest accomplishment is in paving the way for more candid and less polarized discussion on an issue that is slowly but consistently gnawing at the very heart of the Tibetan Buddhist world. For those who may choose to engage, it is worth recalling the Dalai Lama's advice to Bultrini: "Don't be frightened of spirits, but be wary of men with knives."