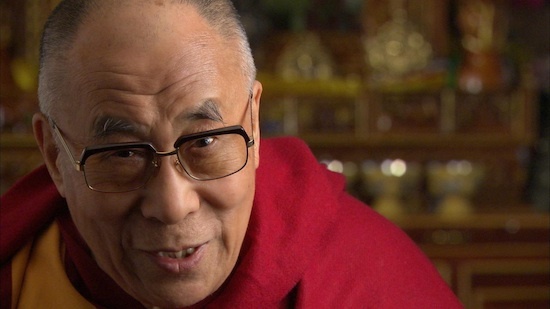 More and more artists, filmmakers and storytellers are turning to crowdfunding campaigns to build communities, find support, and raise funds and awareness. Very special projects find platforms like Kickstarter and Indiegogo and use them to extend a narrative, to crowdsource a dialogue, and to build a new audience in a highly passionate and participatory atmosphere. This kind of crowdfunding was referred to in The New York Times recently as "the people's NEA."

This month I'd like to focus on the timely and extraordinarily important Kickstarter campaign for filmmaker Mickey Lemle's The Dalai Lama Film, raising funds on Kickstarter until August 10th. Click here to visit the film's page and to become a part of the growing community of people supporting the campaign for the movie that His Holiness the Dalai Lama has indicated will be a part of his "Spiritual Will."

Award-winning filmmaker Mickey Lemle has directed several seminal documentaries, among them: Ram Dass Fierce Grace, The Other Side of the Moon, and Compassion in Exile: The Story of the 14th Dalai Lama. The latter film introduced millions of people all over the world to the Dalai Lama 23 years ago. 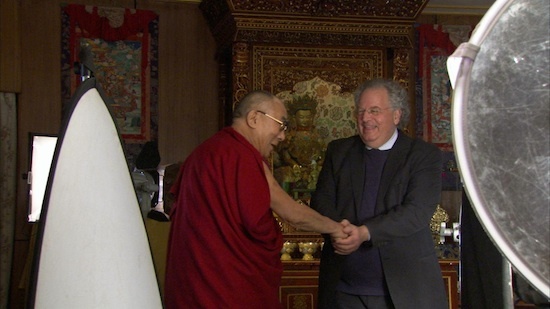 Lemle's new film, The Dalai Lama Film, will coincide with the Dalai Lama's 80th birthday in July 2015 and the celebrations planned for Tibetan Buddhist communities worldwide to commemorate this milestone. The film will also reveal information about the Dalai Lama's next incarnation.

I asked Mr. Lemle a few questions about his 30-year relationship with His Holiness the Dalai Lama, his Kickstarter experience thus far, and his upcoming documentary, The Dalai Lama Film:

SS: What is this project about and why are you making it now? How does it differ from your previous film about the Dalai Lama?

ML: The first movie that I did, Compassion in Exile, was really the first major movie that was made about His Holiness the Dalai Lama. In a way it introduced his story and him and what was going on in Tibet to millions of people around the world as well as introducing them to some of the tenets of Buddhism and also to the Dalai Lama's great wisdom and humor and compassion. And I thought at the time that if the world knew what was going on in Tibet that might have an effect and it might cause some change in the situation. And it's now 23 years later and not only has it not gotten better, but it's actually gotten worse in Tibet to the extent that 131 Tibetans -- mostly young people -- have immolated themselves because of their frustration with what's going on with the Chinese occupation and the lack of world response to it. I grew up during the Vietnam War and I remember vividly there were three Buddhist monks who immolated themselves in Saigon and this directed the world's attention to the predicament. And now you have 131 people who have died and I don't remember the last time one was in an American paper. It's being totally disregarded. So I thought maybe it was time to make a movie and bring some attention to what's going on.

SS: Why are you using Kickstarter to raise money for this project?

ML: Well, uh, I need the money. That's number one. It's my first Kickstarter campaign and it seems to be a viable way of getting support for a project like this. I believe Kickstarter and Indiegogo processed more money last year than the National Endowment for the Arts. It's the new way to get things funded, although it's a lot of work. But aside from just raising money, it's very interesting because 465 people at this point have made contributions and it's really created a community around the movie. People now care about it and they're invested in it, both literally and emotionally. The whole process these days is about promotion. There are so many demands on people's attention, so how do you get them to hear your story? We've now created a community around it and it's so gratifying when I send out a blast and ask them to share this with their friends and to have all of these strangers respond, thanking me for doing the project. Even while I was sleeping, I'd wake up and people had sent me money. It's this whole community of people who care about the things that I care about.

His Holiness the Dalai Lama is about to turn 80 next year and I do feel like this film is a part of his legacy. He even says in one of the interviews that for the future when people want to know who the 14th Dalai Lama was, they're going to look to my movies.

SS: HH the Dalai Lama has said that your upcoming documentary The Dalai Lama Film is part of his "Spiritual Will." Can you elaborate?

ML: The first question I asked his Holiness is if he had a Spiritual Will, and he said no. You see in the trailer for the film that the movies and the recordings of his actions and his thoughts are really what he's counting on to be his Spiritual Will. And so then I asked him "is this movie that we're making now together a part of your Spiritual Will?" and he said "yes, it is." And that made me feel like this is quite a responsibility.

SS: As someone who has known the Dalai Lama for 30 years, what would you most want people to know about him? Is there something about the Dalai Lama that we may not know?

ML: Well, every time I'm with him, he just cracks me up. He's so funny and he always surprises me. Every time I'm with him he says something that's a total surprise. It's always incredibly insightful; it's deeply wise and very funny. He's got one of the most evolved minds on the planet. He's this great beacon of light in the midst of incredible darkness, a luminary in the best sense of the word. If we see how he's dealing with the issues that he has to deal with then perhaps it becomes possible for each of us to transform our own negativity and negative thinking and to have a more tranquil and compassionate mind. That's also in his message: to have a good life, you really need to have a tranquil mind. He and the Tibetan Buddhists have figured out the technologies for doing this. And he's the living example. He's the metaphor that we can all look to and say: "well, maybe I can do this." It's because he's so human.

The best description that I ever heard of him was from Sir Hugh Richardson, who was the British envoy in Lhasa when the young newly discovered three-year old Dalai Lama came to Lhasa for the first time. Richardson described him as "the most saintly of humans and the most human of saints."

That's why any of my movies about the Dalai Lama will hopefully reveal that aspect of him -- both the incredible compassion and wisdom but also the humanity -- because when you sense the humanity, then you realize "oh, maybe I can do that," or at least it's something to strive for.

SS: Can you tell us a bit more about the Dalai Lama's recent crossover into science and neuroscience?

ML: About 20 years ago, HH the Dalai Lama challenged some of the foremost neuroscientists working at that time and basically said: "we Tibetan Buddhists have figured out the technologies for overcoming afflictive negative emotions such as anger, greed and jealousy that lead to ignorance and violence." He said this knowledge really belongs to the world, but it needs to not come from one specific tradition because people will naturally have resistances to it. It really needs to come from science. So prove it. Prove that the Tibetan monks' technologies for overcoming these things are scientifically possible. And that sent the group of neuroscientists off on 20 years of research, including Dr. Richie Davidson who appears in my film and is one of the foremost proponents of this, putting people through MRI and EEG machines to test the hypothesis.

It's become pretty conclusive that any human's capacity for happiness and compassion can be learned and expanded and they've shown that with MRIs. The part of the brain that lights up with compassion or lights up with happiness can increase through meditation and other practices. So this is coming from scientists and they've proved that you can do this within a short period of time. They're now discovering there's such a thing that they're calling neuroplasticity; you can reformulate the way your brain works and the way you perceive reality and you can become a more happy and compassionate person. This part of the movie is key because it's very important to the Dalai Lama. He meets every year with cutting edge neuroscientists to have these dialogues about their work and then he listens and gives the Buddhist perspective on the same phenomenon. He's also said though that if science disproves any of their basic Buddhist tenets then they have to change the tenets. How many other religious leaders that you know would say such a thing?

SS: Has the Dalai Lama participated in the MRI research?

ML: I believe he's been there when other people have been in there but as far as I know he has not. But Dr. Richie Davidson has done extensive work with various monks, including Matthieu Ricard. Ricard is a brilliant, brilliant French monk who himself has a PhD in microbiology. We have a fabulous interview with him. Scientists figure he's had 34,000 hours of meditation so they use him as the baseline for all of their experiments to see how he responds.

SS: What is the most important part of this project to you?

ML: It's my own deep feeling that someday in the distant future, we who are alive today will be amazed that one such as he walked amongst us. It's sad to say but sometimes we don't realize what giants like Martin Luther King Jr. or Gandhi or Mandela were while they were alive. And HH the Dalai Lama is a remarkable, remarkable human being, totally unique, and he's here with us and we can learn from him. That's what I was hoping to capture in my movie: his deep wisdom, his compassion, and his humor. And I'd like to do it in a way that's engaging and entertaining. That's the challenge.