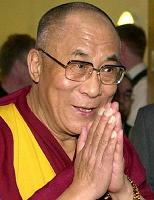 The XIVth Dalai Lama has sent a message to the next occupant of the White House by signing an appeal that could fundamentally change the prospects for eliminating nuclear weapons world-wide.

It's called US Leadership for a Nuclear Weapons-Free World -- An Appeal to the Next President of the United States, and it's a grassroots effort organized by the Nuclear Age Peace Foundation to gather one million signatures to present to the next President on Inauguration Day in January 20, 2009.

When the Dalai Lama received the Nobel Peace Prize in 1989, he put his position succinctly: "We know that to wage a nuclear war today, for example, would be a form of suicide."

His commitment to nuclear disarmament has only strengthened over the years. Earlier this year, before 65,000 people in Seattle's pro football stadium, he made the case for eliminating nuclear weapons -- just as he did in this video in 1991 when he received the Distinguished Peace Leadership Award.

"By far the greatest single danger facing humankind -- in fact, all living beings on our planet -- is the threat of nuclear destruction. I need not elaborate on this danger, but I would like to appeal to all the leaders of the nuclear powers who literally hold the future of the world in their hands, to the scientists and technicians who continue to create these awesome weapons of destruction, and to all the people at large who are in a position to influence their leaders: I appeal to them to exercise their sanity and begin to work at dismantling and destroying all nuclear weapons."

The Dalai Lama believes this is a legacy issue -- literally about the protecting the future for humanity.

The appeal's seven steps show a clear path to making the world safer -- each step would reduce the threat from nuclear weapons.

Two major polls last year (Worldpublicopinion.org/University of Maryland; Angus Reid/Simons Foundation) both found that more than 70 percent of the American public wanted to eliminate all nuclear weapons. Yet, many people assume the goal is just too hard to accomplish. And many simply do not know what steps we might take to reduce and then eliminate the threat. Large numbers of people could benefit greatly from education not only about the threat, but about a viable strategy to remove it.

That's why the US Leadership Appeal is filled with prudent ideas for a safer world such as de-alerting nuclear weapons, no first-use and a permanent ban on nuclear testing. Here are the key points.

•No First Use. Make legally binding commitments to No First Use of nuclear weapons and establish nuclear policies consistent with this commitment;

•No New Nuclear Weapons. Initiate a moratorium on the research and development of new nuclear weapons, such as the Reliable Replacement Warhead;

•Control Nuclear Material. Create a verifiable Fissile Material Cut-off Treaty with provisions to bring all weapons-grade nuclear material and the technologies to create such material under strict and effective international control;

•Resources for Peace. Reallocate resources from the tens of billions currently spent on nuclear arms to alleviating poverty, preventing and curing disease, eliminating hunger and expanding educational opportunities throughout the world.

Many people, when they learn the facts about the issue, readily agree that planning to get rid of nuclear weapons is the safest way to deal with the threat. It's common sense. The following question resonates with them: Do we really want to wait until one of these terrible weapons is used again -- with great loss of life -- before we realize that we really should take steps to address, reduce and eventually eliminate the danger?

Education can bring such latent logic to the surface and motivate people to prioritize the issue. After all, the goal is one of non-partisan public safety. We are talking about eliminating the greatest immediate catastrophic threat to humanity. In common sense terms, how can you be against the removal such a threat? And yet, the United States is. Only one nation voted against all 15 nuclear disarmament resolutions at the United Nations in 2007. It was the United States.

So the reasoning is clear and concrete. If US policy changes, the goal of nuclear weapons abolition becomes possible. Therefore, it makes sense to use education to spur public pressure for such a change in US policy.

For 25 years, the Nuclear Age Peace Foundation has been a voice of conscience on nuclear weapons issues. We believe people of conscience must take action now. To remain silent is to approve the status quo, which is likely to lead to further nuclear weapons proliferation with a high possibility of nuclear weapons use. The time has come for the United States to take leadership to build consensus with other nations to solve the 21st century's most imminent danger.

Which begs the question: will you join with the Dalai Lama to send a message to the next occupant of the White House?

People of integrity can lead by example. Simply put, your support of this US Leadership Appeal will itself provide leadership, inspiring others -- your friends, your family, your workmates, your neighbors. In addition to the Dalai Lama, Daniel Ellsberg, Frances Moore Lappé, Ben Cohen, Susan Sarandon and Peter, Paul & Mary - among thousands of others -- have signed the Appeal. Please join them, and us, by signing up now.

We will gather all the names of those who support the campaign and deliver them to the next President after Inauguration Day January 20, 2009.

The time to act is now. Our world is heading closer and closer to the tipping point -- where problems like the proliferation of nuclear weapons and climate change start to destroy our ability to respond to the crisis, where humanity faces long-term degradation of living conditions, where future generations are robbed of their birthright to peace and a sustaining Earth. The truth is, we have to change business as usual if we want to maintain this beautiful planet. It's not too late to make a difference. But we must educate people to motivate them. And we must motivate them if we want public opinion to change public policy. Will you join the Dalai Lama in this effort? It only takes a few seconds to help make the world safer.