A peacemaker for the ages walks among us. Whether he is blessing world leaders who are notorious for war, accepting the Nobel Peace Prize, or speaking of his own exile from his homeland of Tibet, the message of His Holiness, the 14th Dalai Lama of Tibet is the same. "This should be the peace century."

Everyone present at the Global Compassion Summit at the Bren Events Center at UC Irvine on July 6, 2015 was there to celebrate the 80th birthday of His Holiness, the Dalai Lama, and to learn more about how to embody and promote the values that are close to his heart - gratitude, peace, compassion, education and sustainability. We all worked hard and planned in advance to get there. The smiles, applause and love that erupted when His Holiness stepped on stage that morning were infectious. 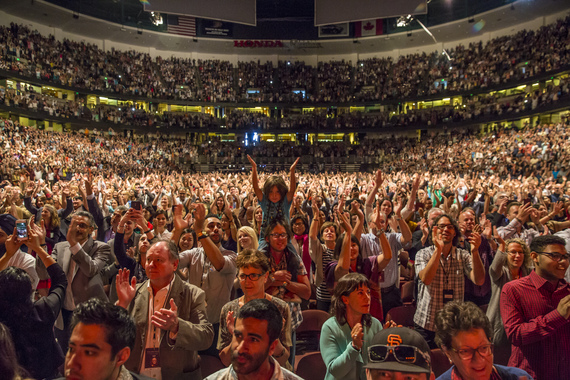 There are certain occasions, which lift off from the gravity of the moment and become a time stamp for the centuries. Amidst the fun, the celebration, the singing and the gifts, there was a loud and clear call to action on behalf of our planet and humanity. The speakers were united in the message that if the wisdom of our treasured peacemaker is not embodied and enacted now, if we do not collectively shift our focus to reversing the effects of climate change, the consequences could be dire and irreversible.

"Nations take interest in their own nation first and then global interest," the Dalai Lama told everyone in attendance. "They should take global interest first, and then national interest. Serving humanity means that each nation gets the maximum benefit. We have to look at this holistically," His Holiness continued.

The question then becomes quite simple. What will we do now to try and save humanity from the effects of climate change, which include massive droughts, rising sea levels, severe weather and the mass migration of people fleeing to escape these disasters. If the scientists are right, climate change could submerge coastal regions worldwide. Bangladesh, the Florida Keys Highway and the San Francisco Airport, among many other valuable assets and communities, are at risk of going underwater. Golf courses in the Florida Keys are already planted with salt-tolerant grass.

Perhaps the best news delivered at the Summit is that the physician of His Holiness predicts that the Dalai Lama is so healthy, he can live another thirty years. That would be a blessing indeed. It looks like we're going to need him.

Shifting to a Global View
So, how do we shift to a global view? Today, more than ever, global citizens are scrambling to make ends meet, trying to keep their homes from foreclosure (over 7 million American homes are still seriously underwater), hoping to earn more or get a better job, defending national boundaries on foreign soil and stockpiling nuclear weapons that could blow our planet up dozens of times. Our collective home is heating up, with consequences that could be dire for all of humanity, including the plants and animals upon whom we depend for our sustenance. Yet we're too crushed by the ongoing developed world debt and terrorism crises to notice a collective planetary climate emergency that is already visible on the horizon.

During lunch, I randomly selected a student to discuss climate change. Raphael, who was born in The Philippines, was completely unaware of the gravity of the situation, though he wishes he could have gone to see the Dalai Lama. "I'm not really aware of climate change issues, other than the rising sea levels," Raphael told me. "My classes focus on cultural and economic issues." Raphael made it clear that he wants to get more involved on environmental issues, but he just doesn't feel very knowledgeable about what's going on or how to have an impact. (As a reminder, The Philippine Islands have already experienced one side affect of global warming - an increase in severe weather. In 2013, Typhoon Haiyan killed at least 6,300 people living there.)

Like so many of us, Raphael is hearing a call to action somewhere off in the distance. In fact, each one of us can start here and now with sustainability, even without complete awareness of all of the facts and solutions. If you want to give His Holiness, the Dalai Lama a special and priceless gift for his 80th birthday, begin by sharing the information and wisdom spoken on the stage at the Global Compassion Summit. I have created a slide show with photos and important messages spoken at the Summit, which you can view directly below. Create memes of the quotes of your favorite Nobel Laureate, activist or celebrity and share with the hash tag #DalaiLama. Go through the list of 31 ways to become more sustainable from my "Make Earth Day Every Day" blog. Add to the list and share that, too.

Priceless Moments at The Global Compassion Summit, celebrating the 80th Birthday of His Holiness, the 14th Dalai Lama

The 80th Birthday Celebration of His Holiness, the 14th Dalai Lama

Thank you to Harmonica Agency for the amazing photographs from the Global Compassion Summit that are published in the slide show.

The Global Compassion Summit was co-sponsored by Friends of the Dalai Lama, the University of California, Irvine and the Center for Living Peace.

Special thanks to Lora O'Connor, my soul sister for peace and sustainability, for her assistance in getting quotes and pictures for this blog. Lora wears many hats and is an angel for our planet and humanity, often behind the scenes, at almost every conference I've been to over the last decade. For the purposes of this important gathering, Lora is a chief compassion officer at CompassionateCalifornia.org.