"Shall we dance?" I say to my bride on Valentine's Day.

My arms outstretched, Ceci places her hands in mine, and I draw her in close. Our eyes meet and time melts away. Dance and love is all.

Dance in various forms has been an unbroken thread in our relationship.

When I met Ceci in 1996, she'd journeyed from Chiapas, Mexico to Montclair State University in northern New Jersey to earn her graduate degree in education in one intensive calendar year. An inveterate dancer, she somehow found time to venture to New York City each weekend and continue her dance training, at Martha Graham School. And she found time to take a weekly lesson with yours truly.

Ceci and I took our first dance class together in the fall of 1996, after spotting an announcement posted on the bulletin board at the café where I convened weekly Socrates Cafés. It promised to teach us the rudiments of Western Swing, Salsa, Rumba.

Until then, my relationship with dance had been of a wayward, styleless, fair-weather sort. In my more youthful years, my stabs at it were limited to rather campy disco and simple line dancing.

I demonstrated remarkable ineptness at learning the most basic steps during those first classes. But my frustration was mitigated by Ceci's patient encouragement and insistence that she couldn't have asked for a better partner.

I stayed with it, practiced in my spare time. I improved. Ceci's movements were elegant, languorous. She watched the instructor demonstrate a new step, and she'd match it. It took me more time. Still, my workmanlike, earnest movements became smoother.

I learned to guide Ceci. I became less self-conscience, practiced enough to lose myself on occasion in the rhythm. 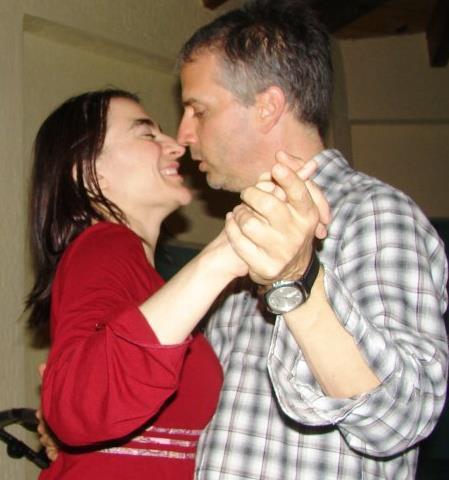 Ceci studied philosophy as an undergraduate in teeming Mexico City. Like me, she was a particular aficionado of German philosopher and social critica Friedrich Niezsche, a devotee of dance. Ceci and I subscribe to Nietzsche's generous conception of what dance amounts to; it encompasses, as he puts it in Twilight of the Idols, "dancing with the feet, with ideas, with words."

He might have noted that dance itself can be an inquiry, a searching and problng exploration.

Dancing at its most sublime, to Ceci, is of that sort. At age 15, she was accepted in the Martha Graham School. Several times a week, she traversed teeming Mexico City, braving on her own its dicey public transit system to get to dance calss. Nothing would stop her from immersing herself in the world of modern and jazz dance and ballet, then returning home alone in the late hours.

Ceci continued with dance even while juggling demanding university studies. She only parted company with the Martha Graham School when she moved to Chiapas in 1995, where she lived and worked as teacher in an indigenous community.

My relationship with Ceci started as a dance of minds, all the way back in late summer 1996, at a Socrates Café I convened in Montclair, New Jersey. Ceci was the sole person who showed up - the first and only time this has ever happened.
She and I sat across from one another at a table and explored the question, "What is love?"

I was so taken by her beauty that I didn't always attend carefully to the philosophical pearls she shared. When I asked a question more than once, she patiently repeated her response, the picture of politeness. She knew what was what. Near the midpoint of our tete-a-tete, the impossible thought occurred to me that if all unfolded as the diehard romantic in me was already dreaming it might, I'd have ample time in the future to continue exploring this eternal question, and many others as well.

We married 18 months later. Ceci has been my modern Diotima, a reincarnation of Socrates' great teacher about love, a whirling dervish of piercing insights on matters of the mind and heart.

Over the years, we have explored thousands of questions -- some just between the two of us, some with the thousands of people around the globe who've engage with us in a Socrates Cafe, others with our two daughters -- Cali, who lives for ballet, was entered the world with the assistance of a midwife exactly ten years to the day Ceci and I first met, and Cybele, born in 2013 on our nation's real Independence Day, July 2, and has never met a rhythm she didn't like and couldn't master.

Anyone who's taken part in a Socratic Cafe dialogue that's worth its salt experiences a kind of dance, a do-si-do in which all involved link their figurative hands and hearts circle around a theme, twirling around this idea and that.

Dance is an inquiry, a search, at times halting, tentative, at others a deep dive with no hesitancy. It is a spirited delving into and exploration of dimensions for which words don't suffice. It makes me a better life partner, better lover, better dad. Dance heightens my romance with life and those in my life.

Nietzsche characterizes dance as "a blissful, peaceful state of motion. It is the artist's and the philosopher's vision of happiness." I'll buy that.

Now here Ceci and I are, on Valentine's Day, nearly twenty years after we first met, dancing once again. My wife and I look at one another, lean back, clasp hands. A distance is bridged, a chasm traversed, two hearts beating as one. Tenses have lost most of their significance.

I am not so much swept up in the moment, as part of the moment. If my face is in any way a reflection of Ceci's, it reveals a childlike exuberance, a joy-filled state, a reawakening, a rekindling, a bridging.

Until our next dance date, Happy Valentine's Day, my love.