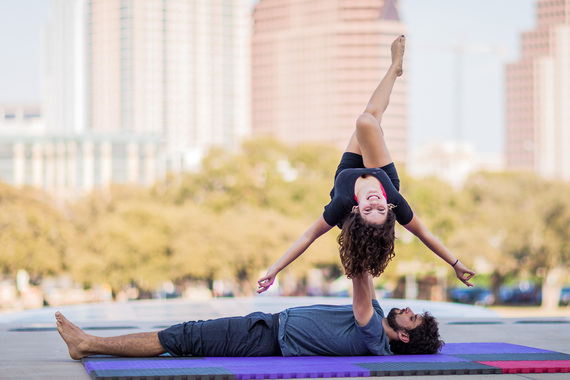 Even as Yoga explodes in popularity, its essence is being lost.

Yoga, an ancient eight-fold practice originally designed to assist sincere spiritual seekers to access deep inner states of meditation and contemplation, seems to have become connected with a pervasive myth that more is better.

There are more styles and names of Yoga than can be imagined, which always prompts the question I am so often asked: "What kind of Yoga do you practice (or teach)?"

I am fortunate to be able to respond that, while I have been exposed to two other "styles" of Yoga, I am now learning this practice from an unbroken lineage of teachers extending back to ancient times. My present Yoga teacher, Acharya Shunya, learned Yoga from her grandfather, who learned from his father, a 19th century saint, and from master yogis in the Himalayas (the home of Yoga and many other spiritual practices from India).

The true and highest purpose of the practice of Yoga I have been fortunate to learn and teach is Atmabodha: awakening to the truth of our spiritual nature. The aim of Yoga is really spiritual transcendence -- not merely physical dexterity or flexibility.

While Yoga asanas (physical poses) do definitely provide the body with many amazing benefits, the real purpose of Yoga is to purify the mind so that it may rest in its true spiritual essence. The word "Yoga" means "to unite" or "yoke together" in Sanskrit.

Yoga is a Vidya (body of knowledge) that facilitates union with our own highest consciousness. When we collectively reduce the practice of Yoga to being merely physical, we miss an incredible opportunity to benefit from a great Vidya.

The danger with the trendy nature of Yoga is that the practice will only continue to lose its philosophical and spiritual foundation and aim. The fact that there are more and more "types" or "styles" of Yoga emerging almost every day, it seems, has reduced the greatness of Yoga to associate primarily with various personalities, rather than with its ultimate purpose.

While there may now be many names connected to the practice, there is only one Yoga. And while most people these days may be more likely to associate the phrase Ashtanga Yoga with one of the many styles of Yoga rather than as a way to describe its eight-fold practice, it is important for Yoga teachers to return to the roots of Yoga.

At Vedika Global, where I both study and teach, we are blessed to learn not only Yoga, but Ayurveda, Vedanta and other Vedic sciences by studying the source scriptures of each Vidya. This scriptural study ensures that the teachings are as authentic and undiluted as possible in their transmission.

There are five Yamas and Niyamas, which are similar to the 10 Commandments, and that form the ethical foundation of Yoga practice. Only when we are living an ethical life, through following the 10 universal values that Yamas and Niyamas represent, can we start to learn Asana and Pranayama (extension of the life force through deliberate breathing exercises).

One of the Yamas (literally meaning "self-control") is actually Brahmacharya, which does not mean total sexual abstinence, but rather a mindful reigning in of all the senses. Though the practice of Yoga does have a very physical component, by stressing the importance of control over the senses and the value of modesty, the ancient Rishis (sages) outlined a path of noble living for Yoga practitioners prior to even teaching them physical practices.

With just the way students and teachers alike adorn themselves for Yoga classes these days, it is really no wonder that we are seeing such an increase in false gurus and sex scandals in the Yoga community.

And while the word "Yoga" has now begun to become more and more connected with sexy clothing, competition, fearsome poses, and scandals, it is important to note that Yoga Asanas comprise only one of eight total steps along the path of Yoga.

"Asana" is a beautiful Sanskrit word that means "seat." By literally strengthening our ability to sit still for extended periods of time to delve deeper into study of the higher Self, devoted practice of Asana and Pranayama lead into the practice of Pratyahara (withdrawal of the senses from external objects), Dhyana (sustained meditation), and finally, to Samadhi.

Samadhi is a state of Self-realization and equanimity, in which we are able to rise above joy and sorrow and live in the freedom of our true Self.

Samadhi is a synonym for Atmabodha, a Sanskrit word that derives from the root words "Atma," which is "soul," and "Bodha," which means "to know." The spiritual practice of Yoga, therefore, extends far beyond the physical body and learning more and more advanced Asanas, to empower us with the sacred knowledge of who we really are, why we are here, and how to make the most of our time on earth.

Ananta Ripa Ajmera is a Certified Ayurveda Health Practitioner and Certified Yoga Instructor. She leads wellness trainings at Stanford School of Medicine's Health Improvement Program, Stanford Health Care, across California Probation Departments, and at Vedika Global, a leading school of Ayurveda and Yoga in the U.S. She is a California Standards and Training for Corrections (STC) Division of the Board of State and Community Corrections (BSCC) Certified trainer. Visit her website, WholeYoga-Ayurveda.com to learn how you can start taking health into your own hands.

Ananta Ripa Ajmera
Yoga Teacher + Ayurveda Practitioner at WholeYoga-Ayurveda.com; I love teaching how to take health into your own hands - my students report 47% less pain, 46% better sleep, 80% feel less stress, amongst other outcomes