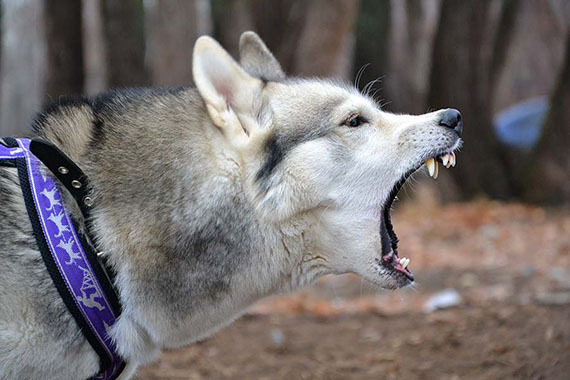 As any police officer can tell you, domestic violence calls can be tricky. The officer arrives at the home where a couple's heated argument has progressed to violence. But although the two have been screaming at and even hitting each other, when the officer arrives, a strange phenomenon occurs. The target of the violence for both parties, initially each other, shifts to the officer. This is obviously a dangerous situation for everyone involved.

Now let's consider two dogs who are fighting in the home. What started out as a skirmish has escalated to the point that the owner feels the need to step in. She approaches and tries to grab one of the dogs by the collar. The dog whips around and bites her on the arm. What's going on here?

Both scenarios are examples of redirected aggression. It can happen when emotional arousal becomes so intense that it needs a release, and the target shifts from the original opponent to the source of interference. That's one reason people are bitten when trying to break up a dogfight. It's unfortunately something most of us learn the hard way, and I'm no exception; I could show you scars.

Redirection doesn't only happen to third parties, though. It can happen between two dogs when caused by another. For example, a Labrador Retriever and a German shepherd are at the dog park, happily romping and playing together. A Boxer comes along and approaches the pair. Suddenly, bodies become stiff. Tension is in the air. Just as the Boxer and the Shepherd are cautiously checking each other out, the Lab slaps a paw over the German Shepherd's shoulder as if to say, "What's up? I thought we were playing!" The Shepherd turns and lashes out at the Lab. Again, the tension needs a target, and in this case, instead of being focused on the cause of the tension, it's redirected to what drew the attention away, much as a lightning rod diverts lightning from a structure.

Another common scenario is when two or more dogs are behind a barrier, such as a yard's chain link fence. Someone passes by with another dog. The enclosed dogs begin to bark and jump at the chain link. They can't get to the dog, so they become very agitated. Frustration builds. When it reaches a boiling point, the dogs may redirect on each other, thanks to an unfortunate combination of high arousal and barrier frustration. Barrier frustration can easily turn to redirected aggression in other scenarios, too: picture two dogs who both want to go out to the yard because they see a squirrel. They jump, whimper, and claw at the sliding glass door that leads to the yard. Frustration builds, and soon they turn on each other.

Anytime there is over-arousal, aggression can follow, and it will find the most convenient target. So what can you do to avoid redirected aggression? Be aware of the potential. Try to avoid putting your dogs in situations where redirected aggression might occur. If you see a situation building, interfere before it escalates. Teach a solid attention cue, meaning your dog stops whatever he's doing to look at you when you call his name. Don't jump in to the middle of a dogfight and expect not to be bitten. (How to properly break up a dog fight is a whole other blog.) Don't approach dogs behind a barrier if they seem agitated; if they are calm but then become agitated, leave. In many cases, redirected aggression can be avoided. The more we understand about how dogs think and react, and the more vigilant we are about recognizing their body language and actions, the safer we can all be.

Nicole Wilde is a canine behavior specialist and author. Visit her website www.nicolewilde.com.