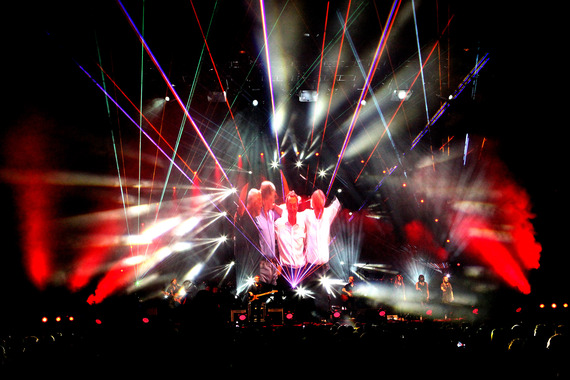 While making a film about John Lennon's power to continually draw people to him, I've gotten the opportunity to meet a few tribute performers. I was surprised to find them uniquely to be themselves, and though they love playing at being John and spreading his sound out to the world, they are doing it as artists... it's a great way to make a living and keeps the music alive. Plus they are free to play the great music without any of the complicated by the inner fighting of the original groups.

I've never seen the band Brit Floyd who will be coming to the Beacon on May 12 for the Space & Time World Tour, but spoke to musical director Damian Darlington. Damian has played with Brit Floyd all over the world. The productions are elaborate with the kind of stage magic one could expect of Pink Floyd. Damian said, "we give the audience a chance to experience what is was like... and they find something deep inside."

Pink Floyd's philosophic lyrics and psychedelic sound made them one of the most commercially successful and influential groups in music. The co-founder Syd Barrett, a brilliant artist, had to leave the group after years of mental struggle. The stories about him are legend... like walking out onstage with Brylcream and Mandrax in his hair, all of it melting under the hot stage lights, so that he looked like a candle on the wan. The other members played on in different combinations for years, despite quarrels about all the things rockers quarrel about. Through it all, though, they produced stellar albums: The Dark Side of the Moon (1973) and The Final Cut (1983), Wish You Were Here (1975), Animals (1977) (1975), The Wall (1979) and The Final Cut (1983).

Their music could be dark and sad, but always deep and moving. They created dreamscapes where all feelings were up for exploration.

Damian on his rare time off also has an acoustic band, Acoustic Unlimited. The other members include Rob Stringer, Ian Cattell, Bobby Harrison, Aaran Ahmun, Carl Brunsdon, Thomas Ashbrook, plus back-up singers. They have all been together a long while and are tight. The show has a new set list, 50 years of Pink Floyd and an enhanced light show.

It may still be possible to catch remnants of the real Pink Floyd... there are always rumors of reuniting but the last time they all played together was 2005 and since then members have died. So it's a very good thing indeed that Brit Floyd keeps the candle burning with what I'm expecting to be a knockout show.