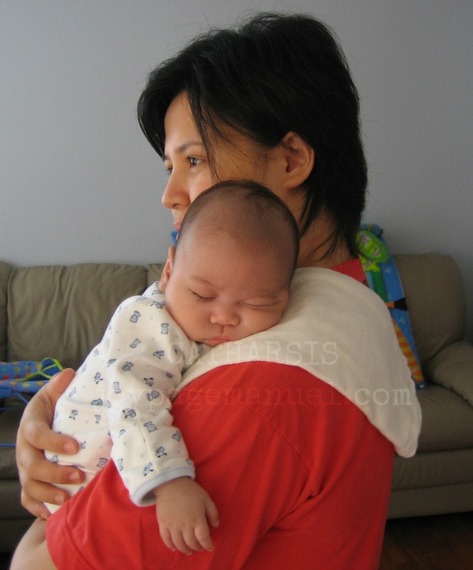 Always, a knot resides in my chest. A heaviness, a sense of impending doom that I try to control or deny. It's a daily unconscious routine of sweeping the crumbs of fear scattered wherever I walk. Sometimes I can avoid them like landmines, moving with such care trying not to disturb these fragile thoughts. Other times, I'm not as successful and have to deal with the blown up sense of panic, forced to make do with as many imperfect pieces of calm and sanity I can still salvage just so I can keep going, one foot in front of the other, pretending to be all put together.

I was afraid when my son was still in my womb. I didn't know if I'd be able to carry him to full term, if he would be normal and healthy at birth, if his umbilical cord won't strangle him, if my gestational diabetes won't affect him.

When he came out, I was afraid we wouldn't bond naturally. I didn't feel the overflow of love and affection so many other mothers spoke of. Sure I was immeasurably protective of my offspring but the feeling of deep attachment and falling in love with your baby didn't come to me as quickly as it might have to other moms. More than anything, I was just afraid I wouldn't know what to do and afraid I would break him.

After taking him home and as we both tried our best to fall into a healthy routine, I was afraid I wasn't capable of nourishing him enough. I wasn't producing the amount of milk needed to sustain him and every feeding session was just full of frustration and tears from both of us.

As he grew and the months turned into a few years, I was afraid my son had a speech impediment. I knew that cognitively, there wasn't anything wrong as he could clearly understand and follow instructions. But I felt his speech wasn't developing as quickly as I had hoped. The more I read and the more I heard from other mothers, the more afraid I got.

When he started school and his social circle got wider, I became perpetually afraid of illnesses. My germaphobia reached a level I've never experienced before, and incidents when my son got really sick that he had to be rushed to urgent care or be admitted to the hospital made the fear stronger and more insidious. It's the memory of those experiences that make me respond to even the most minor of illnesses in a completely disproportionate manner. I can't even begin to tell you how incapacitating it is. What I can say is that it takes a whole lot of will power and intense prayer to pull me out of those dark episodes.

My son is almost 9, obviously thriving, healthy, an avid reader, well-spoken and undeniably perfect (at least in my eyes). There really should be nothing much to worry about but I can't help it, can I? It's part of a parent's job description, only I take it to a whole new level.

In my younger days I always used to say that Love and Fear are polar opposites. Now that I'm older, I'm also less naive and concede to the realization that those two are merely sides of the same coin.

How can I love someone so much, so deeply, and not be afraid? Of not loving him right...of loving him too much or not enough...of anything that could hurt him...of not being able to give him my best...of not making him happy and completely cared for....of not always making sure that I'm doing everything to keep him safe...

But I'm also painfully aware that to love him fully means to allow him to experience the world with all its magnificence and dangers. Love demands that I also know how to let go just as much as I intimately know what it means to hold on. One side of the coin tells me to do everything in my power so that my heart remains shielded and intact, while the other urges me untiringly to let it relax and break open. The journey from one side to the other is never easy for any parent and I know that the only gateway is Faith.

It is not only faith in the Divine that has saved me numerous times but faith in the certainty that many others have come before me and survived. The truth is, I'm in the company of many, many courageous parents who have had their hearts bruised and broken but came out whole and triumphant, braver than when they first started. I find comfort and strength when I remind myself that I am never alone in these fears that consume me; that in some way, when I close my eyes and ask for courage, I can draw strength from another parent out there who's also afraid but is doing her best not to break down.

There is another parent with a child battling an illness. There is another parent with a child struggling with school. Another one whose child is bullied, and another with a teenager who's just learning how to drive on their own. There is always another parent like me, afraid and dealing with fears that haunt us even in our sleep. If I just try to breathe and focus on even just a speck of hope left in me, then maybe it can grow and be strong enough to pull not only me, but another parent in need of assurance that everything will be okay. The truth is, we need to keep it together for each other. If we can do that, it becomes a priceless gift to our children too, for they deserve parents who can love them wholeheartedly, with both sides of love and fear never denied, but always gracefully balanced and harmonized by faith.

More:
Parentsanxious parentinganxiety
Newsletter Sign Up
Raise the kind of person you'd like to know
Subscribe to our parenting newsletter.
Successfully Subscribed!
Realness delivered to your inbox