At a time of glad tidings and cheer, it has hard to be very optimistic about what we face as a country. Americans, credit-card alcoholics at an all-you-can-charge buffet, have over-indulged to the point of self-destruction; businesses life-supported by cheap credit and currently the US Government, the taxpayer, well you, continue to shed jobs at record pace; and then there's the impact of a federal deficit in the trillions -- did I mention that George Bush accumulated more debt than all previous presidents combined? All states are facing a budget crisis that will cripple services and aid and every two months, the new reports are getting worse.

Or am I being too optimistic?

The harsh reality is that America has been running on credit-driven fumes for at least a generation. What we've seen and thought was growth was nothing more than a house of cards built on monopoly money.

CEO pay that has gone through the roof?

People flipping Miami condos before they are even built?

Any and all, blown up by the free credit, no-money-down mentality that has become the core part of American culture.

Consumer debt has tripled since 1990 and we've experienced, already things we never thought we'd see and that can not be sustained. A negative savings rate for the country, Treasury bonds sold at 0% interest, and more. All signs of economic collapse that were ignored and shoved under the carpet, for a while at least.

What made the flood of cheap credit so devastating is that it came at a time of America's relative decline in power.

It is very dangerous for an empire such as America's, faced with ebbing influence around the world, to amp up on cheap credit and buy out the store. At the end of the day, you have a frustrated country, swamped in debt and merchandise it doesn't really need, wondering how to pay the bills. Japan has never really recovered from its bubble, and its bubble is looking pretty small compared to the one we're popping.

Look at this. Consider this image. 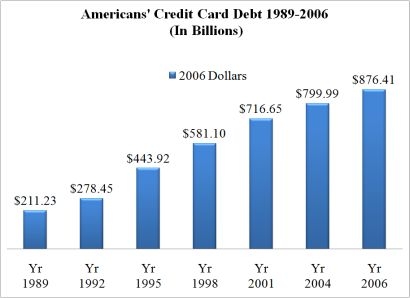 Businesses aren't doing much better. It is now estimated that total corporate debt is over $11 trillion dollars.

It is now, or soon will be, a depression.

The news will most certainly get worse, then much worse, then truly horrible, and then we'll see where we are. And like a consumer whose credit cards slowly get turned off one by one, we will, together, realize, there is no way to charge our way out of this mess, there simply is the need to go back to the basics, a more cash-driven society and attempt to work our way out of it.

As we do so, we will say goodbye to two things, consumer behavior that is untenable in the long run, and institutions around us who should have died a decade ago but hung on through the false life of cheap credit.

It will start with the housing market which will, once again, be determined by issues like the number of people living in a market, incomes and rental prices.

How far will housing prices fall? To the historical mean, which is another 20-40% down, depending on where you live. This graph is shocking for two reasons. One, how it disproves the basic belief that a house is a good investment, it's not. And second, how we should have seen a correction in 2002, but post 9/11, all we saw was a bubble. Currently prices are down 20% from the top that was shown in this graph, but clearly, they still have a long way to go. 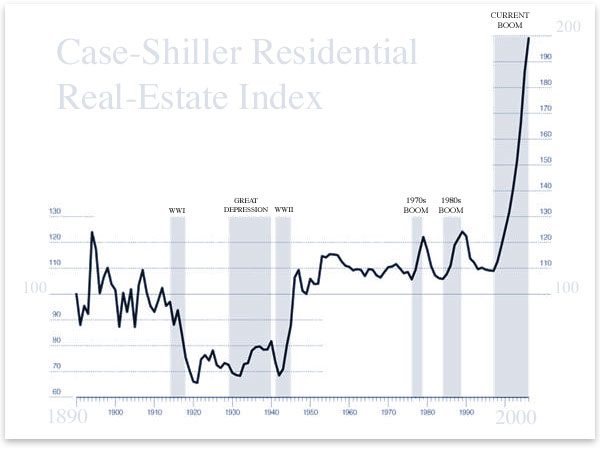 Will housing prices return to historical averages? Yes. But what's going to happen first? Here's the view of Whitney Tilson who was on 60 Minutes on Sunday and one of the few who predicted the mortgage disaster.

"We had the greatest asset bubble in history and now that bubble is bursting. The single biggest piece of the bubble is the U.S. mortgage market and we're probably about halfway through the unwinding and bursting of the bubble," Tilson explains. "It may seem like all the carnage out there, we must be almost finished. But there's still a lot of pain to come in terms of write-downs and losses that have yet to be recognized."

The housing bubble will deflate slowly, unfortunately for our recovery because now people are just pulling their houses instead of selling at a loss. "I'll wait till the market comes back" you here but it's not coming back, any more than lightbulbs.com stock is going to be worth $100 a share anytime again ever.

In real dollar terms, in our lifetime, housing prices will never be what they were in 2005 and 2006. They may never even get within 25% of that false peak. In the next 100 years.

In the process, there will be economic pain such as we have never seen.

It will, in the long run, be worse than the 1920s and 1930s because that economic hardship was not entered into with tens of millions of consumers sinking in credit card debt. That credit card debt was not packaged and resold as interest bearing investments to businesses and governments.

As we move through the next three to five years, we will see companies fold and disappear, as it should be. While Nissan, Toyota and Honda make cars here and do it well, the big three will disappear now or later. A further shrink of the economy means that like our parents, we will drive fewer cars longer. Each consumer will make his own informed decision when, and if, they buy a new car and that decision clearly will not include a car from the big three.

But this is symbolic of what will define this depression, the low-rate credit has allowed many weak businesses and institutions to hold on long beyond their normal economic life cycle.

Newspapers, who should have folded a decade ago, but held on and in some cases were bought and sold and are for sale again, will shutter. The Tribune Company is just the first, the question is: in 24 months, will any major metropolitan area still have a daily newspaper printed and delivered? Odds are, no.

The 6:00 pm Evening News, a legacy of two decades ago, will fold under the pressures are fallout.

Department stores, who are a generation past their expiration dates, will fold.

And it will go on. And on. Colleges, vacation destinations, golf courses, sports leagues, small and large businesses, 20% go away now. 20% more before it's over. 60% survive.

What will the future look like? What will we see next holiday season? And the one after that?

Who knows to be honest? Clearly, next December, things will be much worse than they are now.
But after that, in 2010 and 2011, as we approach the bottom, how will Americans, bloated and weak, after a generation of low standards and lower credit card rates, be able to rally?

Or will we fold, and go the way of past empires? And wallow in neo-nationalism as shown perhaps most recently and most clearly by Sarah Palin's campaign. Hate often rises from the ashes of collapse. It could happen here.

There is one unspoken truth lingering. In 1991/1992, normal business cycles would have pushed the economy down. But in the lingering madness of 9/11, George Bush feasted on the insecurities of Americans, cutting taxes, cutting rates, creating the boom.

I have to wonder if somewhere in a cave, the man who said that 9/11's goal was economic collapse of America is wondering if he didn't succeed. The reaction to the attack was a bubble. A bubble that let us buy more and more. A bubble that let us feel better when underneath, there wasn't anything that good to see.

I saw Henry Blodget write here that the market is now fairly valued by historical standards. I agree. I think it will decline further on the basis of declining economic conditions but not collapse.

I once asked a very smart investor when the Dow hit 12,000, someone with over $1 billion under management. Why is it so high? If the Dow is a predictor of what the economy will be like in 6 months, what does it see that we don't?

He stopped and thought about it.