The year is 2002. I'm sitting in front of a TV along with a group of girls excited to watch a new reality TV show that's come on air. There are twenty-some beautiful women all trying to win the love of a successful Harvard grad (who happened to be both homecoming king and valedictorian of his high school as well). Over the course of 7 weeks, he dates the women, gives roses to the ones he'd like to keep and in the end, chooses the woman he ultimately wants to marry -- aka the winner of The Bachelor.

Thirteen years later, the show is still steadily bringing in an average of 8 million viewers per episode (myself being one of them!). And so, I dedicate this post to my favorite Monday night guilty pleasure, The Bachelor.

One of the reasons I keep coming back to the show every season is for the hope of a happy ending. The most famous success story is of Trista and Ryan who have been together for over ten years and have two kids together. I also love Jason and Molly who didn't end up together at the end of their season, but got married later on. So just how many of the 28 seasons have ended in success? 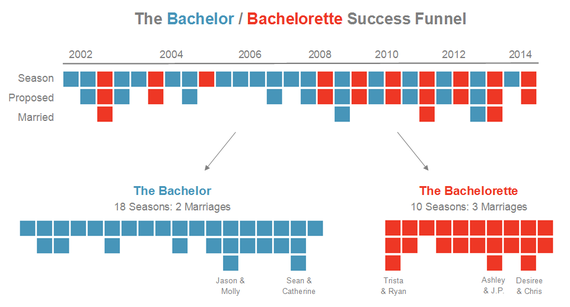 It turns out not that many do. In fact, only two-thirds of the seasons end with proposals. Then out of those proposals, only 5 have led to marriage, with the bachelorette having a better success rate at 30% versus the bachelor at 11%. The first successful season occurred in 2003 (Trista & Ryan), the second one happened six years later in 2009 (Jason & Molly) and there have been quite a few more happy endings in recent years as well.

While I watch the show in part for the love stories, the other part is for the contestants (and all of their drama), of course! I decided to take a closer look at all of the contestants who go on the show, starting with what they do for a living. I looked at the professions of the contestants in the final four, since I figured these were the more desirable occupations as they had made it so far into the show. 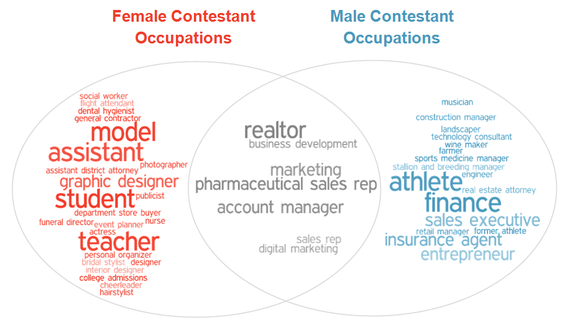 I saw that the most desirable females tend to be models, assistants, students and teachers, while the top men are professional athletes or in finance. There were a few jobs that were shared by both men and women such as realtors and sales reps. Out of the 200+ male contestants I looked at, I found that none of them had "assistant" in their title and only 2 were students (both eliminated in episode 1). Out of the 300+ female contestants, there were no engineers and they often had job titles like "dog lover" or "free spirit". [Note to self: Change job title from "data scientist" to "data diva".]

It's unclear the exact reason for this disparity. Perhaps there are few male assistants and female engineers that actually want to be on the show. Perhaps people in these professions aren't dramatic enough to be on the show. Or perhaps they've all found the love of their life already. ;) Whatever the case, please consider them for future seasons, ABC!

So my next question was, how old are these contestants, and which ones get picked? 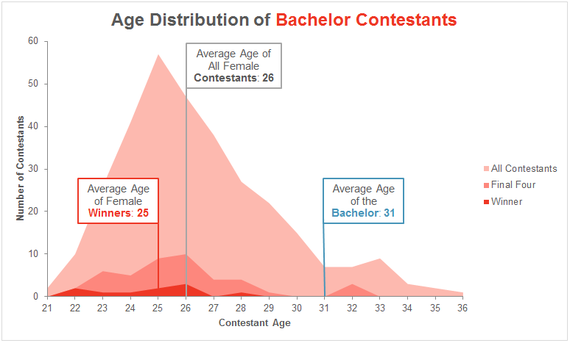 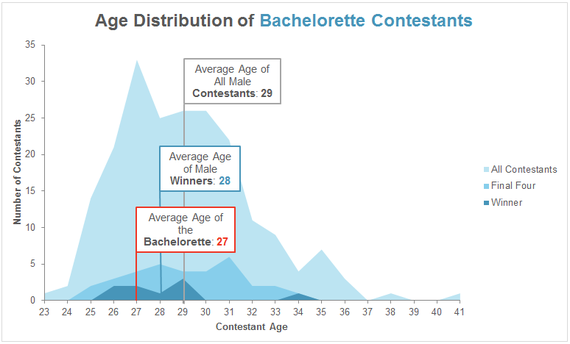 The average age of the bachelorette is 27 and the male contestants that she gets to choose from are 2 years older than her on average at 29. It's worth noting that the two oldest contestants who were 38 and 41 both got eliminated during the first rose ceremony. What's interesting is that again, the winner is a year younger than the average age of the group. It seems that when given the choice, both the bachelor and bachelorette tend to choose someone younger than the average of the contestants presented to them. [Pro Tip: Try to stand next to people older than you.]

Finally, I looked into the physical attributes of the women and men on the show and the most interesting tidbit I discovered was regarding height. I found that the bachelorette is 5'5″ on average, which is just above the national female average of 5'4″, while the bachelor is 6'1″ on average, which is a whole 3 inches above the national male average of 5'10". [Pro Tip: To be successful in life, be tall or wear heels.]

I will end this post by sharing with you some of the youngest (and cutest) Bachelor contestants on Jimmy Kimmel's The Baby Bachelor. Hopefully it will keep you busy as we all wait for next week's Bachelor episode!