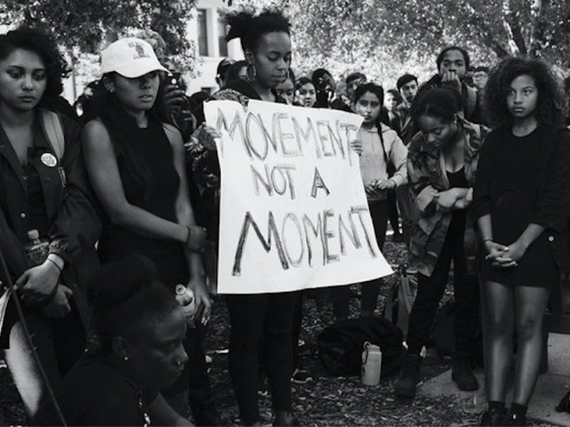 Everywhere we look there are protests in the streets and on college campuses. Whether it be #Blacklivesmatter, #concernedstudents1950, or the vigils held in response to the terrorists attacks in Beirut, Nigeria and France, protests concerning diversity and social justice issues seem, to the unobservant eye, to be popping up overnight. It appears as if we're at the dawn of a new unnamed age of activism, especially on college campuses.

One of the biggest lessons anyone can learn is to not fall prey to historical amnesia. Too many people are lulled into recalling only what transpired yesterday, as if the collective, complicated history of this country has no relevance to what is happening today. Compared to many of the countries where civil unrest frequently occurs, we are a relatively young country, but one fraught with a significantly complicated past. What is important to note is that oftentimes the mistakes around social injustice we consistently repeat become more and more detrimental each time they incur because after all these years we are supposed to know better.

In the wake of the general public being made more conscious, through the persistent (and long overdue) media coverage of the daily struggles that continue to plague marginalized groups and individuals, I would like to offer a suggestion as to how allies can assist young people who are positioning themselves as an emerging "Movement." The most salient message GenX or older activists can instill in today's Movement is pragmatism. Pragmatism is defined by the New Dictionary as "dealing with things sensibly and realistically in a way that is based on practical rather than theoretical considerations..."

I am intensely cognizant and genuinely empathetic to the immediate need to forcefully confront the consistent barrage of injustices that occur on college campuses, urban neighborhoods, Parisian cafes and football stadiums. Nonetheless, it is imperative that those of us who have for decades experienced these same injustices in our lives in a multitude of ways, teach these energetic young persons that one of the ways sustainable change occurs, is not just through immediate actions, but also, and perhaps more importantly, a calm pragmatism that occasionally exceeds our capacity to withstand wrongs. In other words, I am calling for a pragmatic activism that, upon reflection, has transpired throughout history during so many other social Movements.

Whenever I see individuals confronted with dire uncertainty, when the people in the streets are angry and want change now, I am reminded of the often-repeated line attributed to President Franklin Roosevelt. In the 1930s when Roosevelt was faced with confronting the burgeoning labor movement and the expanding Civil Rights Movement, his response was "I agree with you, I want to do it, now make me do it."

What does "make me do it" mean in the most basic terms? It means that we need an inside outside strategy. It means expanding beyond moving bodies towards civil actions in the streets to moving hearts and minds. The former is "easy" to do. People rally, march, protest and micro changes take place. What is considerably more difficult is changing hearts and minds, and more importantly the hearts and minds of institutions and organizations. This work entails serious heavy lifting but is something that is significantly more long term. For students who attend college for only four years and are not around long enough to see the fruits of or the enactment of sustainable meaningful long-term change, asking them to be "patient" is a monumental task.

How do we ask students to know their history, potentially jeopardize their tenure on campus, and persist in the wake of insurmountable odds when they are only on campus for four years? How do we ask these students who are soon to be entering the workforce and going back to their home communities to continue engaging in the difficult work of dismantling institutional and structural inequality once they graduate college?

Engaging students in the convoluted reality of the non-linear progression of the "long game" is perhaps one way to contextualize and mitigate their frustrations when change does not occur immediately. While it can be construed as a "normal human response," anger cannot be seen as the end, but rather the beginning. After the initial anger occurs (I do not for one instance mean the anger leaves, but perhaps begins to diffuse), how one response to that anger is where pragmatic activists can find a fruitful place for engaging in enacting sustainable, long-term change.

In order to benefit from "leaning into" the anger, we need to employ a pragmatic activism that assists to educate modern-day young, energetic and captivated change agents to both the historical realities that social transformation occurs both incrementally (albeit far too slow for many of us), and sometimes not along a direct continuum. Change has its setbacks, challenges, and triumphs. As Debbie Allen's character in the film Fame said "change cost, and right here is where you start paying...in sweat!"