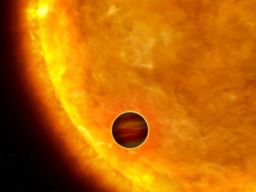 Is our planet a mundane world in a universe infected with life, or a special place fine tuned to support life? If the recent discovery of hundreds of exoplanet (Planets beyond our solar system) candidates is of any indication, we may have to shed our weak anthropic view of the universe.

Planet hunting is an extremely demanding venture as opposed to mapping the stars. Planets are buried in the cosmic ocean filled by the waves of star light. It takes a determined and collective effort from humankind to churn this ocean to discern the hidden planets. While the estimated number of stars in our galaxy is around 200-400 billion, the planet count is still a few hundred --that itself speaks to the nature of challenge in the planet hunt.

Ever since the day Galileo knocked on the doors of heaven with his newly found telescope, to unveil the unknown, the man and his machines have evolved to become skilled planet hunters. Now, 400 years after the Galilean adventure, an array of space and ground based telescopes scan the sky with their unblinking eye for the exoplanets.

Among those machines, Kepler observatory, bearing the name of Johannes Kepler (known for Kepler's laws of planetary motion) has an unparalleled position. Launched by NASA, in 2009, Kepler is designed to search for earth-like planets, small rocky planets in the habitable comfort zones from their host stars -- neither too hot, nor too cold.

Kepler scans about 150,000 stars simultaneously in a star-rich patch of the sky, considered to be the fertile ground for planets. When these planets cross the line -of-sight between the star and the observing eyes of Kepler, a dimming of the star light is recorded by the sensitive instruments on-board the craft. An earth like planet must cause such dimming of the parent star in about a year. This technique known as "transit" is one of the methods employed in potential planet detection.

The current exoplanet count stands at about 460; none of them are earth-like, though. With the planet hunting telescopes like Kepler on the move, this number could soon double and that may even include a copy of earth -- a Goldilocks planet just right for life.

Kepler has just begun its mission, but it already added five more planets, within a year in orbit, to the list of confirmed exoplanets.

The Kepler observations have also identified about 700 stars believed to be harboring planets, using the transit method, with some of them even containing multiple planet systems. A conservative estimate puts at least 400 of them as capable of hosting planets with masses similar to that of earth.

These potential planet-candidates need a second layer of verification before finding a place in the exoplanet catalog. To eliminate possible false alarms and identify the actual planets, the Kepler team has to follow-up with the ground and space based telescopes.

The Kepler team says that the data will be released to the scientific community in 2011. Many believe that finding an earth like planet is not even a question of time rather it is a question of right tools in right space.

The detection techniques such as transit and gravitational microlensing will provide the basic details of the alien planets. However, this is not an indication of any close contact with such alien bodies as the nearest exoplanet is even a few light years away from us. Our fastest moving spacecraft would take thousands of years to reach there for a direct observation.

So far, the majority of the known exoplanets are gas giants with extreme conditions, cold or hot, which leaves the position and structure of the earth, at least for time being, very special -- a rocky planet in a habitable zone from its parent star.

The first ever detection of a rocky planet in 2009, about 400 light years away from our solar system , was something we came close, but this planet positioned so close to its parent star with an average surface temperature 1000 degrees Celsius, a disqualification to become a twin of the earth.

The confirmation of an earth-like planet will indeed be met with much excitement and that will spark a debate in the scientific community about our place in the universe. Kepler is also capable of picking up the fingerprints of life vis-a-vis the molecular evidence of water and oxygen. A rocky planet in a comfort zone is a perfect place where evolution can kick off-a breeding ground for life.

If our planet and life are the result of a mere cosmic accident, it is bound to happen again in the vastness of space and time. On the other hand, if we are the unique outcome of a "fine-tuned" universe, we have the right to know the glory of that act. Either way, the exoplanets will continue to fascinate us.

After all, anthropocentric belief is not that appalling, if we regard ourselves as part of the nature along with whatever we find. As the astrophysicist Neil deGrasse Tyson noted, "We are in the universe and the universe is in us." Let there be harmony of the worlds.