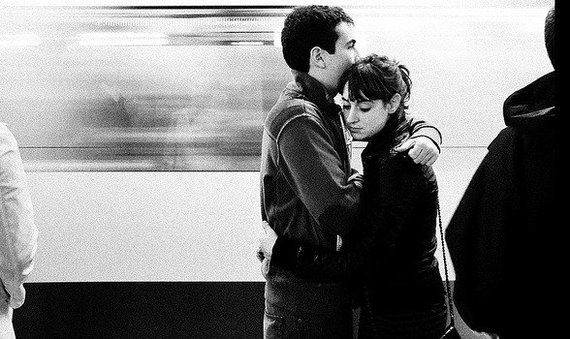 It was love at first sight -- well, almost. The first time I saw my wife, I felt something I couldn't describe. I was 17 years old and working at Burger King. She was a 19-year-old manager.

She tried to show the employees who was boss, so many of our co-workers couldn't stand her; I saw past her bark. We started off as co-workers, but quickly became friends; that friendship turned into something more. We were married six months after we met.

The success rate of marriages today isn't very high, and the numbers are more depressing when you get married young. We got married the day after I turned 18 not realizing how hard life would be for us.

Family and friends told us getting married that young was a bad idea, but we didn't care. We were head-over-heals in love and ready to take on the world together.

The first few years were OK. We fought every now and then, but nothing major. I started a service business at 19 that quickly grew into six-figure career in a year.

I didn't know anything about business, however. So I completely mismanaged it. In April of 2011, we were $180,000 in debt and fighting constantly over money problems.

After fighting for most of the beginning part of that year, we decided it was time to split up, and possibly end our marriage. I replay that conversation often, and it still brings tears to my eyes.

The day after we separated was one of the worst days of my life. Waking up at a friend's house, and not seeing my love sleeping next to me was unbearable.

I cried. I yelled. I thought about committing suicide. I thought my life was over and that our children would end up seeing me as I saw my father after my parents divorced. Thoughts of someone new entering her life sent me to the bathroom throwing up.

That year, in general, was rough. There were the money problems, there were our problems and I was 170 pounds overweight. The day after we separated was my wake up call.

After crying my eyes out that day, I woke up the second day determined to radically change my life. No matter what it took, I was going to do everything it took to live a life of no regrets.

I put on my tennis shoes that second morning and went for a run. I couldn't run a long --because it felt like I was having a heart attack -- but I was determined. I cut all the junk food out of my life and started a healthy diet. I tried calling my wife to tell her I loved her, but the call went to voicemail.

I woke up every morning determined to make it better. It took a lot of days of crying and changing to see progress. During this time, my wife and I started talking again. Talking led to a few dates and us getting to know each other all over again.

The day before our divorce was supposed to be final, we went to court to get the case dismissed. We chose love over our past. As of today, we have been married 16 amazing, but hard years. We earned this marriage.

Love is a decision.

Falling in love is the easy part. When you first get those feelings, the excitement can propel you to look past anything, As the honeymoon phase wears off, reality starts to set in.

Here's the thing though, you decide what you want that reality to be. A wise counselor told us love isn't a feeling; it's a decision. You decide to love and stay in love.

Feelings come and go, but when you wake up and decide to honor your vows, you're choosing love. When you decide you would rather die than betray the person you committed to, you are deciding to love.

There will always be another good-looking person who has a great body and just screams lust. The grass will seem greener on the other side, especially during the hard times, but true love is stronger than lust.

If you are separated, I hope you keep hope alive. If someone else has tempted you, I hope you decide to choose love over attraction. If you're just starting your life together, make the decision to love each other every single minute of the time you have on this earth together.

Life is short and time is the only thing we'll never get back. You can come to the end of your life regretting love, or cherishing what you experienced. Choose love.

Confessions From People Thinking About Divorce