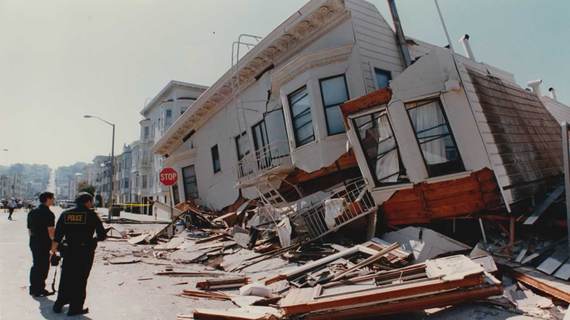 t was a gorgeous day in San Francisco: Sunny, calm, warm for the city - a high of 81F (27C). Yet everyone walking around appeared dazed. They looked whitened like zombies. They were all shook up. They were filled with dread and uncertainty as to what would happen next.

If you live in the Bay Area like I do, then you know it didn't get as warm as 81F on November 9th, 2016, the day after Donald Trump won the election for president of the United States. The day I was referring to was October 18th, 1989, the day after the Loma Prieta earthquake which rocked the San Francisco region, killed 63 people and knocked out a section of the San Francisco Bay Bridge. I was at my office in Walnut Creek seeing the family of a child referred to me as a behavioral pediatrician when the quake struck at 5:04 PM local time.

I had lived in San Francisco for 13 years and had experienced multiple small earthquakes prior to "the big one" in 1989. In fact, I remember quite clearly, coming back to New York City in 1978, feeling the earth rumble beneath my feet as a subway passed below and thinking instinctively, "earthquake". I knew then that even if my mind hadn't shifted allegiance from the East Coast to the West, my body had registered the change.

But all the earthquakes I'd experienced prior to Loma Prieta had a similar characteristic. By the time you realized, "Gee, this is an earthquake!" the shaking was over. There was probably a mild rise in heartbeat and blood pressure but if you lived here for any time you simply went on. Loma Prieta's 6.9 Richter scale magnitude was quite different. As the shaking in my office began (the ceiling and walls appeared to be waving in and out), first the mom of this family of five got up without speaking and stood under the doorway threshold. Everyone had learned somewhere that the door threshold might be more reinforced in keeping the ceiling from falling on your head. Then the youngest of the three children got up and ran besides her. The other two children got up next. Finally, the father and I ran to the doorway.

So there were six of us under this doorway. I remember to this day the youngest child was in front of me. I was prepared to shield him/her (that I don't remember) with my body if necessary. I had enough time to begin reciting the Hebrew prayer for the dead (Yisbarach, v'yishtabach...) when the shaking stopped. Maybe altogether 15 to 20 seconds had transpired. Yet, that short time represents an apogee, in terms of terror and the sense of loss of control, in my life.

Once the shaking stopped, the family and I ran out of the building (we were on the second floor). Everyone from the building had gathered outside in the parking lot. Someone had their car radio on and shouted "The Bay Bridge has fallen down!" The news was shocking. I knew then and there I was not getting home that night. Fortunately, I reached my cousin by telephone who lived nearby and had electricity! Power went out immediately in most sections of the Bay Area. I spent the night with her and her family. 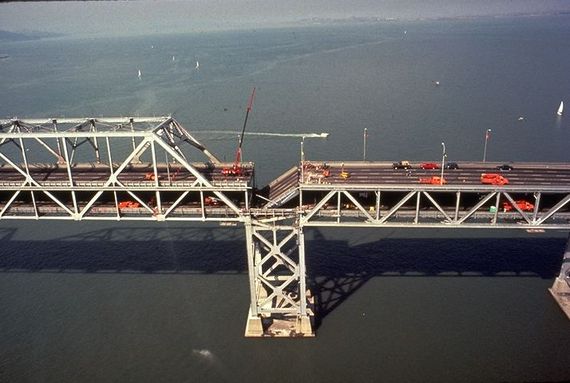 Denise and our kids were in San Francisco. I couldn't get through to our home but managed to call Denise's dad in New York (that was one of the weirder things - I guess local lines were jammed or not working -- but you could reach people long distance). He told me that Denise had called him and that she, the kids and the home were fine. Later we discovered that only one small unsteady wood figurine on a narrow ledge in our garage fell down. He told me he would relay to her that I was okay as well and that I would try to get back to SF the next day.

And indeed, while there were some minor aftershocks, the next morning I took the San Mateo Bridge, which had been already checked by authorities as sound, back to the Potrero Hill neighborhood where I lived in San Francisco. That's where and when on the day after the quake, I watched for the first time the zombies walk the streets on a warm, beautiful day in the Bay Area.

It only got to 75F(23C) on this November 9th in San Francisco. Still it was a beautiful day. But as I walked around Oakland and Berkeley where I now live, I got the same feeling of walking with the zombies, that I had nearly thirty years ago.

The whole politically conscious world was shocked by Trump's narrow victory achieved on election day. He lost the popular vote. With all the absentee ballots still remaining to be counted, Hillary will have received 2% more votes than Donald. He received overall the votes of only 27% of the registered voters. Only 57% of registered voters voted in this American election. Hitler's Nazi Party in its best showing, in 1932 garnered only 37% of the vote but by January 1933 Hitler became the leader of Germany.

How different the outcome in the U.S. (I don't know how German elections were run) would have been if, like in Oz, voting was mandatory -- turnout in Australia is usually around 95%. But receiving a fine of $20 if you don't vote (that's the law Down Under) would be very un-American. So as a result of the American presidential election laws as per our Constitution, which were designed to give the minor states more power, Trump, despite losing the popular vote, still triumphed in the Electoral College voting.

Aussie readers of Notes from CA may be puzzled that this -- being the second time in four elections that a Republican candidate won without a majority of the popular vote - why America doesn't amend its Constitution. This will never happen. Oh-oh, I used the word "never". If this election taught me anything, it's to never use the word "never" again.

So it feels like after an earthquake here in California. So much so because as with an earthquake that cannot be predicted, Trump's successful march to the Presidency, over and over again faced predictions that it would never succeed. I remember in Melbourne, especially at Davis Cup this past March, when I held up a sign that said "Isner for President", "Trump Can't Serve," "Trump Double-Faults", I was repeatedly asked by dozens of Aussie tennis fans (who wanted their picture taken with me to send back to their relatives in the States) - "Can he win?"

I, of course, like the pundits and American citizens everywhere throughout the world told the Aussies that day, "No way." I don't want much to go into why we were so wrong. But I think right up until election day, the polls were always off because many of the more moderate disenfranchised American whites didn't want to admit to a telephone pollster that they were leaning or planning to vote for Trump. It might have been too embarrassing to defend that choice because of the candidate's nature and antics. But in the end they decided his candidacy represented change, while a vote for Clinton would continue the status quo. Many simply refused to take Trump's misogyny, xenophobia and narcissism seriously. But the shock to everyone in America rates with the firing on Fort Sumter that began the Civil War, Pearl Harbor, the Kennedy assassination and 9/11.

Now we will see. I sense many parallels between the uncertainty and anxiety following the Loma Prieta earthquake and Trump's ascendancy to the White House. As it turns out there were no major aftershocks after October 17th, 1989. The Bay Bridge was repaired in an amazing 31 days! However, it took over 11 years to replace the double decker Cypress Street Viaduct of Interstate 880 in the East Bay which collapsed on itself and where most of the deaths occurred.

So there will short and long term consequences in repairing this nation's schism. On the short term I worry about local violence (Oakland and Portland seem to be leading the nation in anarchist responses). In California there's talk of secession (it'll never happen - there I go again making stupid predictions). Others talk of reconciliation along the lines of the Truth and Reconciliation Commission post-apartheid South Africa or how Tutsis and Hutus came together after the Rwandan genocide (neither process went perfectly but in the former a blood bath of vengeance was avoided).

Longer term I worry about an international crisis with a seemingly unstable man's finger on the nuclear button. Will America's history of stability prevail? I worry about a right wing response with loss of individual rights to any internal or external threat. Do you know that Lincoln suspended the right to habeas corpus in the North during the Civil War? It pains me to know that the Republicans, for the moment without doubt, the controlling party of America (at least on the federal and state levels) will choose the next several Supreme Court vacancies, leaving a legacy that may go beyond the time it took to repair the Cypress Structure in the East Bay.

My small hope is that Trump will actually challenge the power of corporate America that has unduly gained from an under regulated amoral capitalist economy. He's an insider that has totally benefitted from the power structure. Recall that the "trust buster," Teddy Roosevelt, also came from the business oriented and wealthy Republican party of his time. Trump well knows how the game is played to favor those in power. Will he use that knowledge for change or to prolong the inequality of this "rigged" system?

The most hopeful words come from Trump's opponent from the other side, not Hillary, but Bernie Sanders in his most recent op-ed in the New York Times. I had given money to the Sanders campaign but voted for Hillary in the California primary thinking she had a better chance of making sure Trump was defeated. Wrong, wrong, wrong!

I don't usually share extensive quotes in my Letters and Notes - my pieces run long enough as it is. But now, I break my own rules by running in entirety the next to last paragraph of Bernie's piece today:

"President-elect Trump is right: The American people want change. But what kind of change will he be offering them? Will he have the courage to stand up to the most powerful people in this country who are responsible for the economic pain that so many working families feel, or will he turn the anger of the majority against minorities, immigrants, the poor and the helpless?"

So I just don't know. I thank all my Aussie mates who've reached out and offered me safe harbor in Oz. I feel I must stay here to work for positive change and remain physically nearer my millennially aged sons who face a much longer future than I in America. But I just got a notice that my hard won Australian medical license expired. The letter asked me if I wanted to renew it. Damn right I want to.

Here in California, it's a time of uncertainty, worry and fear mingled slightly with the knowledge that change was necessary for this country and now it's coming - I hope with some compassion and understanding - not with anger and retribution. I must say it doesn't look good at this time. But the Bay Area did recover from the natural catastrophe of Loma Prieta. I just hope we can do the same with this societal rupture.