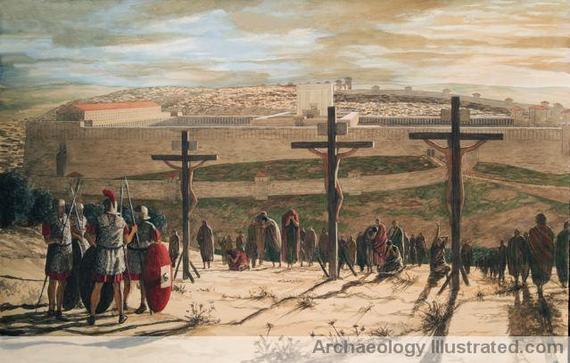 The reason it matters is that getting the chronology straight that weekend enables us to understand the early tradition that Jesus was in the tomb "three days and three nights," as well as the chronology of the "Last Supper" and the Passover and how the Sabbaths and festival days correlate together that year. This alternative chronology makes all our pieces fit from our various sources, including the Synoptic Gospels, John, and the Gospel of Peter.

The confusion arose because all the gospels say that there was a rush to get his body off the cross and buried before sundown because the "Sabbath" was near. Everyone assumed the reference to "the Sabbath" had to be Saturday -- so the crucifixion must have been on a Friday. However, as Jews know, the day of Passover itself is also a "Sabbath" or rest day -- no matter what weekday it falls on. In the year 30 AD Friday, the 15th of the Jewish month Nisan was also a Sabbath -- so two Sabbaths occurred back to back -- Friday and Saturday. Matthew seems to know this as he says that the women who visited Jesus' tomb came early Sunday morning "after the Sabbaths" (Matthew 28:1).

As is often the case, the gospel of John preserves a more accurate chronology of what went on. John specifies that the Wednesday night "last supper" was "before the festival of Passover." He also notes that when Jesus' accusers delivered him to be crucified on Thursday morning they would not enter Pilate's courtyard because they would be defiled and would not be able to eat the Passover that evening (John 18:28). John knows that the Jews would be eating their traditional Seder meal Thursday evening.

Reading Mark, Matthew, and Luke one can get the impression that the "last supper" was the Passover meal. Some have even argued that Jesus might have eaten the Passover meal a day early -- knowing ahead of time that he would be dead. But the fact is, Jesus ate no Passover meal in 30 CE. When the Passover meal began at sundown on Thursday Jesus was dead. He had been hastily put in a tomb until after the festival when proper and full Jewish burial rites could be carried out.

There are some hints outside of John's gospel that such was the case. In Luke for example, Jesus tells his followers at that last meal: "I earnestly wanted to eat this Passover with you before I suffer but I won't eat it until it is fulfilled in the kingdom of God" (Luke 22:14). A later copyist of the manuscript inserted the word "again" to make it say "I won't eat it again," since the tradition had developed that Jesus did observe Passover that night and changed its observance to the Christian Eucharist or Mass. Another indication that this is not a Passover meal is that all of our records report that Jesus shared "a loaf of bread" with his disciples, using the Greek word (artos) that refers to an ordinary loaf -- not to the unleavened flat bread or matzos that Jews eat with their Passover meals. Also, when Paul refers to the "last supper" significantly he does not say "on the night of Passover," but rather "on the night Jesus was betrayed," and he also mentions the "loaf of bread" (1 Corinthians 11:23). If this meal had been the Passover Paul would have surely wanted to say that but he does not. For more background on this discussion see "The Last Supper and the Passover." We also have a similar tradition in the Talmud which tells us, "They hung Yeshua the Nazarene on Erev Pesach"-which means on the "eve of Passover" (b. Sanhedrin 67a and 43a)