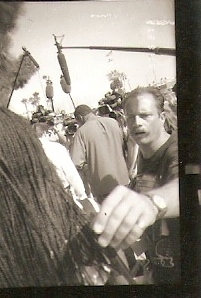 In August 1997, I confronted O.J. Simpson in a Santa Monica courthouse, went right up to him and asked, "O.J., have you had any luck finding your wife's killer?"

Simpson didn't like my question at all and didn't answer it, so I asked again. I was working as a reporter for Reuters at the time and Simpson was in court to give up his Heisman trophy, as part of the civil settlement in the double murder case.

Again, no answer. And then he became oddly hostile. "Nobody likes me, everybody hates me," he said in a mocking sing-song voice while looking right at me.

Except for two excellent reporters for Court TV, I was the only one asking Simpson tough questions that day. Some reporters even played extreme softball with him ("O.J., do you feel you're being harassed?," asked one).

Meanwhile, two cops, one black and one white, played air football with him in a corridor.

After a few minutes, one of the cops stopped me from asking questions -- but the judge overruled the officer around an hour later and said I could talk to Simpson. So I asked him again,

"OJ, have you had any luck finding your wife's killer?" After all, he had famously said he was looking everywhere.

He simply walked away and talked to his pals, the two cops, who seemed to enjoy being in the glow of their sports hero.

From my handwritten contemporaneous notes (which I still have): "Two cops, very buddy buddy with O.J." One covers the name on his badge as he passes by me, but I get it anyway.

At 2 p.m., after lunch break, I walk back into courtroom, having asked Simpson tough questions that the cops, friendly to him, didn't appreciate.

The harassment of me begins. Entered Department L. "We're closed," the female cop behind the desk says. I silently turn to walk away and a voice over the intercom booms: "Are you having any trouble?" Clearly, they're playing intimidation games with me in the courthouse.

Around 2:15 p.m.. Back in courtroom. The white cop starts badgering me (and no other reporter) though I'm sitting silently. A reporter for The New York Daily News starts in without any provocation whatsoever, screaming like someone off her meds: "Who's your boss?," she screams at me, though we had had no previous interaction. "Who hired you? I know all the guys at Reuters!" This "reporter" shuts up as soon as I show her my tape recorder.

Funny. The Daily News reporter had no questions for Simpson, who she could've questioned right there, but she had questions for me. Hmmm.

To me, it looked this way: a cop friendly to O.J. was pissed that I was questioning OJ harshly. The reporter, who seemed to know that cop in a friendly way, appeared to be playing tag team to provoke a fight with me in the courtroom.

Unfortunately for her, I didn't take the bait.

The court session ended and O.J. went outside to TV cameras, where - surprise! -- reporters who had been asking no questions suddenly thought up a couple. (That news conference was a very different event than the encounters I had inside the courthouse hours earlier.)

Inside the courtroom, where they had had one-on-one access to him, most of the reporters had no questions (though the judge explicitly ruled, after O.J. brought up the issue, that we did have a right to ask him questions). But with the cameras whirring, they suddenly found their tongues.

At that point, I asked O.J. about how much money he owed the I.R.S. He answered that he didn't know.

And then Simpson left the courthouse area to sign autographs for his many fans (as you can see in the photo, above, that I shot that day).