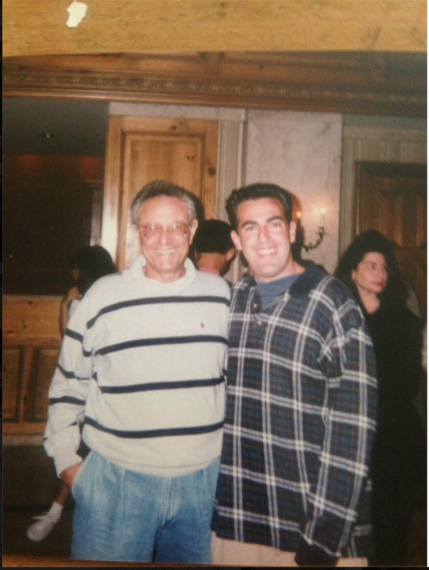 When I talk to people who've lost loved ones to suicide -- and I do more than you'd expect from a joke writer from the Valley -- the question I'm asked the most after "What the Fuck?" and "Does Brent's Deli deliver?" is "Will I ever stop thinking about this?"

My father took his life on June 5th, eight years ago. In the days following his passing, I was very consciously proud of going even a few minutes without perseverating on it. I'd give myself mental gold stars and smiley faces if I could somehow reach an hour where it wasn't the single, dominant thought. And at the time, the notion of going an entire day without thinking about it seemed like something out of the nerdiest science fiction series.

A few weeks ago, when I got a wonderfully thoughtful card from a co-worker and her boyfriend saying they were "thinking of me during what must be a difficult week", it actually took me a minute to realize this had been the anniversary of my dad's suicide. And it had passed with minimal pain or introspection. I knew it was coming. I felt a day of binge-eating black and white cookies and listening to sad Springsteen (The River, side 4) on the horizon. Plus, the anniversary is tucked between my daughter's birthday and my wife's. A combination of Simchas and sorrows, every year inextricably linked in my memory and my iCalendar.

The day after, I did mention to my wife, "remember what yesterday was?" But between the dual birthdays, my wedding anniversary, the end of school and writing gags for Kimmy Gibbler, the date came and went. Acknowledged, but not obsessed upon. Now I'm no mental health pro, but that seems like a good thing, bordering on terrific. Forgetting didn't diminish the significance of the day or my dad's life. It just means, life goes on. And that's something, when I was counting hours, I'd never thought possible.

That said, suicide memory has a way of sneaking up on you like an emotional ninja. I'm secretly envious of people who lost their parents in different cities than their own. And of my family members, who spread to all corners of the globe within a year of my dad's passing. (I think we can stipulate that New Zealand counts as a global corner.) Mind you, I'm not helped by spending 30 of my 50 years within walking distance of Ventura Boulevard. Sure, I might someday get my black Vans and boogie board retired in a ceremony at the Sportsman's Lodge. But everywhere I look, there are reminders of my dad. And the pain of his passing.

Last Sunday, we took my daughter to her favorite Italian restaurant in Encino -- my parents' hometown. And while I live only 5 miles away, there was something different about being in Encino, for a Sunday dinner, at the kind of restaurant I used to meet my parents. Even though 8 years had passed, I kept thinking I saw my parents walking in. Over and over.

This hasn't happened to me in years. When I worked in Beverly Hills, I'd run into men, who for a split-second, I mistook for my dad. Guys with a look of happiness and contentment and Fila brand loyalty that I'd always associated with my Dad, until the tragic end of his life made me rethink everything I thought I knew. 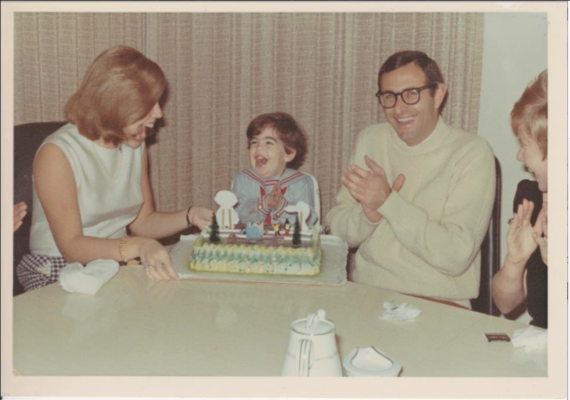 And that is one of the little discussed side tragedies of losing a loved one to suicide. Suicide robs you of your memories. And it becomes very difficult to remember your loved one's life or your own, without seeing it through the painful prism of how his life ended.

To this day, I'm still faced with conflicting goals. I want to think about my dad and my life with him as often as possible, to honor his life and keep his memory alive. But to do so, means re-accessing that pain. Every remembrance feels like a version of reliving the day of his suicide all over again.

With close to a decade having passed, the memories are still akin to putting your hand in a fire. It's not the all-consuming pain of having your body decimated by wildfire below King's Landing. More like having your hand linger too long over a menorah on the 3rd night of Chanukah.

I was always someone who took too much comfort in nostalgia. I was so obsessed with my childhood and 70's nostalgia that my high school friends and I started a book about my childhood and 70's nostalgia. My college dorm room was a museum devoted to seventies kitsch: Bay City Rollers poster, Farrah pillow, Mork doll. I can't say that helped me get laid. In fact, I can say with absolute moral certainty it had the opposite effect. But the accoutrements of boyhood always had a soothing effect on me. Now they don't. I can't hear a song that reminds me of growing up, without also thinking of surviving suicide. Seasons in the Sun, sure. But Billy Don't Be a Hero?

Sure, there are some childhood memories I'm better off forgetting: my Dorothy Hamill haircut, my endless stream of too-tight tennis shorts, seeing the Sergeant Pepper's movie in the theater 3 times on purpose. Those memories were plenty traumatic to begin with. They didn't need any extra help.

The trickier memories are the reminders of the death itself. Anything I experienced in the aftermath of the suicide is like a Doc Brown DeLorean ride back to 2008. The U.S. Open. The NBA Finals. Father's Day. I think about suicide every time I drive by IHOP and think of the plates and plates of chocolate chip pancakes I ate the week after, so distraught that I still didn't gain a pound. Grief may still be the world's most effective diet plan.

I drive by my dad's office and think of playing there as a boy and I get sad. I drive by the Neptune Society and think of the comedy of errors that led to my Dad's ashes being scattered without anyone telling me. The Sherman Oaks Galleria used to remind me of Pac Man and Jeff Spicolli, not settling a pre-funeral family squabble over a controversial box of See's Candy.

But the fact is, no matter how uncomfortable thinking about it makes me feel, it's nowhere near as uncomfortable as I feel not thinking about it. For too long, I tried pretending it didn't happen. I accepted the stigma associated with suicide and rarely spoke of it, to try and spare others discomfort. This only made mine grow.

In the years following my dad's passing, my writing partner and I sold numerous comedy pilots about families dealing with a patriarch's "sudden passing." We engaged in every manner of tortured verbal gymnastics to avoid saying the word "suicide." No longer. It's what happened. It isn't an ending I could've foreseen for my father, the happiest man I knew. But I can't help others and begin to erase the stigma without openly telling my story. I essentially "came out" as a suicide survivor a year ago in an earlier essay. Only then did my own healing and catharsis begin.

In short, my goal can't be to forget. The pain never entirely goes away. My goals are simpler. I want to someday think about my dad's life without only dwelling on the circumstances of his death. I want to access the pain, to live with it, without being consumed by it. I want to continue to speak about it honestly and transparently, without any sense of stigma attached. I want to make my own peace and to help others find theirs.

These seem like worthwhile goals. I don't know. Frankly, I'm still making it up as I go. But as forgetting the anniversary indicates, I feel like for the first time in a long time, I'm doing pretty well.