It's almost impossible for me to talk about having lost my faith without first dealing with the phrase "lost my faith." I understand how this phrase is normally used and I know that it has been around for some time.

It has been around longer than the 43 years that I have lived in my ultraconservative faith-based community, and much longer than the 25 years that I was a Pentecostal minister, before coming out as an Atheist. Even though I'm now no longer a believer in the divine or supernatural, I am still very much a believer in Hope, Love and Individualism. Which is why I have traveled the country over the last year preaching a secular message based on humanist values.

Yet, my profession of atheism still doesn't make the phrase "lost my faith" any easier to say. It sounds so negative. It sounds as if something that you value is no longer in your possession. Of course, I do realize that to most people it looks like that's exactly what has happened to me, but I don't feel that way at all. I don't feel as if I have lost anything; instead it's just the opposite. I feel as if I have found something very valuable, indeed. I have found myself.

I dearly wish that there was one day or even better, one particular moment when I stopped believing (lost my faith). It would make my story much easier to tell. But instead, like so many others in the growing Secular movement, there was no one particular event, no one particular day when faith suddenly disappeared. Instead, it was like my faith in the supernatural and all things related to it were a pot filled with water on the stove. For the first several years of my spiritual journey the burner dial was set to high-heat and the water of my faith was continuously boiling over.

Unbeknownst to me, as I entertained thoughts, concepts and belief systems outside of the Pentecostal doctrine that I had inherited, my belief dial was being turned down and the water temperature was decreasing. Along with doctrines, there were also new life experiences that generated thoughts that couldn't be easily ignored and over time they changed me. In other words, when a challenging thought came my way, I faced it and adjusted according. It took years for all of those small adjustments to add up to atheism. Eventually I simply recognized that I no longer believed.

My family, meanwhile, saw my deteriorating mental state as a potent symbol of the lost spiritual place that they believed I was in. I was not evangelizing nor was I trying to build my own ministry. I wasn't even committing myself to another pastor's church. They insisted that I was sliding spiritually and, one day, my grandmother came over to our trailer to pray for me. Kneeling in the trailer, grandma prayed for God to deliver me from the evil spirits that were causing my anxiety disorder. I knew, even then, that a cure for my panic attacks was not going to arrive through prayer -- this was a psychiatric disorder that affected my nervous system and it would be science, not faith, that would help me.

That is the power of the nervous system: we can think things that aren't true and feel and see things that aren't real. As I dealt with my anxiety and depression, suddenly the subjective no longer held the power for me that it once had. Indeed, what I was learning about the power of the mind just might explain some of the experiences I had in the past -- like speaking with God or hearing His voice. It was neurologically possible to hear an audible voice when there was no voice there. I began to entertain the possibility that there was an objective way of looking at my experiences and that this objective perspective might prove those experiences to be false. Up until that moment, seeing truly was believing -- but what did it say about my beliefs if I had not seen or heard anything at all?

Please don't misunderstand me, this realization was not speedy nor was it pain free. For two decades I feverishly struggled to maintain every shred of faith in the supernatural that I could find. Over the course of 25 years, my ever-reasoning conscious forcibly stripped blind-faith from my heart one layer at a time, until to my surprise, it was completely gone.

If there was a single day that was life changing, it wasn't a "lost faith" day but a day in which I lost hope -- hope that I would be able to remain in Christian ministry. I'm sure it's difficult for most to understand this type of dilemma, but even after realizing that I was no longer a believer I was still very much in love with my faith-based community and I simply could not imagine a life devoid of them.

Regardless of the devastating identity crisis that I was experiencing privately, I refused to except that my community would have to go the way of my faith. I was insistent that there had to be a way to work around my non-belief and still work for the greater good within my religious world. But I was wrong.

Late one night in May 2011, a member of my previous flock called seeking prayer for her brother who had been in a serious accident. As I searched for the right words to console her, speech failed me, and I finally realized that my ability to minister, which once had formed the cornerstone of my life had come to an end.

On a day in November 2011, a photo of me and my son at a freethinkers conference with Richard Dawkins was discovered on Facebook. The process of losing my faith had been a long one, but the process of being discovered and exposed as an atheist was instantaneous. I found myself shunned by much of my religious community, losing nearly everything I had known -- including my job, my relationships and my house. 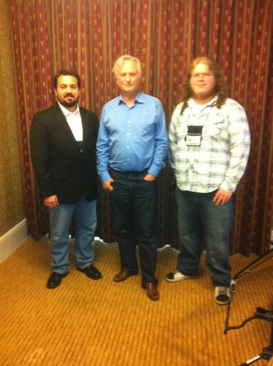 I had "lost my faith," my ministry, most of my family and friends and all of my finances but I had finally found myself.

I found that I had been a humanist all along and that was what had drawn me into the ministry in the first place, not something supernatural. I found that there is a roll in the world for me as a secular 'minister' and I found that the good I had experienced within my faith-based community was actually the goodness of people. This, more than anything I had experienced before, gave me hope for the future of our world.

Yes, you can say that I have lost my faith but I prefer to say I have finally found Hope.

Jerry DeWitt is an American author, public speaker, and leader in the American atheism movement. He is a former pastor of two evangelical churches, who publicly converted to atheism in 2011 after 25 years of Christian ministry. He is the author of the upcoming book Hope after Faith: An Ex-Pastor's Journey from Belief to Atheism, to be released June 25th.

Author, 'Hope after Faith: An Ex-Pastor's Journey from Belief to Atheism'