My son-in-law was out of town this week and so I had to be at my daughter's house by 7 a.m. to babysit my 1 year old grandson and 3 year old granddaughter. When the alarm went off I was not ready to get out of my nice warm bed and venture out into the cold morning. Secretly I hoped the children would sleep late and I could crawl in my daughter's bed when I got there. I did manage to get in her bed but I didn't get to stay long. Soon they were up and ready for breakfast.

My granddaughter is 3 and will usually do what I tell her, but the 1 year old is a different matter. Mischievous is his middle name. By the time nap time rolled around I couldn't wait. I don't know what is about children that makes them hate naps and adults love them, but I have always loved a good nap. The 1 year old went to sleep easily, but not the 3 year old. By the time she got her wiggles out and stopped fidgeting her brother was awake.

Sheesh, I was tired. The cleaning lady had been there and the floors were mopped nice and shiny. I knew my daughter wanted the house to look nice for my son-in-laws homecoming that night so I cleaned up the breakfast and lunch dishes and loaded the dishwasher.

Suddenly I realized I didn't see the 1 year old. He had been helping me (sort of) load the dishwasher. Now where was the little scamp?

I went in search and called his name softly because I didn't want to wake up his sister. Suddenly I saw him come out of a bedroom with a can of something in his hand. It was baby powder...and it was upside down. I took off in a run and so did he. Every step he took a puff of powder exploded around his feet. He reminded me the Charlie Brown character, Pig Pen, only instead of dust and dirt surrounding him it was baby powder. His short little legs were pumping hard as he laughed and kept running. I chased him down the hall and into the living room. By the time it was all over it looked like the first snow of winter had fallen inside the house. I grabbed the now empty container of baby powder and surveyed the damage to my daughter's formerly clean house. 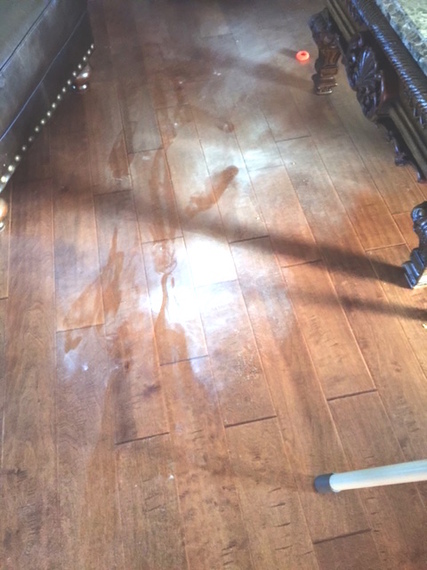 There were footprints in the snow. Little ones followed by big ones and I couldn't help it, I burst out laughing.

I knew my daughter wouldn't think it was funny but I thought it was hilarious.

Not only was the house a mess, the little man could not claim he was innocent. Not only had he been caught in the act. He was wearing evidence. 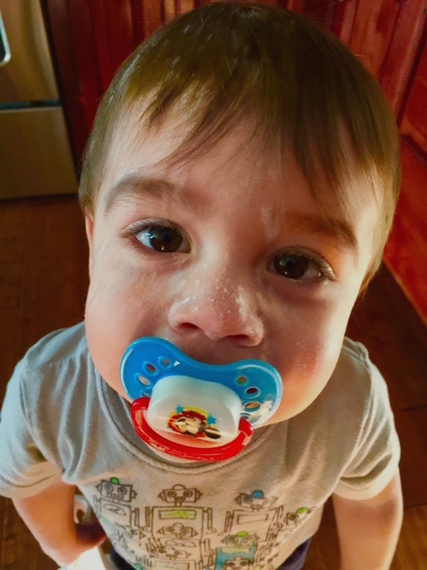 After I finally stopped laughing I cleaned him up and re-mopped the floors. The rest of the day was not nearly as exciting but I'll always remember the day I kept my grandson and it snowed inside the house!