I was a little girl, with a big vibrato, recording my first single in Newark, New Jersey. Okay, I confess: it was a demo. But still, there I was at Savoy Records, a label whose catalogue of R&B, jazz, and gospel artists included Charlie Parker, Dexter Gordon, The Clara Ward Singers and John Lee Hooker. Me? I was a ten-year-old white girl hanging out around a piano, at Savoy, listening to songwriters playing tunes for me to potentially record...songs that I, at ten, felt were too childish for me to sing. After all, a mature voice deserved a mature song. A song that rocked; or made me sad. Something I could feel. Perhaps this is why I didn't record my first real single until I was the ripe old age of thirteen for Kapp Records. But that's another story.

In this story, the owner of Savoy, Herman Lubinsky--loathed by many, loved by few, for his unfair treatment of his artists--introduced me to one of his most mistreated and extraordinary artists: Little Jimmy Scott.

Jimmy's diminutive frame was the result of Kallmann's Syndrome, a rare genetic condition that had also blessed him with a unique vocal tone.

"Sing for Susie," Lubinsky said to Jimmy. Soon as the owner left the room, the singer smiled at me kindly. Then he closed his eyes and sang. What I heard was a voice unlike any other...a voice that moved me from the first note to the last. I remember my exact thoughts as he sang for me: This man is feeling so much...he is singing with his eyes closed.

Each breath, each note; each word was a revelation. When he sings a sad word, I thought--he sings a sad note. No showbiz phoniness. He wasn't smiling as he sang; he was feeling.

Known for singing behind the beat, Jimmy had his own personal sense of time. Even singing for me, that day, in a small room at Savoy, he was in no hurry...allowing the lyrical textures of the song to connect with his own emotions and experiences. And that--takes time.

Oh what a gift it is, to a child, to meet an adult who shares the truth; bypasses the pretenses of human behavior that mask what is genuine.

"Either you give yourself and be yourself...or you blow the whole thing." These are the words of Little Jimmy Scott, framed and displayed on the wall, today, near my writing table.

I have thought about Jimmy at odd moments; unexpected places. Like when I stood beneath the Eiffel Tower, looking up at the very center of it, on a clear, chilly day, feeling alive, being myself... grateful to be where I was; who I was--aware that the ten-year-old girl at Savoy Records, in Newark, was very much a part of the woman in Paris.

I thought about Jimmy while singing a cappella on a sidewalk in New York City. And in Santa Monica, along the bluffs, singing inside a hive-like sculpture which amplified my voice with echo, its tone wafting toward the ocean in the distance.

And I thought about Jimmy when I learned of his passing in 2014. I knew, immediately, I wanted to pay tribute to him. So I wrote a song and recorded it. I am thrilled to have Alex Minasian, who played with Jimmy the last five years of his life, accompanying me on piano.

"The Day Little Jimmy Scott Sang Just for Me" is being released in honor of, what would have been, his ninetieth birthday. You will find it in all the usual places where music vies for attention. I would love for you to hear this very personal homage to a singer who deserves to be honored. 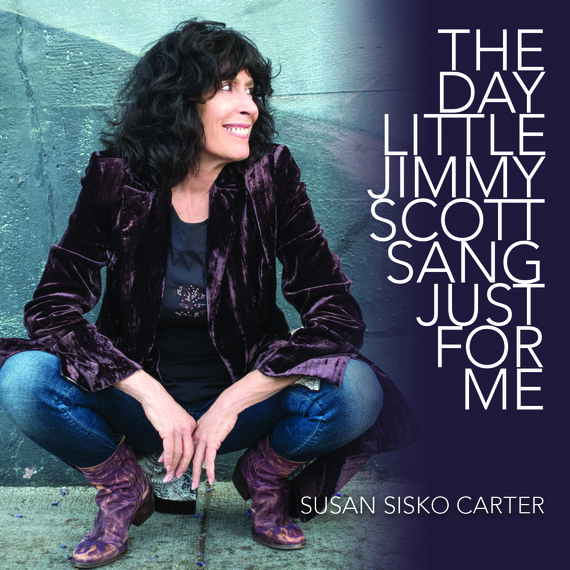