On a Wednesday in late May, I brought my 11-month-old Mabel back inside from a walk. I had just received my wife's text message that she was on the Metro and I was in a hurry to get the baby dinner before we left to pick her up. As I was holding the frozen fish under the faucet, I heard a loud crash.

In my haste to feed Mabel before Jenn got home, I had forgotten to shut the basement door.

Mabel was in her walker, which she had managed to get into the stairway. I found the walker tipped over on its side at the bottom of the stairs. Mabel's head was on the floor. She started crying immediately, which is landslides better than the alternative. I remember screaming "Oh God" after that split second was over when I realized what I feared had happened actually happened.

I lifted her out and tried desperately to soothe her. I took her outside, back into her room. I threw her up in the air, which had made her smile every time until now. She was still crying, but it was more distant.

After I got her into her car seat to go to the Metro, Mabel stopped crying. She stopped moving. She stopped everything. She just stared straight ahead. I became a new level of scared. I snapped and clapped to make sure she was still with me. She reacted, though barely. I set a ball on her wrist. She didn't even turn her hand over to grab it, only flicked her fixed gaze briefly in that direction.

Ten minutes later, we were at the Metro waiting for Jenn. I took Mabel out of her car seat hoping to comfort her. As I was unbuckling the straps, she threw up her entire lunch. Green beans covered her bib, her little yellow outfit and her car seat. She started crying again. I didn't know if that was a good sign or not.

Jenn appeared almost right in front of me before I even noticed. I had been somehow staring right through her at the escalator, looking desperately for her. Concern washed over her face just by seeing the look in mine. We buckled Mabel in and started on our way to the hospital. Jenn was my rock. After throwing up, Mabel was nodding off to sleep in the car and Jenn made sure to keep her awake until we got to the hospital.

Mabel threw up another couple times on Jenn's jacket and the hospital floor. And then sometime around 7:00 p.m., almost exactly an hour after the incident, her legs tensed around my wife's waist and she started waving to a little boy in the waiting room. She was grabbing for my glasses and trying desperately to find her way out of our arms so she could practice standing up again. I was some level of relieved.

Over the next four hours, her disposition only changed as much as you'd think an 11-month-old baby's would who was being held awake against her will in some boring, well-lit hotel with strange, blue-gloved people who kept touching her. We didn't have any toys and only one book, but Jenn managed to keep her occupied in the bed while I sat in the corner, trying hard not to let my baby see me cry.

In those four hours between the fall and the results of the CAT scan, I lived in a quantum state where two possibilities were equally likely. The outcome had already been determined, but both results were possible until the moment I observed the results.

Dr. Charles Schrodinger had developed an experiment in which there was a cat in a box and a vile of poison that had a 50 percent chance of killing the cat. Dr. Schrodinger hypothesized that the cat would remain in both an alive and a dead state until the outcome was observed.

I lived in that quantum world for a while, unsure of whether I would live the life of a man who dodged a bullet or one who had a constant reminder of a mistake he made.

Plenty of kids fall down the stairs, I thought. But this fall was violent. I had to go back home to get some formula. While there, I went down the stairs and got the walker, took it to the top, and pushed it down. I was hoping it would just slide down and hit the wall and fall over.

It flipped over every time. Crash after crash. I tried this three times until I put a hole in the basement wall. Sometimes it landed on its feet, sometimes not. But it always flipped. Granted, there would have been an extra 20 pounds of person in there, but it wouldn't have changed the outcome. The horizontal bruise on the top of Mabel's head was consistent with this.

I shouldn't have done that. I wasn't ready. I could no longer live in a world where that gentle slide down the stairs was a likelihood. Plenty of kids fall down the stairs wasn't doing it for me anymore. I needed something else. I screamed in the car "She's so little! She trusted me!"

For the first time since high school, I prayed. If there is a god, and if you are the type to meddle in our human affairs, I need a favor. And I promise you, I'll never ask you for anything again. I called my mom, knowing she would spread the word. Why not? And I started to understand religion a little better. Because thinking that someone else may be able to help right now brought me a little bit of peace.

At about 9:30 p.m., we were pushed down the hallway for a change of scenery. When we were called into the radiation lab for Mabel's CAT Scan, we were told one of us needed to go in with her. It was pretty obvious to all of us, including the orderly who just wheeled us down the hall, that I was in no condition to try to be supportive. This meant my wife was stuck with the job of holding our daughter's head down while she was forced into this noisy machine, screaming all the way. I could hear the screams as the "in use" light flickered above the lab.

When it was over, Mabel came out with marks on her forehead from the cloth my wife had to use to hold her down. They neatly framed the streaks of tears that had been recently running sideways down both sides of her face.

Mabel soon got over her most recent trauma and returned to her now-normal state of exhausted grumpiness. I asked the radiation technician how long it would normally take to get the results. She said it "shouldn't take any longer than 45 minutes."

An hour and 10 minutes later, I went out to the common room to ask some innocuous question about something else with the obvious undertone being when will I find out the fate of my daughter? I was still stuck in my quantum world.

Some blonde female doctor came in just to pacify us. This happens all the time. All parents have a story like this. She probably used the word resilient. She talked about head injuries and how rarely they end up being anything other than an anecdotal story. She put on blue gloves until Mabel started to cry and took them back off. She poked my daughter and said she looked fine. She never said anything about the CAT Scan.

She left. Five minutes later, another guy showed up. He regurgitated the same lines with slightly different words. I asked him when we'd get the results.

Really? You didn't think to lead with that?

We finally got out poor little exhausted angel home around 11:00 p.m. We fed her, read to her and put her in her crib. Only this time, I didn't want to leave her. I just wanted to stay with her until she was 26, had a steady job and I was finally convinced she didn't have brain damage. But I had to leave, for it was part of our bedtime ritual, and she would fight sleep to hang out with daddy if she knew I was there. So I left.

And then I went back up every 45 minutes to check on her. Since I didn't know how to look for brain damage in sleeping babies, I just made sure she was still breathing. I did this twice. The third time, I stayed up there in the rocking chair across from her for two hours, trying not to think of what could have been and still hoping that all the doctors, parents and janitors were right. When I got tired, I set my alarm to make sure I could check on her every hour. I don't know why. Nobody really told us to do that.

The first two days were the tough ones. For me. Mabel woke up the following morning like it never happened. She was smiling, playing with Teddy and already trying to climb back up the stairs.

My wife, still my rock, had taken off work so she could help watch Mabel because I was in no condition to take care of her myself. The what ifs were out in force. A new one would pop up every so often to give my anxiety some sort of variety. I went to see a therapist. She asked if I was sure Mabel was OK. No. She told me to go get a second opinion at a children's hospital. That would not have helped. If every doctor in the world told me she was fine, I'd still have my doubts. I didn't go back to the therapist.

After a week or so, I found myself in a much better place, even able to joke about it. I told you fish was bad for her. It felt good. For those first two days, not only was I in a dark place, but I was convinced much more darkness was to come. I still shudder occasionally when I go downstairs and see the walker next to the hole in the wall, but the darkness was very short-lived. And it was partly because I heard stories much like the one I'm telling now. In fact, a friend actually fell down her basement stairs while in a walker when she was a child, also landing on her head. And 30 years later, she's a veterinarian.

Mabel has moved on. She's walking and almost talking now. She doesn't speak about that night. She doesn't ask where the walker went. My wife and I still occasionally forget to shut the basement door, and we panic when we find it open. But we've also moved on, because Mabel needs us to.

A longer version of this essay, along with my wife's version, can be found on the Daddy Needs a Nap website. 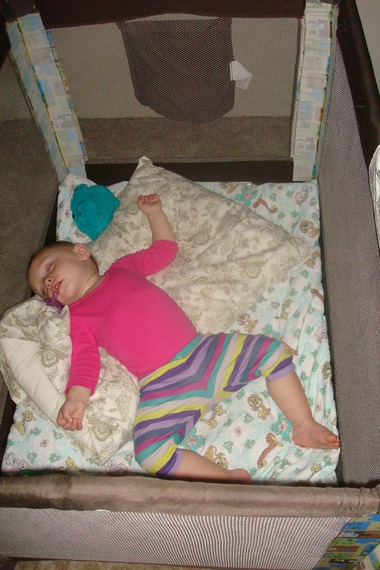 More:
Toddlersaccidentfathers and daughtersparents-toddlersParents
Newsletter Sign Up
Raise the kind of person you'd like to know
Subscribe to our parenting newsletter.
Successfully Subscribed!
Realness delivered to your inbox