Being a single mom with five kiddos at home means that I have to be incredibly budget-conscious. It also means that, while we find fun in lots of ways, they're not generally the same ways others find fun. We don't get to go to amusement parks or on big family summer vacations (though there's something to be said for the simplicity of a day swimming at the lake or eating an ice cream cone while watching the sunset and catching fireflies.)

So we don't typically go to movies when they're released in the theater, as it's easy to spend $100 on all of us going to a single movie. However, when Pixar's "Inside Out" came out, I was determined to take my kids to see it.

Luckily, our local theater has a summer movie deal on certain nights where all tickets are $5 and you get a free kid-sized popcorn. It was the perfect deal for my family. I bought tickets a week in advance and spent the remaining days getting progressively more excited.

When the day finally came and excitement had reached a crescendo, we loaded up and headed to the movie theater. Still trying to stay within budget, I'd packed a small Gatorade in my bag for each of my kids. I'm not the person who sneaks snacks/drinks into the movies, but I was willing to go against that rule just this once in lieu of doubling my movie investment by buying overpriced drinks for each kiddo at the concession stand.

"Can I just carry my drink in?" My 8-year-old daughter asked.

"Well..." I hesitated with how much information I wanted to give. "We're technically not supposed to bring drinks into the theater. So mom just wants to keep these in her bag until we sit down, then you can have it."

Her brow furrowed. "Is it against the rules?"

We parked and everyone got unbuckled and started to climb out, but there my daughter sat, not budging. "I don't want you to take a drink in for me," she said.

It's not super fair for the theater to charge $4 for a bottle of water, either, I thought.

"I'm not buying drinks in the theater because they're really expensive," I told her. "If I leave your drink in the car, that means you won't have one for the movie."

"Come on," her brothers and sister prompted. "Let's just go. It's not a big deal."

She thought some more, looking around at the faces of her family. "Then I don't want a drink. I'm not going to lie, and it's not fair."

As I watched her eyes get a little teary and the line set in her jaw, I asked myself what the hell I was doing. What was I teaching my children? Was I really engaging in peer pressure to persuade my daughter to go against what was truly the right thing to do? Was I that willing to save a few bucks that I'd skew her moral compass to do so?

She was absolutely right.

And as inconvenient as it was for me, as irritated as I was that she was taking a stand over something so silly, that was the truth of the matter. She was absolutely right. And I was in the wrong.

I nodded at her, then unloaded all the drinks from my purse and left them in the car. We went to the movie (which was every bit as excellent as I'd hoped) and I spent an additional $25 on drinks for everyone. It was worth every cent.

When we got home that night, I sat down with my brave, headstrong, big-hearted girl.

"You are hard to parent sometimes," I told her. "Because sometimes I wish you would just do what I ask you to do instead of arguing. You are very headstrong...that means that you have to do things your way or it's a big problem for everyone."

Her eyes filled with tears and I pulled her onto my lap.

"But just because that's hard to parent sometimes doesn't mean that it's not everything I love about you. You are so brave. You are so strong. And tonight, you were absolutely right. That was not the right thing to do, and it wasn't fair. And even when everyone stood against you and even when you were told you wouldn't get a treat, you stood your ground for what was right. That's important. There aren't enough people like you in the world. And I hope you never lose that part of yourself.

"There are going to be lots of times in life where everyone will be doing something that's not right, and they'll pressure you to do it, too. I hope you always have the strength and the courage to stand up for what's right, even if you're standing alone. Your voice is important, and your voice can make a difference. I'm so proud of you tonight."

When she went to bed beaming, I sat a little longer, thinking about how my 8-year-old daughter taught me strength and courage in a situation where it would've been much easier to follow the crowd. I thought about her, at a party at sixteen, and hoped that she would have the same convictions when faced with alcohol, drugs, or sex. I imagined her at thirty, dealing with sexism and a glass ceiling, and I hoped that she would retain that character well into her adult life, taking on bigger and bigger challenges along the way.

I sat for a few minutes and marveled at this little girl, whose convictions were probably stronger than my own, and I felt so grateful to be her mom. Life lessons tend to show up in the unlikeliest of places. 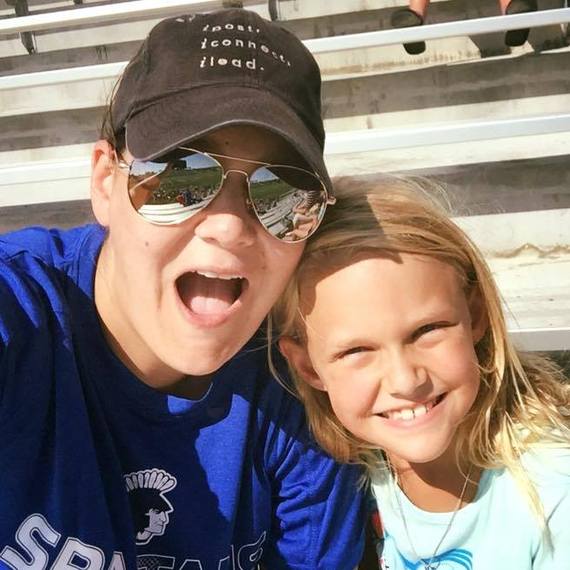 Fun time with my future CEO.

Kasey Ferris is a freelance writer and mother of five. She eats too many Oreos and thinks life is much better when you're laughing. Find her at facebook.com/KaseyFerrisWrites.

More:
ParentsParenting mothers and daughterssingle parents
Newsletter Sign Up
Raise the kind of person you'd like to know
Subscribe to our parenting newsletter.
Successfully Subscribed!
Realness delivered to your inbox

Writer, mother, eater-of-Oreos. Not necessarily in that order.