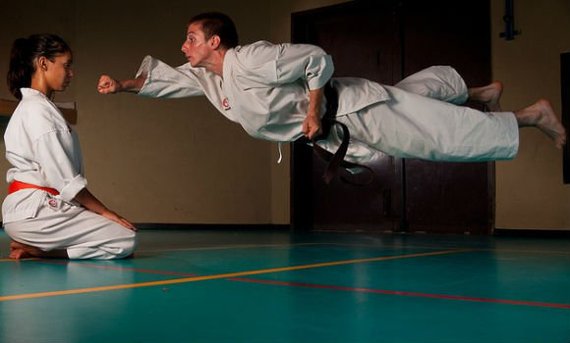 My son is six. He used to love playing with cars, like from the Disney movie. The car phase seemed like it would never end. I'd get home from work and the movie would be playing in his room while he obsessively lined up every car (including doubles of each one) as neatly as he could muster with his toddler hands.

Then one day, out of the blue, he moved on. I don't think he's played with one of his cars in three years. I guess that's how it goes.

The next thing was Angry Birds. It started when he saw me playing the first version of the game on my phone. He asked if he could play and I obliged by handing him the phone. He only quit because my battery died.

For the next several months, my wife and I stepped on rubber black and white birds with the occasional "ice" bird thrown in the mix. It got old pretty quick, but the day he started watching Teenage Mutant Ninja Turtles?

I thought I'd hit the jackpot.

I grew up watching Ninja Turtles. The original live action movie from 1990 was one of the first movies I ever remember watching on VHS and rewinding it over and over. Martial Arts was something I'd always wanted to do but we couldn't afford it when I was a kid, so when my son began watching the cartoon and doing roundhouse kicks in the living room I knew we had to get him in the white suit.

He is my oldest child and the only experience I've had with youth sports as a parent is Kindergarten and 1st-grade basketball, which is more like watching a herd of cats chase a ball of yarn and a laser pointer. Karate was different. There's something about seeing your kid happy about something other than the fresh chocolate chip cookies you made him.

There's something about seeing them work hard at something and not achieve it the first time, but keep trying.

The first day he came home with his white suit he put it on and I felt proud. I felt proud that he was able to do something he'd been wanting to do for a long time. I know what that feels like. And I also know what it feels like to not get to do something you've wanted to do for a long time. Knowing both ends of the spectrum made me even more proud.

He put on the pants and the top and then his mom tied the belt around him twice and he stood there, just looking down at it, he was proud. I think it was the first time I'd seen him truly proud of something other than a picture he'd colored. It was almost transcendental.

Two weeks into his karate lessons I came home from work and he was sitting at the table. "Hey bud, how was karate?"

"What did you learn today?" I asked.

"Umm...we learned how to kick." He said without looking up.

"Are you going to tell him about what you got today?" My wife chimed in.

"Oh yeah! I got a red stripe!" He said, grinning from ear to ear.

"A red stripe! For what?" My son was glowing like a full moon.

"I got it for doing really good kicks!" He said as he stood from his chair. With a couple of swift movements, he positioned himself in a karate stance and then kicked at my leg. "Like that!"

It was the first time, as a father, I'd seen my son proud of something he'd accomplished. He ran over to the table and grabbed his belt. The instructor had placed a piece of red electrical tape around the end of the belt. My son was on his journey officially now.

A journey that had no limits.

It wasn't about the red stripe. It was about the realization that there was a time in your life where you made that first real achievement, the one you'll remember forever. For me, it was my first strikeout as a pitcher. For you it may be your first three-pointer. For my son, it's the stripe.

It's funny how that all started because of the Ninja Turtles.