I remember that morning clearly. My kids were eating breakfast in the kitchen and I was in the next room, rounding up some wayward toys and sippy cups. Suddenly, I heard my daughter shout, "Mommy, he broke your glasses!" Running into the kitchen, I realized that my 1-year-old son had grabbed my glasses off a nearby counter and stretched the frame until it broke. Needless to say, I was not pleased.

Shortly after, I was preparing for the beach, frantically gathering sunblock and towels. Out of nowhere, my son grabbed a piece of "medical equipment" from my daughter's Doc McStuffins' bag and proceeded to scratch the screen of our new LCD TV.

At that point, Mommy had an awakening.

My son was no longer a baby. He was no longer "cute." He was a destructive force that was wrecking my home. If I didn't do something soon, I was going to have to invest in toddler-damage insurance to protect my home from a force more disastrous than nature. I had to face facts. I no longer had a sweet, innocent infant. It was time to begin holding my son to a higher standard.

It's hard to pinpoint the moment your child makes that transition from helpless, adorable baby to willful little person. It can be hard to see them as a growing child when you're carrying them in your arms, or they're repeating a handful of monosyllables, or you're changing your fourth diaper that morning. (I imagine the line is even blurrier for moms who nurse for an extended time.) That said, for me, there were signs I could no longer ignore that my son was developing into an evil genius:

Disciplining a child under the age of 2 is challenging. Often, by the time they're in time out, they've already forgotten their transgression and are staring down a random marker on the floor, calculating the trajectory from floor to mouth. But the process has to begin somewhere, and for me, it was with a simple acknowledgment: I no longer had a baby --- and, since he's my youngest, I never would again. Yes, this admission was difficult. But sooner or later, you reach a point where you're fed up. Where you can no longer live with a pint-size tornado (no matter how cute) tearing apart your home. My son sees a lot of his time-out chair these days. But he's also developing an increased understanding of the rules of the land -- even if at times he ignores them.

As with everything else in his development, we're taking things one step at a time. In the meantime, I'm locking up my glasses. 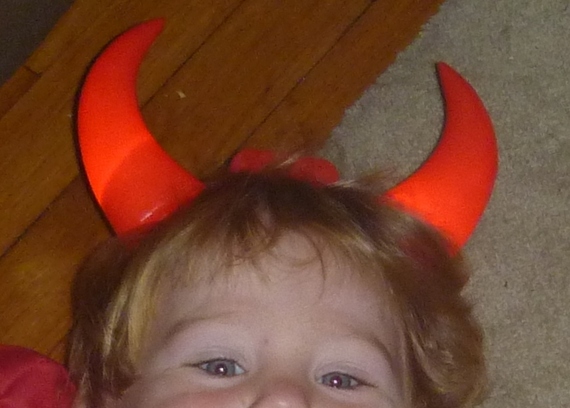