The judge and jury have spoken. I have listened. Children do not belong in theaters, or so the numerous messages I got stated so. I honestly don't care for that debate. It can stay in the realms of social media. Where parenting debates end very well and are solved in grand accord.

I could have written it to the person who said Vito didn't need therapy because cancer will probably kill him some day.

Or the guy who said we should have just let cancer kill Vito because we don't need more special needs kids.

Or the woman who messaged his page saying God knows what he is doing and obviously gave him cancer because he did something wrong.

Or to the woman who said my 2-year-old didn't belong on public playgrounds, because he had a seizure and scared the other kids.

Or the guy who said, why cure him if he is just going to be a retard?

Yes. I could write it to many people. TOO MANY people. This is not the first time we heard a comment about Vito and unfortunately, it won't be the last. For all of those stories and more, I repeat:

When we tell our children to look away or don't look at people who are different, we are teaching our children that those children are invisible and to ignore them.

When we tell our children certain people should not be brought out in public, we are teaching our children to hide differences because they will not be tolerated.

When we tell our children, "Oh no, another person saying we need rights, why must they keep talking about their kids!" We are teaching our children to not fight for what they believe in.

We teach discrimination of all kinds. We teach our children how to approach differences. We teach hate.

Besides the parenting debate, something beautiful stemmed out. A discussion about judgments and how to approach those who are different. Awareness of pediatric cancer treatments and its complications. It's amazing how that little article went around the world and made many people angry but also stemmed so much awareness.

I never expected that post to go as far as it did. Actually, I still laugh at the messages I got blaming me for Yahoo! posting it as news. I have no say over what the news is. Or that PG movies aren't for kids -- Frozen is rated PG. But, I am glad there was discussion about it. A discussion about differences.

You can say this all happened because Vito was at a theater, that the world was appalled with my horrible parenting skills, or you can say my post actually struck a nerve with people about perceptions and judgments. I'll leave that debate to Twitter.

There's many lessons I wish to teach my four sons. Many. Some of them include always standing up for what you believe in, even if it means admitting you may be wrong. I admit it, the movie theater may not have been the best idea. But, the incident there was not the only obnoxious comment my son Vito has experienced, nor will it be the last. Therefore, I will still fight for him when he needs someone to fight for him, and still admit I'm wrong when I make a mistake.

The other lesson I wish to teach my sons is to leave the world a better place. For 195 days, I held my son as chemo ravaged his body. I watched him learn his milestones, then lost them. I watched him learn them again, only to lose them a second time. Now we are slowly regaining ground. Every day, I promised him I would advocate for him. I promised him if he wanted to run a marathon, but couldn't walk, I would push him. If he wanted to climb Mount Everest, but his legs were too weak, I would carry him on my back. Our world has come so far with disability awareness and accessibility. But, we still have so much more to go. I promised my son I would help him accomplish his dreams and open more doors for kids like him.

I hope you never find yourself in the special needs world. But, if you do, I hope it is an easier road. Every day we hope for an easier day than yesterday. That more opportunities have come with the dawn. That one day, there will be no societal differentiation, only medical. Special needs moms like myself fight so the person behind us, doesn't have to.

Vito, you are unstoppable! 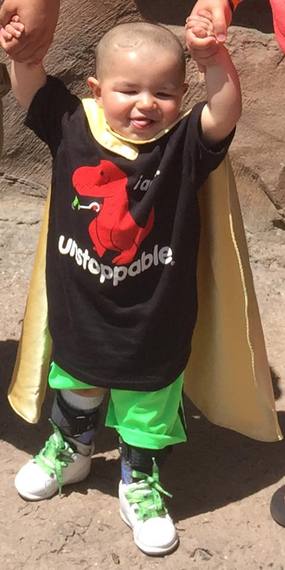 Voting Made Easy
Register to vote and apply for an absentee ballot today
Register now
More:
Advocacy medulloblastomaParentsspecial needs childrenparents-moms
Newsletter Sign Up
Raise the kind of person you'd like to know
Subscribe to our parenting newsletter.
Successfully Subscribed!
Realness delivered to your inbox