I can still remember where I sat on the floor in the room, the Southern California light pouring in that way it does, diagonally through the plate glass windows and bending through the blinds. There were about twelve of us sitting in a circle, leaning back against folding cushions, our knees popped up in front of us. Each of us held a fairly new babe in arms -- some nursing, some sleeping, some lying on our legs trying hard to keep their eyes open or to produce an effective burp. The mothers surrounding me were different ages and different shapes and sizes, but all of us shared a common quality: a wild look in our eyes, perhaps a button askew on our shirts, hair thrown up in messy buns or that lay rumpled on our shoulders -- the hallmarks of sleep deprivation and the exhaustion of new motherhood that soaked our very bones.

It was a breastfeeding support group for new mothers, and it had taken me three attempts that week to get there. The first morning, I gave up quickly. I hadn't slept at all, and the baby -- my first -- had finally fallen asleep on my chest that morning in the navy blue recliner my father had bought me when I was 36 weeks pregnant and unable to sleep horizontally in my bed anymore. We slept in that recliner together, my firstborn and I, for the first 17 weeks of his life. But that day, he was only 6 weeks old, and I was still deep in the throes of not knowing what to do, what to expect, or what to think. So when he slept, I did not move.

The second time I tried to make it to the group, I got as far as trying to dress myself and the baby before I gave in to frustration. He cried whenever I put him down -- deep, keening wails that shamed me and made me feel like I was doing everything all wrong. My postpartum hormones and my new mother anxiety paralyzed me. I finally sat on the floor of my bathroom in my underwear and half-washed, wet hair and just held him in my lap, sobbing along with him. I didn't know what else to do. By the time we were both calmer, I had missed the class.

But that third attempt, I began preparing several hours before I needed to leave, and I finally managed to dress the both of us and get us to the small, humble building in Santa Monica that would become a lifeline for me, The Pump Station. I stumbled in and found my place on the floor, gingerly putting the infant seat behind me by the wall and configuring myself so I could nurse while we talked. As our leader -- a maternal woman with long brown hair and a soothing, calm voice -- began the discussion, I exhaled. I had tried to have brunch with a friend that week, but the baby had screamed through lunch. I had fumbled with my shirt in the middle of California Pizza Kitchen, willing him to stop screaming, praying I could get him latched and calm without all of Los Angeles as an audience. But here in this quiet, sunny room, I could relax. I could fumble, he could cry, and no matter what, it was OK. I was safe.

She took her time with me, with input from the other moms, showing me a new way to hold my baby so he wouldn't choke when he nursed and asking me questions about his crying and how we were dealing with it. I tried to describe the hours every night when nothing worked, when we bounced on exercise balls and drove in circles in the grocery store parking lot at midnight with him in the backseat just to get a break from holding him. None of the parenting books could tell me what to do; I had read every single one of them. My pediatrician was at a loss, unable to explain this crying in an otherwise healthy infant. He called it colic. I felt duped. This was not what I expected -- not at all -- and there seemed to be no end in sight. No one could tell me when this would get better. I felt myself sinking. I felt myself failing.

Then my very wise group leader -- a woman I would come to love in the way you love someone who saves you from drowning -- said something to me that I will never forget. "One thing I have found that helps with babies like yours," she said, quietly and slowly, "is to take them out in public."

My eyes widened. Did she not understand? Maybe she did not hear me when I told her that if we went to a restaurant, the moment his eyes fluttered open, I shot like a bolt to flag down my server and yell, "Check, please!" This baby was not fit for the public.

"I know it sounds strange, or maybe scary," she acknowledged, reading my face. "But if you can just take him somewhere outside, where you can be around people... well, sometimes it helps to hear strangers tell you how sweet and wonderful he is. Sometimes it helps to remember that he is really a special little guy." She paused, and she looked directly at my firstborn, who was -- of course, since we were actually in a safe space for him to fuss -- sleeping like a proverbial baby in my lap. "He really is beautiful."

I looked down, bewildered, and I saw him, really saw him, for the first time in maybe weeks. For so many hours of our days then, he was a squalling, squawking blob or he was a new appendage that made me ache. For the six weeks since he had emerged from my body, all I had really known was exhaustion and a feeling of being broken. My fervent, fevered need to take care of him better -- to handle my new body and my new baby and my new life -- had clouded and consumed everything else for me. But he was, in fact, a beautiful baby. He was everything I had hoped for and everything I wanted. I just needed enough calm and enough sleep to see that again. I needed my hope back.

After that day, I made it a point to take my baby out in public as much as I could possibly muster, and my leader was absolutely right -- as strangers would stop and coo at him, I felt that cocktail of hormones and love course through my veins and give me strength and endurance to make it through my day without resorting to sobbing on the floor in my underwear. My firstborn had colic until he was 5 or 6 months old, and he proved to never really be an "easy" baby. But he was my baby, my beautiful baby, and our outings helped me remember that. And it did, in fact, get so much better.

That once colicky newborn I took all over Los Angeles is now 11. So these days, I make it a point instead to stop and tell mothers of tiny babies how beautiful and special they are, even if they are in mid-squawk and especially if the mother looks flustered. I am paying it forward, because that advice and those words I received at my support group saved me. My leader threw me a rope that day, just when I was feeling the tide pull me under. We all need to be ready to throw ropes to other moms when we see them struggling; we are, after all, the ones who know how long the rope needs to be to reach them, because we have been there. Have a rope ready, just in case. 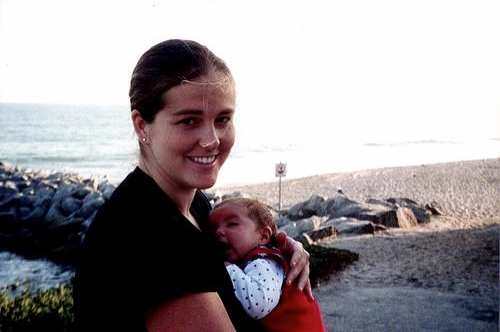